First of all, please make sure you've read the Ebola page. This is a tiny part of a bigger process: we look at needs, think of ideas, prototype them, document them, show them to external validators, refine them ... and finally we tell it like it is: you tie your own shoes with your own hands. Don't make anyone else responsible. You've been warned.

Hazmat suits are not highly practical:

Recent studies (such as this) suggest time at the bedside may be an important variable: High-quality supportive care is thought to have contributed to the larger number of survivors. However, two limitations compromised the quality of bedside care: staff were too few in number; and the duration of time spent providing care at the bedside was too little, due to dehydration and over-heating of clinicians wearing personal protective equipment..

Maybe we could design something else. Maybe not better in an absolute sense, but useful for some of the tasks that need doing.

The following is just a provocation. You know: the kind of "bad idea that might lead to a better idea if we work on it".

We'd like to give the best care, together with the best protection. The kind of care you give to a baby. With the protection given by, well, an incubator. But let's reverse it, and call it an excubator:

It can't possibly work, can it? It's probably dangerous, if you think you're protected when in fact you're not. So it needs careful testing, just like you would test anything that might be dangerous. 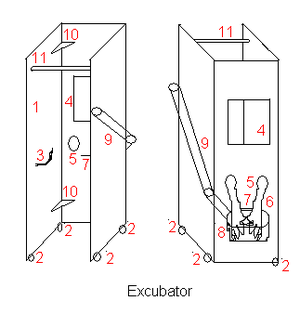 More graphic details. The plan is to build each module, and put pictures instead of sketches.