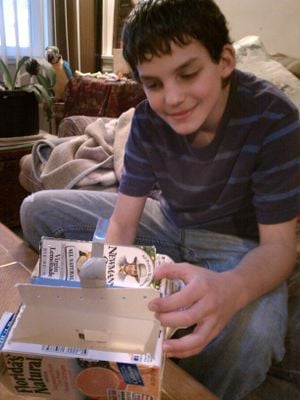 The project outlined in this page is a small and manageable worm bin designed so that kids ages eight to twelve can recreate it, without the help of their parents, following the instructions. Giving a child the opportunity to build a worm bin enables them to get hands-on experience with composting and sustainable living, and allows them to see waste transformed into something useful!

After the projects have been finished and released, material regarding the details of the various projects will be compiled and published tentatively due out Fall 2011. The design outlined below is a product of Onycophora, a group of the Introduction to Design Engr215 students.

Locally Delicious is an organization based in Humboldt County with a commitment to raising awareness of the importance of community and sustainable living. Locally Delicious and Humboldt State University's Engr215 Introduction to Design class collaborated on a series of projects in the Spring of 2011. These projects are geared to help raise awareness of the importance of living and eating healthy, especially among children, and will be published in Locally Delicious' upcoming book, "Lunch box Envy." The worm bin described in this page was engineered by the Engineering 215 design team Onycophora.

The "Wormland" worm bin is specifically designed for children ages eight to twelve, and therefore follows a unique set of considerations. In the design of this bin size, cost, and the ability of the child were all taken into account. The final design consists of various materials found in every home and drugstore. Old milk cartons and tape make up the design, and scissors and a pencil are the only tools required for assembly. The finished design will be able to process roughly a handful of organic material per week with proper maintenance, as described in our building instructions.

The problem statement addressed by the "Wormland" bin project was to engineer a small and manageable worm bin that can be recreated and used by children between the ages of 8 and 12 years old based on the criteria of Locally Delicious. A table further discussing our criteria is outlined below.

The design is composed of empty half gallon milk or juice cartons. Inside of the cartons is a migration hole that allows worms the access to both cartons. Worms are fed on one side of the bin while castings can be removed from the other carton. This process will be repeated as the worms will migrate towards the food and leave castings behind. Each time the food is digested new bedding is inserted. In addition, this modular design allows for expansion of the worm bin to meet the needs for digestion of larger quantities of food.

To test the cardboard milk carton worm bin, we placed a cut off strip of the carton in a glass of water. This test was meant to determine how well the material of the carton would react to extreme weather conditions over a period of time when cut. We also placed a cut up strip of the carton which we had taped back together in the glass of water to determine how well the tape would hold up. After leaving both tests in the glass of water for two weeks, the strips of carton and tape have little to no damage. Because of these promising results, we have determined that cardboard milk cartons are a good material to use for the Kids Worm Bin design.

When testing with children at Alice Birney School in Eureka, California, the results were positive. Three nine year old children constructed the bins with the help of two Onycophora team members, and appeared to enjoy the process. The most difficult steps for the children were those involving poking holes. It was found that not only do pencils work better than pens, but milk cartons are easier to penetrate than the provided Dole brand juice cartons. In addition, the cartons became structurally unsound after the cutting of the migration holes, making it more difficult to poke holes for aeration and for the top flaps.The favorite part of the project for the children we tested with was filling the bins with bedding. They enjoyed shredding the newspaper and picking grass and leaves to make a comfortable "home" for their worms. 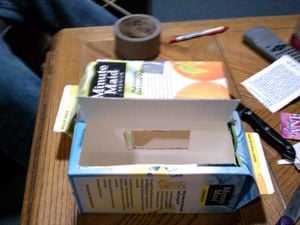 The overall design of the kid's worm bin is such a simple one that it allows for various small changes of material and location. The "bin" itself could be constructed of any waterproof, easily accessible material, not just milk or juice cartons. The design works well both inside and outside, and can be easily placed in any area due to its small size. Though working for a variety of ages, testing results led us to believe that children eight to twelve years of age will be fully capable of building a "Wormland" bin if provided with adequate instruction.

Once implemented, it would therefore be important to take into account not only age and ability but adult supervision and help. Though this is a kid's project, it is recommended an adult assists with implementation and instructions to ensure proper building and safety.

The next steps of the project will be the publishing of the designs and findings in the book compiled by the organization Locally Delicious, and its implementation by students. We hope that anyone who attempts this project is satisfied with their results and learns something about red worms and waste in the process.