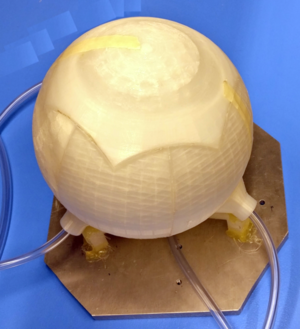 Goal of this project is a design of a tool for attitude system testing for CubeSat class of satellites. It is based on the airbearing principle. Satellite is to be placed and secured inside an enclosing sphere. This sphere is then to be placed on the tool's platform part, which is connected to the source of compressed air, that it distributes to the nozzles. The nozzles are positioned tightly on the sphere surface and create thin air layer in between them. This setup is to provide a frictionless environment for the satellite.

Test bed design presented here is only meant as a proof of concept at this stage. It does not support mounting of the satellite inside the sphere and the platforms design is still preliminary.

Satellite systems usually have a need for attitude control as they are equipped with payloads, communication antennas or some other module whose effectiveness depends on its orientation in space. Attitude systems are complex and their development requires a substantial effort. Additionally, as it is typical for many space related development activities, testing of the system can be very hard as it is difficult to recreate space environment in a laboratory.

In case of attitude systems, space environment property that needs to be recreated is frictionless. Satellites are in the constant state of weightlessness and are minimally constrained regarding their rotational movements. There are several ways how the nearly frictionless effect can be produced in the laboratory including airbearing, magnetic levitation and active rotational simulation.

Attitude control systems can be classified as active or passive, depending whether the system creates torques itself or leverage the external environment forces that act on it with its physical configuration. Active control can, for example, use reaction wheels for internal or magnetorquers for external momentum exchange. Magnetorquers require external magnetic field, and for the case of Earth orbiting satellites, this is satisfied by the Earth's magnetic field. Significant space forces that can be used for passive control include solar pressure, gravity gradient and atmospheric drag. Satellite can have its shape and mass distributed in a way to be affected by this forces such that they create meaningful torques. Equipping a satellite with a static magnet can as well generate torques that would help correct its attitude.

CubeSats are a class of small satellites whose dimensions are approximately a multiples of a 10x10x10 cm cubes and their weights are between 1 and 10 kg. Their small sizes and low weights allow that they are completely mounted on a frictionless test tool. Bigger satellites usually would only have the attitude module tested, without the rest of the system.

Outcome of the project is a tool for frictionless attitude testing of the CubeSats. It should be able to accommodate different satellite sizes. Most popular CubeSat formats are of 1, 2 or 3 units size. CubeSats can have both reaction wheels and magnetorquers, thus properties of the surrounding magnetic field are important. Test tool will unavoidably alter the physical configuration and mass distribution of the satellite. It is significant to keep these alterations small as satellites weights are already small to begin with. Also, possibility to externally apply torques would be a great addition to provide more realistic simulations.

Goals can be summarized as:

These are long term goals. The designs and results presented below are currently only for proof of concept purposes. Design is purposefully smaller and only goal to be achieved at this moment is frictionless.

Airbearing technique has been selected to provide frictionless because of its simplicity. Thus, the tool will comprise of two parts, the satellite enclosure and the nozzle platform. Enclosure acts as the interface between the satellite and the nozzle platform part. In order to enable complete rotational coverage, it is decided to make a full spherical enclosure for satellites. Spherical enclosure, being symmetrical, makes it easier to preserve the Center of Mass for the satellite and to equally distribute parasitic Moments of Inertia. Most of the existing airbearing solutions have a hollow half-sphere for the platform, which is excellent to provide a natural stability of the enclosure. However, this kind of designs cover a big portion of the enclosure, limiting the possibilities for external interaction, which is needed if the simulation of the disturbances is to be realized. Thus, a different approach is taken, with 4 small nozzles. Also, in order to minimize the effects on the local magnetic field, the whole tool is to be made out of plastic. 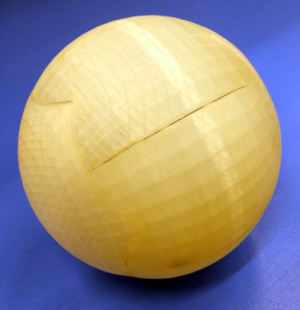 Spherical enclosure is supposed to house a satellite inside it, and so it needs to be separable at least in two parts, and for the ease of handling, having only two parts is desirable. However, for the manufacturing purposes, the sphere was divided in 8 parts. Intention is to glue together the parts so that there remain only two halves of the sphere.

There are two types of parts for the sphere, the polar parts, of which two are needed,and six side parts. Side parts have additional extrusions on their sides and corners. These extrusions are designed so that they help interconnect and put together the parts. Also, they are useful as the gluing surface, or as a soldering material, to bind the parts together. Both polar and side parts have little loops added to their inner side. These loops are intended as a help during the sphere assembly. Strings or rubber bands can be useful to attach parts together through this loops during the soldering or gluing process. The loops can be removed after by cutting them off, or they can be retained and used for the mounting of the satellite inside the sphere.

One half of the sphere can be assembled with one polar and three side parts. Two of this half parts then can be easily put together. These two parts seem to have a good grip on each other. Grip is good enough for the purpose of the proof of concept, though for a later designs, some better attachment mechanism would be desirable.

Nozzle platform consists of the central part, three stands and three nozzles. Central part acts both as a nozzle and a connector for the three stands. These three stands, each, house one nozzle on them. Assembly can be seen in the gallery images. Central part and the stands, currently, do not have any attachment mechanism. They can be glued or soldered together. As seen in the images, nozzles were also glued to the stands. Their positioning needs to be very accurate and small manufacturing errors have added up enough to make nozzles original positions inadequate, and glue helped to tune up this errors. The whole platform was additionally glued down to the metal piece for added stability.

To connect the nozzles with the compressed air source there was a need to make a distributor. This distributor has one incoming hose of 6x9mm diameters and four outgoing 4x8mm diameter hoses. The hose distributor had some air leaks after the assembly, so it was additionally glued. Option is also to buy a ready made hose distributors, though they usually give only two or three outputs, which means it might require few of them to get enough of outlets. Incoming hose has been attached as well to the hose connector as seen in the gallery. Finally, the outlet hoses were pushed in the nozzles inputs. Nozzle input diameters are slightly smaller than the hose outer diameters and they stuck in firmly.

Assembly of the parts felt quite intuitive and simple. However, hose system needed additional gluing as it was not air tight. Sphere parts fits naturally to their positions, however, a significant work is needed to smooth out all the edges and remove the air gaps between the parts. Eliminating all of the air gaps was not successful in the end and this lead, as well, to the sphere being somewhat elongated. It seems possible to improve the assembly process to make the sphere better, but it still requires good effort. Platform was assembled easily, but the parts, do have a bit of wiggle room after assembly, which introduces a bit of errors.

All of this lead to a final test bed not behaving as imagined. The imperfectly assembled sphere and slight errors in the nozzle positioning effect to fictitious contacts.

Another noticed issue is that the hose distribution system provides equal outlet pressures to all of the nozzles, while the central nozzle should have higher then the other nozzles.

The most important next step is finding a way to make a sphere that will be easily assembled with the correct shape, to minimize introduction of errors.

The platform could also get more supporting structures to minimize errors. However, a different solution might be designed, after seeing the pressure distribution problem.

Even though the project did not result in a successful proof of concept, some lessons were learned in the process. A number of improvement ideas exist and the project awaits for the future updates.