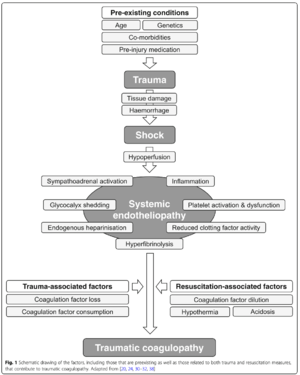 Hemorrhage is the leading cause of preventable death after trauma, in itself the cause of up to 40% of deaths in traumatically injured patients.[1][2] According to the Center for Disease Control and Prevention (CDC), 62% of people who died from injuries and 75% from gunshot wounds perished outside a hospital.[3] Steward et al. found that 53% of deaths attributed to trauma occurred in the first 12 hours and, of these, 37% were caused by hemorrhage.[4] It only takes minutes for a patient to bleed to death.  Decisions on hemorrhage control must be made within seconds.

In HICs, first-responders (paramedics, police officers, firefighters) are trained in hemorrhage control  techniques[5] [6] but this is not the current reality in Guatemala, which lacks a formalized EMS system.  Emergency prehospital care for the entire country of Guatemala is provided by three separate  firefighting companies. In total, these three companies are made up of about 8500 firefighters, at  least half of whom are volunteers. The firefighters of Guatemala attend to every type of emergency,  from childbirth to shootings to natural disasters. The medical training to attend these emergencies is basic, with only one of the three companies providing the option of a formal EMT course which is  not mandated. Furthermore, many traumas occur in rural areas where there are no trauma centers, blood banking capability is scarce, and hospital transport times vary dramatically and can be extensive. Guatemala has no centralized blood bank system to provide transfusion therapy to patients in need. There are only 3 public blood banks in Guatemala City, which has a population of more than 3 million people.[7] This accentuates the importance of managing hemorrhage in trauma patients.

Why is this important?[edit | edit source]

Providing early,[22] effective[23] triage and control of external bleeding increases the chances of survival of victims – which shows the need for well-trained first responders. Because of the survival benefit, prehospital providers should be prepared to address urgent situations.

In the military, protocols to deal with trauma and hemorrhage in extreme conditions are well established, with the use of evidence-based protocols. Military experience and research show that the leading cause of preventable death for penetrating trauma victims is bleeding. The Tactical Combat Casualty Care (TCCC) program has significantly reduced the number of preventable deaths, by recommending early use of tourniquets and pressure dressings to control bleeding.[24]

The Hartford Consensus took place in the US in 2015, because of an increasing number of active shootings since 2012, which caused a rise in trauma and hemorrhage in the country. The directive wanted to include recommendations for national preparedness, planning, prevention, and protection of communities. This committee was led by the American College of Surgeons, using supporting evidence from the U.S. Department of Homeland Security, the Federal Emergency Management Agency, and the U.S. Fire Administration.[25]

This consensus highlighted the importance of the incorporation of tourniquets and hemostatic agents as a part of bleeding control by first responders and general population, as well as guidance of pearls and pitfalls of tourniquet application. You can find more information about the tourniquet use recommendations here.

Threat is an acronym created at the event with the steps to achieve hemorrhage control. They are:

RE - Rapid Extrication to safety

A - Assessment by medical providers

This acronym supports the evidence that bleeding control is very important in patients with active bleeding, and should be done even before the assessment by medical providers, since it has been demonstrated to have a profound increase in survival rates in patients with severe trauma. All medical and non-medical personnel were advised to the competent in tourniquet use to stop the bleeding.[25]

How do people die from bleeding?[edit | edit source]

These patients develop multiple organ failure and experience death more frequently than patients with other diseases with similar injury pattern in the absence of coagulopathy.

Early acute coagulopathy associated with traumatic injury has recently been defined as a multi-factor condition, by the combination of shock caused by bleeding, upregulation of thrombomodulin related to tissue damage, generation of thrombin-thrombomodulin complex, and activation of anticoagulation and fibrinolytic pathways.[26]

It is not known the exact amount of time it takes for a human to exsanguinate, but there are some factors associated with it, such as type of injury, location and whether it is an arterial hemorrhage.

The severity of clotting disorders is affected by the environment and treatment leads to acidemia, hypothermia, dilution, hypoperfusion, and coagulation factor consumption. In addition, coagulation dysfunction is affected by trauma-related factors (such as brain injury) and individual patient-related factors (including age, genetic background, comorbidities, inflammation, and medications taken before the injury, especially oral anticoagulants and prehospital infusions.[26] 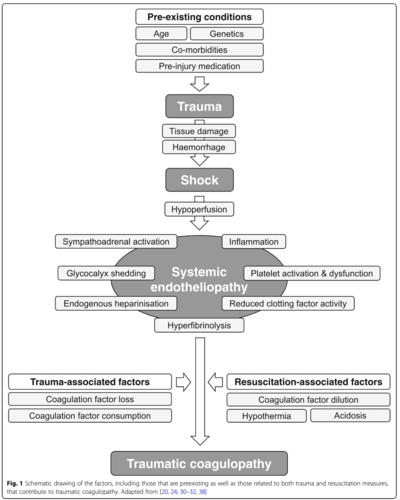 There can also be differences in the source of bleeding. When one can see it outside the body, it is considered external, and this is the subject of our study with the simulator. However, someone can bleed internally after a trauma, which is usually not visible, but can be as or more threatening to life, for example, if there is a complication called compartment syndrome. The major source of internal bleeding is the spleen.

The patient can present pale, with cold skin, dizziness, difficulty breathing (tachypnea), difficulty speaking (diaphoretic), sticky skin, thirsty, yawning. The pulse can either be very fast or on the other hand, weak and difficult to palpate. The patient might show one or many signs, and you always have to suspect internal or external bleeding in traumatic injuries.

ATLS, or the Advanced Trauma Life Support protocol, is a methodology for recognizing, triaging, and managing life-threatening traumatic injuries.  It was developed by trauma care providers at the American College of Surgeons Committee on Trauma and has been implemented at many sites around the world.[28]

One of the core components of this systematic approach to the traumatically injured patient is the assessment and control of life-threatening problems with circulation. In a trauma patient, this generally means bleeding. After quickly assessing the patient's airway and breathing, practitioners are encouraged to assess the patient's circulation by obtaining vital signs, if possible, and also assessing if there are major sources of bleeding.

While patients can bleed from anywhere they are injured, there are a few primary locations where blood loss can be a life-threatening problem. These locations are - the chest, inside the abdomen, in the pelvis or retroperitoneum, and notably for our training module, into the femurs/thighs or outside the body.  While pressure, packing, tourniquets, and foleys may not be very useful for bleeding that is happening inside the chest, abdomen, or pelvis, they can certainly help stop or temporize bleeding that is happening from extremities or joints that can lead to life-threatening bleeding outside the body or into the femurs.  As you recall from the previous section about the anatomy of blood vessels, there are very large and important blood vessels in the neck, arms, groins, and legs that, if injured, can cause a lot of blood loss very quickly. The techniques you will learn in this module can help you prevent morbidity and mortality from injuries in these types of places.

Menu
CrashSavers topics (Category)
Page data
Retrieved from "https://www.appropedia.org/w/index.php?title=Crash_Savers_Trauma/Bleeding_and_Hemorrhage&oldid=641231"
Cookies help us deliver our services. By using our services, you agree to our use of cookies.
Categories:
Comments
Privacy policy · About Appropedia · Disclaimers · Mobile view · Content is available under CC-BY-SA-4.0 unless otherwise noted.
</html