Though geese were a common sight on many Ozark farms of the past, they were not used for food as much as for their feathers. It was for those Ozarkians of German descent to appreciate and include goose on their tables. Ella Hough said her mother, Louise Schneider, felt she had not adequately celebrated a holiday or birthday in their home if goose wasn't the main dish. To keep a steady supply she raised geese every spring. In late fall she would pen them up to fatten on grain so that the first would be ready to dress out by the eleventh of November, Ella's father's birthday. When the weather got cold enough, her mother would dress out half a dozen or more geese to hang in the smoke house. Frozen they would keep for Thanksgiving, Christmas and other special occasions. 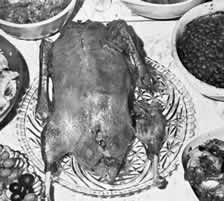 She prepared the meat in several ways. Sometimes she would slice the breast and fry it like Canadian bacon, boiling the bony parts for soup.

"The liver is nice. Nothing is as nice as goose liver fried in butter," Ella said. But the most common way of preparing was baking.

And baking a goose is what Pearl Thelma Massey wanted to do for the big Christmas dinner she always has at her house for her husband's family. Using her nephew's farm raised goose, and following Ella's directions for dressing and baking, she added her own years of experience in cooking fowls to serve her Christmas Goose.

Any age goose can be used for food, but the best for baking are those less than a year old.

Chop off the head in one clean stroke with an ax. (see photo #1.)

Do not let the bird flop around afterwards or the meat will get bruised.

Hold the goose tightly for a few minutes until it stops struggling, then hold it by the legs with the neck down to let it bleed.

Since the feathers on a goose are very thick and full of oil that makes them cling together, it is helpful to soak the bird in cold water before scalding. Soaking helps saturate the feathers. In more recent times some people soak the goose in water sudsy with detergent. The modern detergent cuts the oil better and allows the water to penetrate to the skin. (see photo #3.)

1. Cut off head with quick sure stroke.

2. Pearl Thelma Massey picks the soft down before scalding.

4. Scald in lots of steaming water.

After cold water has penetrated to the skin, then dip the goose in scalding water, briefly, but adequately, so that the hot water can loosen the feathers from the skin. Dip in neck first, then feet first to be sure all parts are scalded. (see photo #4.)

Then wrap the bird immediately in a large bath towel or a sack heavy enough to hold in all the steam. Let it steam for fifteen to twenty minutes. (see photo #5.)

Remove the covering and pick off all the feathers. This is the hardest part of dressing a goose, but is important for a beautiful finished dish for the table. (see photo #6.)

When all feathers are removed, singe the bird to remove the hairs. A crumpled up piece of newspaper set on fire is adequate. Run all sides of the bird quickly through the flame. (see photo #7.)

From here on the goose is prepared as any other fowl. To cut off the feet, bend them down and with a sharp knife cut through the skin and membranes at the joints. Discard the feet. (see photo #8. )

Wash the skin thoroughly with clean cold water to remove any feathers, soot from singeing and other dirt. The skin should be soft and oily and a slightly yellowish white.

Now you are ready to remove the insides, or draw the goose. Pull back the skin on the throat, reach in and pull out the craw or crop. Be careful not to squeeze it. Cut the esophagus leading to the intestines. Discard the craw.

Now go to the other end of the goose. Cut off the oil sack on top of the tail. Holding the tail up, cut a horizontal line just under the tail about two to three inches long. Be careful to cut close to the tail and not puncture the end of the intestinal tract. (see photo #9.) Cut another line parallel to that one under the anus, again watching not to cut through the tract. Then cut around the opening of the anus. Some people find scissors are very helpful in making these cuts. This will give you a square opening large enough to insert your hand. Reach in carefully and pull out the insides. Everything should come out together, as you have cut the connection at the neck when you took out the craw. (see photo #10.) Remove all without piercing the intestines and lay this aside for a bit. You may have to reach in again to remove the liver, heart, and lungs (often called lights). Be sure everything in the cavity is removed.

Wash the bird carefully inside and out.

Now remove from the intestinal mass the heart, liver and gizzard. Cut the arteries from the heart and squeeze out any blood. Wash and put it in a pan of water. Cut the gall (a long greenish gland) off of the liver. Be careful not to cut into it for the gall will spread greenish fluid over the liver. Next separate the gizzard from the intestines. Hold it in your left hand so that one of the openings to the intestines is up and the other opening, about one-third around the gizzard, is facing you. You will notice between the openings there is fatty tissue covering a sort of rounded muscular tissue. With a knife cut straight in between the two openings (go short way, not the long way around) cutting carefully through the gizzard muscle and through the first layer of membrane on the inside cavity. (see photo # 12.) Do not puncture the covering of the inside sack which holds the almost digested food. If you cut carefully, you can then with the fingers and thumbs of both hands, gently pull the gizzard apart the rest of the way, freeing the inside sack without breaking it. Discard the inside sack, and finish cutting open the gizzard so it will lie flat. Trim off any extraneous membranes and wash well.

Put liver and gizzard in the pan of water with the heart (these are the giblets) and discard the rest of the insides.

Cook the giblets until tender in salted water using a low heat. Save the broth for the dressing. Cut the giblets into small pieces and put aside for the gravy.Dressing

Ella's mother used apple dressing to stuff the goose fcr she thought the apples blended best with the flavor of goose. Ella said her dressing was like regular dressing with apples diced in it. Following her advice, this is how Pearl Thelma made her dressing.

Crumble or dice the bread. Mix in apples, celery and onions and seasonings. Add eggs, melted butter and broth or boiling water until you get a soupy consistency. Stuff this into the cavity of the goose and fasten the hole closed with clamps or sew with heavy cord. Put the excess dressing in flat pans and bake one hour at 350°F until tender. This will make about two pans of extra dressing.

As you work with the goose meat you will notice how much fat there is in it before cooking. For that reason it is helpful to place the bird on a rack in the roasting pan so that as it bakes and the fat cooks out, you can dip it out. Because the meat is so moist there is no need to baste. Bake in a covered pan at 375°F until tender. Ella covers hers with aluminum foil today. Goose takes longer to bake than turkey. A ten pound young goose might take about three hours. The cooking time depends on the size and age of the bird. When tender remove the cover, turn the heat up to 400° and brown. The main difference in baking goose and other fowl is the excessive amount of fat which should be dipped out as it accumulates.

The fat from the goose is a beautiful translucent pale yellow color. An average sized goose may yield as much as a pint. Render as you would Lard. Let the settlings go to the bottom and chill. The fat is fine for cooking, making cakes and other foods needing a rich fat.

After the goose is done, remove it from the pan. Pour out the fat leaving about 6 tablespoons (depending on the amount of gravy needed). Mix about 3 tablespoons of cornstarch in small amount of water and beat until smooth. Add to fat and mix well. Add water gradually stirring until smooth (in proportions of 1 cup to 1 tablespoon of cornstarch) and season to taste.. Add diced giblets and stir gravy constantly until thick. Be sure to stir in all the browned drippings from the bottom of the pan for flavor. Six tablespoons of flour can be substituted for the cornstarch, but it gives the gravy a milky color. If preferred, the gravy can be made with milk. This recipe makes about 3 cups. 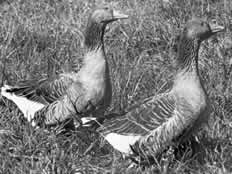 Geese pair off in the spring. Because the baby goslings grow very fast, they are awkward and prone to predators and mishaps like getting tangled in weeds. In flocks they are often noisy. Especially when disturbed, one will warn the others. Ella said their geese were also useful in cleaning the moss and lilies out of the pond. "You'd see them standing on their heads in the water with only their feet sticking up where they'd dive down to pull out the weeds.