From Appropedia
WE'LL KILL THE OLD RED ROOSTER WHEN SHE COMES

The old American folk song, "She'll be comin' 'round the mountain when she comes," tells of someone coming to visit. If it were company comin' 'round an Ozark mountain, they could be sure someone would kill the old red rooster when they come, since nobody could visit an Ozark farm without staying for dinner, Even before the company reached the door the woman of the house would probably send a son or daughter out to catch a nice fat chicken from the flock, and she would have it ready for dinner. Company got the best when they got chicken, a fresh, favorite main dish on old-time Ozark farms.

The woman of the house, like Freeda, usually took care of everything from messy beginning to delicious end when it came to dressing a chicken. Deciding which chicken she'd catch depended on what she wanted for dinner. If she wanted tender meat suitable for frying, she'd choose a young pullet or cockerel about three months old and about three pounds. If she chose an older bird, she'd probably fix chicken and noodles or dumplings or chicken soup. Since boiling would make an older bird's meat more tender. 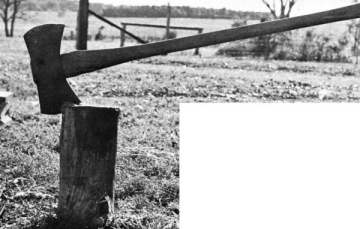 This time the Jefferys wanted a fryer. Catching a chicken with a leg hook, James Jeffery killed it, helping Freeda with the plucking and singeing till she took over with her part, cutting, drawing and frying it for dinner. Wielding a sharp knife, she demonstrated one way to dress a chicken--the way her mother taught her. 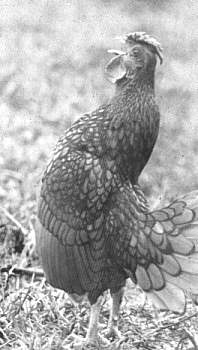 There are several ways to go about killing a chicken. Perhaps the quickest way is to chop its head off with an ax. Some people break the neck by grabbing it near its head and wringing or flipping the chicken's body around with a hard jerk. Another way to break the neck is to lay the chicken's head on the ground. Placing a bar or pole over its neck, step on the pole and pull up quickly on the chicken's feet at the same time. Once the neck is broken, cut off the head and hold the bird upside down until all the blood drains out. Some people hold on to the bird until it quits moving, since allowing it to flop on the ground bruises the meat.

The next step is to pluck the feathers. First scald the bird to loosen the feathers. [photo 1] To do this, fill a bucket with scalding water, and holding on to its feet, dip the chicken head first for fifteen seconds. Then dip the chicken feet first holding on to its wings for fifteen seconds, swishing it around to enable the water to reach the skin. Test to see if feathers come out easily. If they don't, dip once more, but don't leave the chicken in the hot water too long or the skin will come off when you pluck the feathers. [photo 2] Pick off all feathers. Now singe the bird by setting a crumpled piece of paper on fire and briefly running the chicken's body through the flames. [photo 3]' This removes the hairs and tiny feathers.

To remove the feet, bend at the joint and cut through skin and ligaments. [photo 4] Discard the feet. Some cut off the feet before singeing but leaving them on helps have something to hold to.

Now you are ready to cut up the bird. Using a sharp knife, start with the wings. Holding a wing out away from the body, slice the skin underneath the wing to expose joint that connects wing to body. Cut between the bones at this joint to remove wing. Remove the small projection on forepart of wing. [photo 5] Fold the wing into a triangle for ease in cooking.[photo 6]

The procedure is similar for cutting off the leg which is made up of the drumstick and thigh. Hold leg away from the body and slice skin between leg and breast to expose the joint connecting leg to body. [photo 7] Bend leg back to break the joint. [photo 8] Cut between bones and on through to remove the leg.

To separate the thigh from the drumstick bend the leg almost double and feel for the joint at the fat end of the drumstick with your thumb. Cut between the bones at this joint and set pieces aside. [photo 9]

Now you have just the body and neck. The next step is to expose the entrails by separating the back of the body from the breast section. To do this you have to loosen the shoulder blades, the skin off the neck and the skin off the breast, for these hold the sections together. First, find the shoulder blades on the back of the chicken and cut just under-neath each one at a time. [photo 10] Next pull the skin from the base of the neck up and over the neck. This exposes the neck. [photo 11] You may have to cut the skin loose at the base of the neck to do this. Now pull the wad of skin back and cut loose from the breast by slicing through the skin where the pulley bone piece forms a V. This wad of skin contains the esophagus, which is connected to the intestines. It also contains the craw which is sometimes full, so be careful not to cut into it when you are cutting the wad of skin loose from the breast. It's full of undigested food and it's messy!

Now pull the back section away from the breast section by grabbing the neck in one hand and with the other hand, getting a hold on the breast where the shoulder blades join the pulley bone. [photo 12] Pull the two pieces apart until only the skin near the tail is holding them together. [photo 13]

Before completely separating the back from the breast section, pull all entrails away from breast and leave them clinging to the back. Near the tail cut through the skin that is holding the two parts together. [photo 14] Set aside the breast section.

The next step is to work with the back section which has the entrails clinging to it. Grab the wad of skin which you previously removed from the neck, and pull downward towards the tail. Keep pulling entrails away until the cavity is clean and entrails are attached just at the tail end of the chicken. Cut off tail and entrails at the same time, being careful not to pierce intestines. With this procedure the intestinal tract from the esophagus and craw to the anus is all removed in one section.

Now you're ready to cut the back section into the neck, ribs and back pieces. Cut the bloody end off the neck, then cut the neck off at its base. To separate the ribs from the back, cut just behind the last rib all the way down to the backbone on each side. Break the bone at this spot and cut in two. [photo 15]

Now take the breast section. Break off the shoulder blades and save if you wish. To remove pulley bone, turn breast section with the cavity side down, and feel for the end of the breast bone. Cut downward as far as the knife will easily go, then forward as far as you can. [photo 16] Break the pulley bone loose by pulling it away from the breast and gutting it off. If you wish you can fillet the breast. Crack the breast bone on one side by hitting it hard in the cavity with the dull end of the knife. Peel flesh from bone and discard bone. Cut the breast meat into two or three pieces depending on size of piece.

The gizzard is a larger, almost round, brown organ. [photo 18] Pull it out of the entrails until it is attached only by one cord, the esophagus. Cut the gizzard loose with a V-cut into the gizzard at the spot where the gizzard is attached to the esophagus. When you do this, you cut into a sac of rocks and undigested food. Cut through the gizzard down to the sac, but not into it. To do this hold the gizzard so that the two openings are facing you. Between the two openings is a fatty tissue. Cut straight between these opening down to the sac. Carefully peel the gizzard away from the sac. Discard the sac. [photo 19] This step is very difficult and takes a bit of practice. Freeda Jeffery said, "My mother could do it, but I never got the hang of it myself." 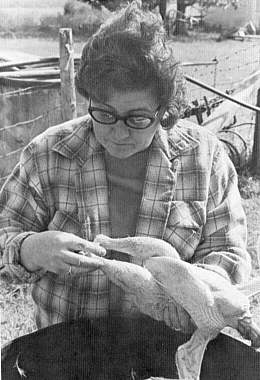 Freeda Jeffery prefers to pluck, dress and prepare her own chickens. 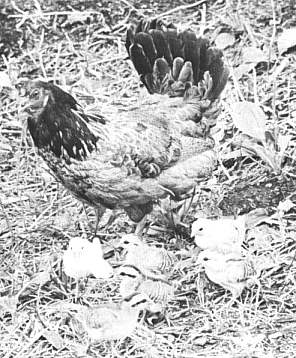 Rinse thoroughly all pieces. The chicken has been dressed and is now ready to be fixed for dinner. If you like you can try one of these old-time favorites, fried chicken or chicken and vegetable soup.

Melt fat in large skillet over low heat so that there is about 1/2 inch. Mix flour, salt and pepper. Dip each piece of chicken in flour mixture coating evenly. When fat is hot enough to spatter when adding drops of water, put in the cut-up pieces of chicken. Fry over low heat until browned on one side. Turn to brown on all sides evenly.

Bring water to boil in large pot. Add chicken pieces and boil for one minute. Turn down heat and simmer for 15 minutes, allowing the flavor from the bones to get into the broth. Take the meat out of the pot and remove the bones. Cut chicken into small chunks and put back into broth. Add diced celery, carrots, potatoes and seasonings. Simmer until vegetables are tender. Make a thick paste of soup broth and flour in a small pan. Gradually add 2 cups of broth to the paste and cook over low heat until mixture thickens. Add to soup and simmer 5 minutes.

respectful harvest of a chickenpodcast by Paul Wheaton and Jocelyn Campbell