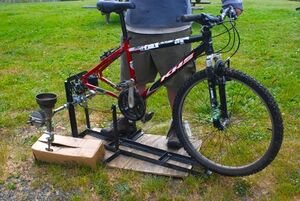 The standing state of the bike, leaning on the frame and locked into the axle/sprocket power drive system
Project data

Sure, you can harness energy and cruise around town on a bicycle, but have you ever wondered what else that energy could feed? A human on a bike can produce enough energy to power a laptop, needed lighting, or (with simple connections) a grain mill. While electronic devices require a wired design, a pedal-powered grain mill requires mechanical attachments. And in the spirit of localizing production for self-sustaining communities, the ability to mill grain on a small scale offers independence from corporate and urban production systems.

At the Cal Poly Humboldt Campus Center for Appropriate Technology (CCAT), a demonstration house for engineering work and appropriate design projects, there sits a hand-crank grain mill without an easy way to power it. According to the United States Department of Agriculture, fresh grains as part of the diet reduce the risk of several chronic diseases, including heart disease, and provide many vital nutrients. Not to mention that the need for a grain mill increased at CCAT once a local grain share started up in 2007. With the bags of fresh grain on hand, CCAT was ready for an easier milling process than the usual manual struggle. The design will ensure that one person can operate the bike/machine without needing assistance. Advice from local experts in bike mechanics and pedal power will be solicited. Since bikes are readily available used or from a scrap yard for refurbishing, and people in developing countries often utilize bikes for transportation, a mill design incorporating the bike without limiting the use of the bike will serve the widest population. There are millions of people who live day-to-day without reliable power to help complete daily work. Often, these people are living in situations where manual labor allows them to sustain themselves, but mechanical devices can offer one way to ease the work load. The International Labor Organization (ILO) reported that, "processed grain is one of the most important elements in the diet of low-income groups" in developing countries. The ILO found that appropriate technologies for grain milling keep the employment and the earnings local. Since one of the main reasons such technologies are not adopted is a lack of materials to build them, I have sought out a multi-use design. The completion of this project will see a system of gears and belts that attaches and detaches to the frame of a bike. The bike will work as a traditional transportation device, but also transform into a grain mill (or any other attachable mechanism that needs motion to work).

Useful, by both fulfilling the basic need for mechanical power and the basic need for transportation.
Comfortable, so that curious passersby with be enticed to try it out and so that client is happy to use it and impressed by the device.
Sturdy, so that it withstands energetic peddling, but is still transportable.
Simple in steps to set-up or maintain it, so that it remains useful over time.
Convertible between the mechanisms attachable and powered by the device, allowed based on adjustments in attachment styles.
Fixable, with parts than fit standard sizes and can be replaced by the communities using the device, as well as an instruction manual that advises on repair.
Adjustable, so that a variety of bikes may be attached to the system.
Compact in frame, so that the client doesn't lose floor space and others who later utilize the technology will find it easy to transport.
Accessible, with educational signage and labeling, so that people are intrigued by the device, able to make sense of the system, and walk away better grasping potential pedal power.
Re-used or recycled materials in the design, and the flexibility to work with re-used rather than exact fit-to-order. The parts and practices for production should not exceed basic community-level markets.
Local in the source of most if not all materials, so as to show how local, isolated communities can design such a device.
Affordable for the CCAT budget, but also keeping far below the prices on mail-order pedal power bikes: $500 or more.

Basic Pedal Power
The frame of a bike, a seat, handlebars, pedals, and some chains and belts are all it takes to make a pedal power unit, or 'dynapod.' Since the thigh, or quadricep, is the largest and most powerful muscle in the human body, it makes sense that bicycles remain one of the most efficient mechanical devices. With the body in a seat, the legs can provide pedal work. It is the sproket-and-chain mechanism and the ball bearings that trasmit power when pedaling (McCullagh).

Mechanical power At the average pedaling speed of an adult, about 70 rpm, around 75 watts can be produced for a short period of time. Professional cyclists have the capacity to generate as much as 1 horsepower. (Energy for Rural Development, National Academy of Sciences)

Key parts As Russavage outlines in his online 'How-To', the key parts for constructing a pedal-powered grain mill are few.(8) One may use an exercise bike with flywheel included and part of the machine built for you. Then, only an armature with bushing and driveshaft are needed for parts. To convert your own bike, you need:
a bike
a simple machine made up of belts and pullys, connecting to the mill
a second belt and pully a bike gear To take it a step more, I have included in the plans construction of a in-place exercise stand that will allow a bike to be converted between power source and transportation device. For this, one needs a welder and metal bars.(more to come)

Bicycle usefulness and demand
Advantages of pedal power agricultural tools include a saving in energy (since labor is less intense and distances are traveled on wheels), avoidance of soil compaction common with large-scale prodcution (McCullagh).

In developing nations, "bicycles are often utilitarian rather than recreational, providing essential transportation to work, school, and social services. Because new bicycles are relatively expensive – they are generally imported and heavily taxed, markets are small and inefficient, and average incomes are low – most poor people walk. Further, because scarce bikes are used productively and are relatively expensive, additional jobs are created repairing and maintaining them." (bikesfortheworld.org)

" The Food and Agriculture Organization of the United Nations (FAO) estimated that the high food prices of 2006 increased the food import bill of developing countries by 10 percent over 2005 levels. For 2007, the food import bill for these countries increased at a much higher rate, an estimated 25 percent." (Rosen) "For highly import-dependent or highly food-insecure countries, any decline in import capacity stemming from rising food prices can have challenging food security implications." (Rosen)

"Price increases for grains and oilseeds are of particular concern to low-income countries as these commodities constitute a large share of their citizens' diets. Low-cost grains historically have been a dietary staple in the poorest countries. In low-income Asian countries, grains account for an average of 63 percent of the diet; in North Africa,about 60 percent. In Sub-Saharan Africa, the region most vulnerable to food insecurity, grains account for nearly half of the calories consumed. The share of grains in the diet is lowest—about 43 percent—in lower income Latin America. In all regions, the situation varies by country. For example, in Bangladesh, the share is 80 percent, while in Eritrea and Ethiopia, both among the most food-insecure countries in the world, the share is around 70 percent." (Rosen) In addition, rising energy costs are squeezing the budgets of developing nations; this in turn has led to a renewed interest in local, natural energy sources such as mechanical power and biofuels. Thus, success may come in part from investing in agricultural technologies devised to work with low-income communities.

Versitility of the system
Pedal power has been applied to agricultural pumping, such as for hand pumps or salt-flat drying; to plowing and cultivating tools; to provide electricity by means of a generator-intertor-battery set-up; and to prepare food from dough kneeding to butter churning and to power grain mills.(McCullagh) In addition, the basic design for a pedal-powered grain mill can be manipulated with minor adjustments to power an array of mechanical devices around the kitchen and in the yard. (Energy for Rural Development, National Academy of Sciences)

Sizing the ideal system
Bicycles with larger diameter wheels create more mechanical advantage. Remember, Circumference =Pi x Diameter, and the bigger the bike wheels the easier the power generation. This is because the flywheel connected to the system will increase in efficiency the greater the difference in circumference from that of the bike wheel (Gerosa 1997). In other words, go for the small flywheel and big bike wheel combination.

The flywheel serves to smooth out pedaling when working against some probably jerky mill or resistive force. It in effect "varies the gear ratio twice during each revolution," increasing efficiency and ease (McCullagh).

I had to pay $70 for a welder at a local machine shop, Davis Machine, to do some welding work for the main frame. I also had to pay an unexpected $18.00 for the metal shop to cut my angle iron...I tried with a hacksaw, but it just broke a blade and I went for the heavy machinery. It definitely requires a short time with access to a machine shop to do this project right, but that hopefully exists for those needing this peddle power. |} Media:Eliz77 pedalMill Budget.xls

2/27 Do a second sweep for local reused supplies, take inventory to CCAT
2/29 Meet with Bart or an expert to have him critique the design; Get the literature review caught-up/completed
3/03 Meet with Client at CCAT to go over spendings, and finalize budget
3/12 Have bike gear attachment construction underway for milling
3/14 Have welded frame built by this date, finish bike gear attachment
3/28 Have system connected; begin testing system; Get any Appropedia material up-to-date
4/04 Focus on any weaknesses or repairs needed and fix 'em; write-up a manual
4/08 Complete rough draft of report to have reviewed early; finalize Appropedia site report

First, you gather the materials. This can take a long time, between working to track down where pillow blocks and sprockets come from and arranging for a reliable welder to do the initial framework. Basically, scrounge the local scrap yard, and try to find a dump with old go-karts or bikes. Then, give in and get the compatible but not yet found parts at the local hardware shop. I found the axle (steel rod), bike sprocket for the power chain drive, and some small pillow blocks at the scrap yard. They said they get angle iron from time to time, but this season I didn't have such luck. I bought the angle iron and the welding service for $50. Please see the price table for more pricing information.

When getting your frame together, try to use whatever recycled materials that are structurally sturdy that you can find. But if you want to follow my basic design, here are the measurements of angle iron steel I had cut for the frame: (all 1.25 x 1.25 x 1/8 inch) Mainframe, floor: 2 40-inch lengths 1 7.5 inch length 1 5 inch length 2 4.75-inch length to support the mainframe mainframe, axle arms 2 18-inch lengths 2 7.5 lengths and the pillow block holes at adjustable heights.

Below, I have included a gallery of the stages and key pieces to the project.

Page data
Retrieved from "https://www.appropedia.org/w/index.php?title=CCAT_pedal_powered_grain_mill&oldid=642351"
Cookies help us deliver our services. By using our services, you agree to our use of cookies.
Categories:
Maintenance categories:
About Appropedia · Policies · Contact · Content is available under CC-BY-SA-4.0 unless otherwise noted.