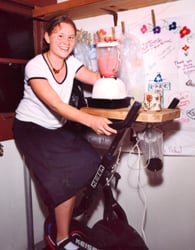 CCAT co-director Krystal Rogers demonstrates how to make a "smoothie" at a CCAT staff party while getting in some exercise at the same time.
Project data

The mission of the Campus Center for Appropriate Technology (CCAT) at Cal Poly Humboldt (HSU) is to promote the use of appropriate technology through demonstration and education. A popular element of these demonstrations is the decades old use of human and pedal power to complete everyday tasks, such as clothes washing or watching TV. The CCAT Pedal Powered Blender was first designed and built by Bart Orlando with the help of HSU student Saremy Graves in 1997. Since then, it has been a favorite feature of many campus and community events. It has even been featured front and center on the cover of the San Francisco Chronicle. The blender was built by modifying an old exercise bike; the flywheel of the bike turns a skateboard wheel, which is attached to a driveshaft connected to the blender. The Pedal Powered Blender is used to demonstrate the energy needed to power a blender while getting exercise and making a refreshing drink or smoothie.

Designed and Built for CCAT by Bart Orlando

The Pedal Powered Blender received a makeover in 2004, when it was updated with a new larger crank wheel, a new mounting plate, handlebars, and a new paint job. Since then, the bike has seen an additional six years of frequent use, and it is time for another overhaul. Robert Camacho and Eric Recchia will complete the overhaul for their Engineering 305 class project. One of the pillow block bearings will need to be replaced, and several proposed upgrades include a new paint job and blender mounting board and fixture.