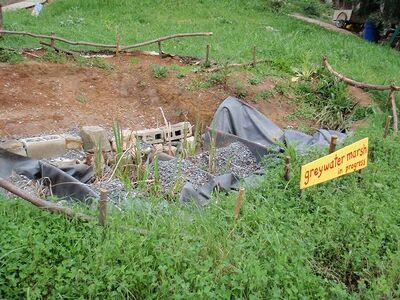 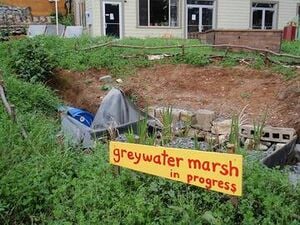 Welcome to the CCAT Greywater Marsh Project Continued! This page will record the efforts made by Linsey Payne and Tyler Ebright during the Spring 2009 semester at HSU to research, complete, and provide an end-use for the treated greywater at CCAT. 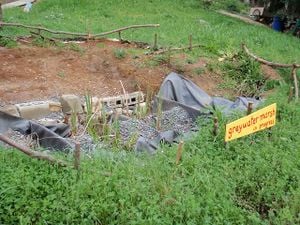 The Campus Center for Appropriate Technology (CCAT)'s greywater marsh we inherited has been an on-going project since 2007 when it was relocated to its current location. It is a subsurface marsh off the southwest corner of the house. The greywater comes from the sinks, the shower, and the laundry machine inside the house. The original design had a settling tank first with a sock filter and a siphon system. The siphon was to draw water up out of the tank through the piping over to the second tank, which was about 15 feet away to the south located directly adjacent to the subsurface rock marsh. This second tank was to act as a surge tank. Please see the CCAT greywater marsh (2008) webpage to get the full description of the work that was done as of June of 2008. The current wetland portion of the marsh was left incomplete in anticipation of an end-use for the treated greywater. The surge and settling tanks were also left in need of final adjustments and appurtenances, such as a filter, secure lids, and the completion of the siphon system. Options for the use of the treated water include, gravity fed irrigation or pumping the filtered water into the rainwater catchment system tank for use on all CCAT landscapes and/or for greenhouse irrigation.

The vision for this project was to confidently present a fully functioning, low-maintenance graywater treatment and irrigation system by the end of the semester in June 2009. The area around the marsh was to be terraced and landscaped with native or naturalized non-invasive vegetation. The water entering the system from the house would be filtered as it entered into the initial surge tank and then flow into a settling tank before entering into the rock marsh. Once in the marsh, the water would flow over two baffles and under three to increase greywater-to-oxygen contact. The greywater would then be released into a third tank where the water could be tested and then released into the gravity fed irrigation system. In case of any overflow during the rainy season, the treated and filtered water would flow down into the storm drain at the base of the driveway, which runs along the west side of the CCAT property.

Note: Collecting this data with a daily water-use log would have been more accurate and would be recommended for future greywater projects. 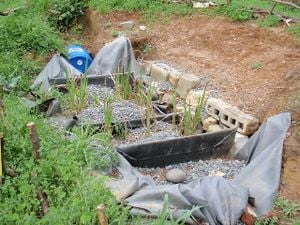 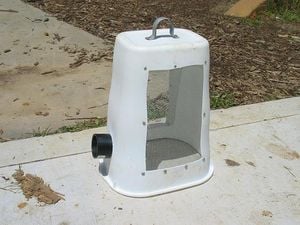 Fig 6a: Mesh and plastic filter

The gravel was removed from the end of the marsh behind the last baffle and dirt was excavated directly behind the end of the marsh to a depth of approximately 4 feet. Any water in the marsh was removed using a 1 1/2" Bilge Hand Pump and a bucket (see Figure 7d). The beginning of the irrigation trench was also excavated. Tank #3 was then placed in the hole. This tank was placed vertically with its base approximately level with the bottom of the marsh. The marsh and the barrel were connected through piping a few inches above their bases using a bulk head union. The gravel was replaced between the last baffle and Tank #3. The gravel throughout the marsh was redistributed evenly.

The Surge Tank (aka Tank #1) was initially designed as the settling, filtration, and FOG catching tank. The plan was to have a sock filter attached to the initial greywater outlet from the house and a siphon system to draw water from the barrel and over to Tank #2. The issue with a sock filter is that it requires frequent maintenance and often needs to be replaced. The Oasis Graywater Design Manual states that the "drum with pump and mesh filter [bag] is pretty much a discredited technology at this point due to longevity problems." We have changed the purpose of Tank #1 to be a surge tank with a metal mesh filter to catch large debris. This required that the barrel be raised approximately three feet to bring the bottom of the barrel just a few inches below the inlet and outlet pipes. This will provide at least two feet of surge capacity and will encourage water to flow rapidly through the piping over to Tank #2.

The settling tank (aka Tank #2) was initially designed as the surge tank. Hinges were added to the maintenance opening and the existing duct tape was removed. A larger maintenance opening was added, also with hinges and a latch. This tank mimics a restaurant grease trap with an aluminum baffle trapping the FOG on the water surface, while letting the underlying water flow underneath this baffle, free of FOG, out and into the marsh. This baffle will also slow down the water and allow sediment to settle at the bottom of the tank. The outlet pipe from Tank #2 was attached to the pond liner using a bulk head union (see fig. 9b).

Initially improvements were focused on the end-use portion of the marsh system. This required the addition of a water testing site (aka Tank #3) for the cleaned water exiting the marsh. This water will then exit the tank and continue on through an irrigation system to water landscaping plants in the southwest corner of the CCAT property. A blue 55-gallon barrel was donated by CCAT for use as Tank #3. The water testing tank has several functions. The primary function is an access point to the water once it has been cleansed by the biological and physical processes occurring in the marsh for water quality testing. Additional functions are to allow adjustments to be made to the height of the water in the marsh using piping and to be a connection and access point for the beginning of the irrigation system.

Each tank would have some standing water and needed protection from mosquitoes. We gathered some fiberglass mesh, 16 gage wire, and a two inch spring to create protective barriers around the tank openings.

The gravity-fed irrigation system was built to provide water for several alkaline-tolerant plants at the southwest corner of the CCAT property. The irrigation begins at the marsh outlet water testing barrel (aka Tank #3) and flows through ABS piping in a branching pattern at various depths underneath the soil. The depths range from 6" to 4'-0" underneath the surface of the soil. In this system there are 5 outlet points with water being released through holes that were drilled into the last 2' of each pipe branch. These perforated pipes were surrounded by gravel and held in place by heavy rocks or bricks. Dirt was then replaced over the top of the pipes and compacted by walking. 2" to 6" rocks were placed over the branches and main stem of the system to indicate for future users where the pipes are located and as an art piece. The main stem of the system continually slopes gradually downward, while the branches have either a neutral or negative slope.

Drought tolerant California native plants were used to landscape the area between the rock wall on the east side of the marsh. These plants will only be receiving rain water after establishment (2 years). Prior to establishment, these plants will need to be watered weekly the first year and monthly the second year. Water loving, alkaline tolerant plants were used to landscape the area receiving the treated gray water. These included small trees, shrubs, and ground covers. Our focus was to use plants that provided food, such as berry bushes or orchard trees. The plants used were: (1) Apple tree, (1) Currant: Ribes speciosum (3) Monkey flowers: Mimulus aurantiacus, (4) Evergreen huckleberries: Vaccinium ovatum, (4) Toyon: Heteromeles arbutifolia, and (2) Coffeeberry: Rhamnus californica. The coffeeberry shrub starts were too small to plant right away and are maturing in their pots as of May 2009. Two rose bushes were already planted on-site and will remain in place.

The completed marsh system is a success, but is not perfect. We provided an end-use for the treated water, vegetated the terrace on the east side of the marsh, connected and sealed each component of the system to one another, and provided the ability of the marsh owners to adjust the level of the marsh water as needed. The system has been simplified from the original version, by the removal of the burlap filter and the siphoning system in the original settling tank. Many of the remaining imperfections are due to the original constraints of the system such as the location of the system, the height of the greywater outlet from the house, a concrete driveway cutting across the connection point between the surge tank and the rest of the system, and the "Y" connection with the overflow valve into the sewer being horizontal instead of vertical. The location and the low elevation of the initial outlet severely restricted the use of the final cleansed water, because most of landscaped portion of the property was located on the eastern side of the house or was above the level of the marsh. The "Y" connection of the sewer and greywater pipes right before the connection with the greywater system hinders the success of the system, because this is the only location for sewer overflow before backing up into the house. This "Y" had been laid horizontally instead of vertically with the sewer connection on top and means that with both valves open the water will split between the two pipes and reduce the efficiency and effectiveness of the greywater system. It also means that if the sewer valve is shut to make sure all greywater leaving the house enters the treatment system and anything goes wrong to clog the surge tank or settling tank, then the water will overflow the surge tank or back up into the house. It is unlikely that the filter in the surge tank will clog, because it is large and not completely sealed. However, if the filter is left for more than a few months without cleaning the danger of clogging has the potential to increase significantly. This will need to be observed by the CCAT co-directors.