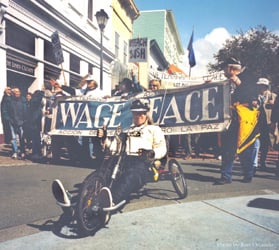 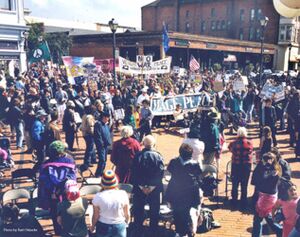 Brian Willson led a march against the start of the Iraq War in 2003 as it arrived at a protest rally in Eureka, California. The PA system for the event (attended by 4,000 people) was powered by the CCAT pedal powered concert generator. Brian, a veteran of the U.S. war against Vietnam and member of Veterans For Peace, is shown hand-pedaling his custom built trike. It was designed with hand cranks instead of foot pedals.

Brian lost both his legs just below the knee during a protest in which he and many others were attempting to halt a munitions train carrying weapons to the Contra (death squads) in Central America. While Brian and two others were peacefully blocking the tracks, the train crew of the slowly approaching train suddenly sped up to three times the legal speed limit of 5mph. Brian was struck by the train before he could get out of the way!

While the pedal powered devices shown on these web pages do not speak to the needs of the alternately abled, those considering doing projects that involve human powered devices might give thought to designing them with an eye towards assistive technology. Brian's Handcycle was designed by Craig Colfer