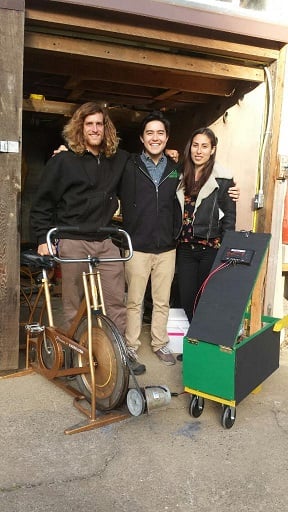 For the Spring 2015 Engineering 305 class at HSU, the bike powered tools team's goal is to make a bicycle powered system to provide an outlet primarily for the use of power tools in the Campus Center for Appropriate Technology (CCAT) tool shed. Currently, CCAT has to use a few extension cords that draw energy from the grid to run their power tools. The bicycle power system uses the energy provided by the rider to charge a battery to be used for power tools. Since a human can usually maintain around 100 Watts of power output for around an hour,[1] a battery is needed to be able to power tools such as a chop saw that needs between 1080-1200 W of power to run.[2] Ultimately, the stationary bike will turn a motor that will charge a battery that will have power tools plugged into an inverter. This bike powered tool station is an appropriate technology for generating electricity at CCAT. The project will help CCAT achieve net zero energy use by creating renewable energy on site for power tools.

This is an appropriate technology project for Engineering 305 in the Spring Semester 2015. The project's purpose is to design and build a bicycle powered electricity generator to be used for power tools and other appliances at the Campus Center for Appropriate Technology (CCAT) at Cal Poly Humboldt in Arcata, California. The project is set to be completed by May 2015. 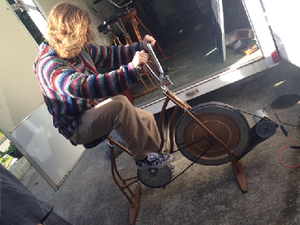 The objective of this project is to develop a way to power tools by using electricity that is generated by off-grid bicycle power. By using off-grid energy, this will be a sustainable way to generate electricity and help CCAT move towards reaching Net Zero.

The following criteria will be used to measure the success of this project. These criteria listed below have been chosen based on the collaboration of a CCAT representative and the students of Engineering 305 who are working on the bike powered tools project. The scale (1-10) represents the importance level of meeting the constraint of each listed criteria.

Below is research of the available literature that pertains to the CCAT bike powered tools project.

Appropriate technology (AT) focuses on the design and practical implementation of inexpensive appliances, technologies, and tools of everyday life.[3] It is most definitely a relevant and cost-effective movement.

According to an energy fact sheet,[4] AT can be summed up as:

In short, Appropedia defines Appropriate technology as technology that is designed to be "appropriate" to the context of its use.

AT is small when possible, requires fewer natural resources and produces less pollution in order to be sustainable.

There are many different kinds of renewable energies out there, among the most popular and well know are solar, wind, biomass, biogas, microhydro and nuclear energy. Yet human energy is overlooked. Human kinetic energy can be transfered in multiple ways, it can be used to pedal a bicycle to generate electricity.[5] According to AE News, "Some third world organizations are implementing human powered technologies to generate electricity to power computers and other appliances."[6] In developing countries, if human power was implemented where demands amounted to a average electrical power consumption below 20 Watts per capita it could impact human development directly.[7] Renweable energy is here to stay and it is important to know what energy source would be most appropriate for a location. For CCAT, it would be easy to implement bike powered tools and use human kinetic energy to make it all happen.

A Human Powered Energy Generator (HPEG) designed to work with bicycles has been able to produce a maximum current and voltage of 1.4 amps and 215 volts respectively. The HPEG system can also produce 300 W with a rotation speed of 790 rpm.[8]

Using human power to pedal a bike to generate power gives you the ability to never be powerless again. To produce electricity without fossil fuels is a great way to respond to climate change. "The generation of electricity produces the largest portion (40%) of U.S. carbon dioxide emissions."[13] There are two ways to reduce the amount of fossil fuels we use: (1) encouraging conservation and efficiency and (2) switching to cleaner and renewable energy sources."[13]

"The effect produced by moving charges give rise to what generally is called electricity."[14] Alternating Current (AC) electricity is the main form of electrical generation, transmission, and distribution. Usually generated at one voltage level, the AC voltage level can easily be changed using transformers.[17] "AC is produced by constantly changing the voltage from positive to negative to positive and so on."[14]AC power is used for running electric motors commonly found in household electronics. Along side AC current there is also DC current. "Direct current is a bit easier to understand than alternating current. Rather than oscillating back and forth, DC provides a constant voltage or current."[18] 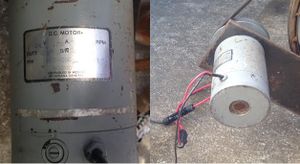 Battery University provides tutorials that evaluate the benefits and constraints of battery chemistries, give advise on choosing the best battery and recommends ways to extend battery life. At Battery University crucial battery knowledge is broken up into three parts to be easily studied. Part One: Basics You Should Know, focuses on addressing battery mechanics, chemistries, charging and discharging techniques. Part Two: The Battery and You, goes into detail about battery personalities and examines ways to get the most out of packs. Priming, storing and recycling is also looked at. Part Three: Batteries as Power Source, considers the battery in portable, stationary and electric powertrains applications. Lastly, there is an inspection on the kinetic power and expense of the battery in contrast to fossil fuel.

According to Power Generation Inc,[23] some easy ways to stay safe while working with electricity include:

According to NoOutage.com,[24] when working with batteries:

If the battery acid makes contacts with your skin or clothing, wash immediately with soap and water. If acid gets into your eye, immediately flush eye with running cold water for at least 10 minutes and get medical attention a.s.a.p.

Also, power inverters contain capacitors and when they are first connected to the DC supply they will draw a high current to charge the capacitors. Yet, this is normal and will usually end in a spark where the last connection is made. Therefore, NoOutage.com recommends that this last connection be made AWAY from the battery. The following sequence accomplishes this:

This sequence is NOT covered by inverter instruction manuals that NoOutage.com has checked to-date. NoOutage.com advises to be absolutely sure that you have properly identified the positive and negative terminals on the battery. Reversing polarities when connecting the cables may blow the inverter internal fuses and cause permanent damage!

This project will be assembled from mostly recycled parts and materials, most of which are already located at CCAT. However, other recycled supplies will be acquired at the following locations:

To achieve the goal of constructing a bike powered tools station at CCAT a timeline and budget were implemented to ensure the completion of all project activities and to stay within the budget range.

In order to complete CCAT's bike powered tools project a timeline was created to meet the deadline completion day of May 8th, 2015.

The costs from Table 1 are associated with the materials needed to complete the CCAT bike powered tools project. Some materials have already been provided through CCAT free of charge. All other materials will be bought locally and online. Materials will be purchased based on quality but also pricing, as mentioned in the criteria the budget has a constraint of being within the range of 600-700 dollars. As a highly weighed criteria for the project the proposed budget will aim to stay within the client's desired range.

The design of the CCAT bike powered tools project requires multiple components. The design was constructed on paper first and used as the project's blueprint.

The construction of CCAT's bike powered tools project began with constructing a housing unit for the battery, inverter, and charge controller using mostly recycled materials. The only purchased materials were hinges and wheels. The battery and inverter went inside the unit for protection. The charge controller was screwed down onto the lid for easy display.

To complete the CCAT bike powered tools project, wiring must be done to connect all electrical components.

1
Determine size of wire needed based on amperage going through the system.
2
Cut wires to desired length.
3
Strip around 1 cm of wire coating.
4
Place leads over exposed wire and securely crimp the lead to the wire.
5
Put wires from charge controller, battery, and inverter into an electrical nut, one for positive and one for negative
6
If wire is exposed, cover with electrical tape.
7
Attach wires to inverter.
8
Attach open wires to battery, negative first.

Before performing any maintenance

All Batteries should be checked at service intervals for:[26]

This section is a how to on maintaining CCAT's Bike Powered Tools station. 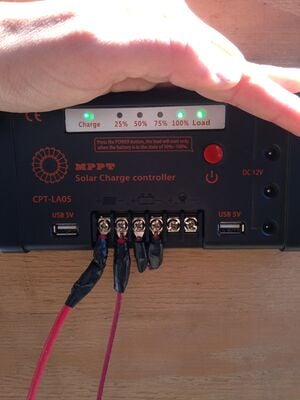 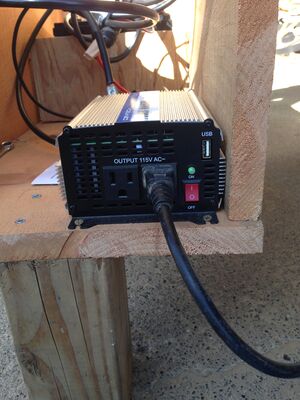 Caption
Plug desired power tool into the inverter (must be 9 amps or less).
3 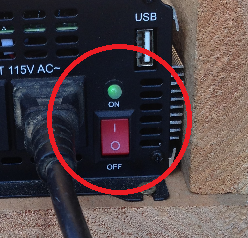 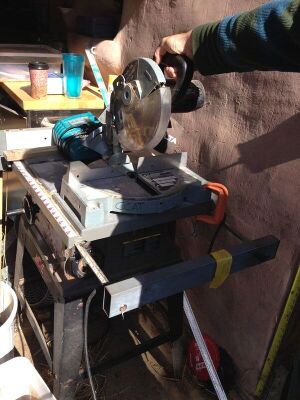 Caption
USE THAT TOOL! a. Inverter beeps? Turn tool off, it's using too much power. b. If 25% light is blinking, stop use and charge battery.
5

Caption
Once finished with step 4, turn off inverter and unplug desired power tool.
6 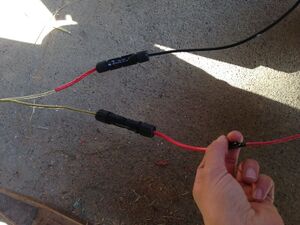 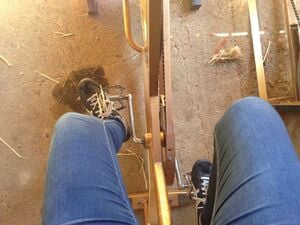 Caption
The battery is only being charged when the "Charge" light is lit on the charge controller, so make sure you're pedaling with enough power to turn that light on.
10

Caption
The 100% light MUST STAY ON for around 5-10 seconds after you stop pedaling before putting the system away to extend battery life.
11 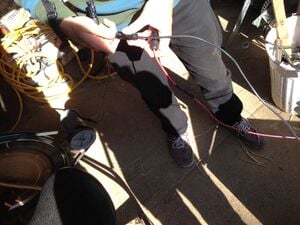 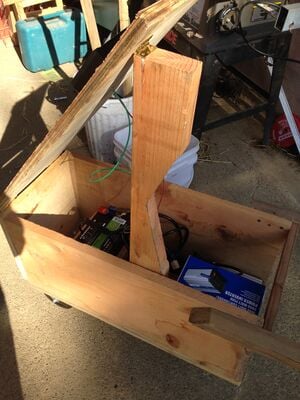 Caption
Put wires into wood housing unit and store in a safe location out of the rain. Enjoy!

Through the testing process, a few issues were discovered. The first is that our connections throughout our system are not very secured. We did not have any experience with soldering and did not have a soldering iron available so we connected most things with electrical tape and crimping. However, these connections are not very secure and thus, it was difficult to keep a steady flow to charge the battery. Second, the inverter tended to peak out if the circular saw was stuck in the wood while we were cutting. The circular saw can run constantly through small pieces of wood or if it is making clean cuts, however, when it is cutting through thick pieces and gets stuck it pulls too many amps and the inverter cuts out. So, a sharp blade is recommended and also, small chopping motions are recommended to prevent the blade from getting stuck in the wood and not cutting through it. Lastly, our charge controller is difficult to read and not accurate all of the time. The lights on the charge controller will read actual battery percentage once the saw is not running. While the saw is running, the charge controller may read 25%, but once the saw is switched off, the charge controller will read what the battery is actually at. This is true as well while charging the battery, the light may read 100% while pedaling, but once the pedaling has the stopped, the light may go down all the way to 50%. Thus, it is recommended that the system can be used until the 25% light is blinking and the system should not be put away until the 100% light is lit for at least 10 seconds after the pedaling has stopped.

This is only how to troubleshoot basic operation. For complex issues, contact Alex Takahashi.