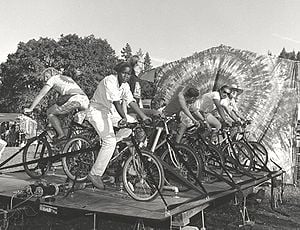 THE MULTIPLE BICYCLE POWERED GENERATOR. Designed and Built By Bart Orlando At CCAT. This generator preceded the Human Energy Converter and was used one time at the Hog Farm Pignic in 1994. It was built at CCAT. Nine bicycles were held in place with straps and braces made of plumbing pipe fixtures. Arlo Hagler provided help with the electrical wiring. The rear wheel of each bike rested upon a friction drive "wheel" made from a fence post peeler core which was drilled through its center and cut in half so that it could be clamped to one of the long drive shafts, each coupled to one of two permanent magnets, 1800 rpm 24v generators. The generators (shown in the lower left corner above) were wired in series to sum their voltages. The final output voltage was 18v making it compatible with charging 12v battery banks. Diodes, (one way turn styles for electricity) prevent the battery bank from driving each generator as a motor. With hindsight, it would be better to fabricate individual exercise bike stands, each fitted with its own generator. Better yet, an after market kit for retrofitting ones bike with an electric motor assist could double as a generator if a custom bike stand was deployed to raise the rear wheel of the bike off the ground. That way people could ride their electric bikes to an event and then park them near the stage where they could provide electrical power. Most of the energy used in conjunction with a concert event is consumed as the audience commutes there by car. Over 5,000 people attended pignic concerts at the Hog Farm each year it was held.