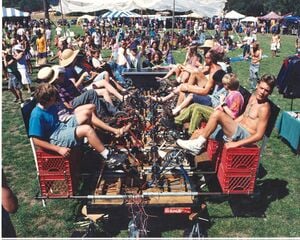 The Human Energy Converter (H.E.C.), a pedal powered electric generator that harnessed the pedaling effort of 14 people at one time. The H.E.C. was capable of sustaining a 1kw output at 24v. It was used at rock concerts to help power such musicians as Bob Weir, Richie Havens, Merle Saunders, Jon Lord, Big Brother and the Holding Company, John Trudell, Zero, Steve Kimock, Bonnie Raitt, Dr. Loco, Clan Dycan, Scott Huckelby, Julia Butterfly, and others. It was also used to power the 1995 Headwaters Forest protest/demonstration, as well as community events on the Arcata Plaza. It was featured at the Hog Farm Pignic and The Whole Earth Festival. The H.E.C. powered concerts, dances, anti Iraq War protest rallies and environmental protest rallies, HSU campus events, Renewable Energy Fairs, and events on the Arcata Plaza until 1996; when the (28) milk crate seats were confiscated by the Cal Poly Humboldt Campus Police Department. The criminal penalty for possession of a single crate included 6 months in prison and a $10,000 fine. This was avoided when we explained to the president of the company that owned the crates; Humboldt Creamery, that we had been granted permission to temporarily borrow the crates from the Arcata Food Coop's dairy department manager for use in an experiment to pedal power the electricity used by the P.A. system and mobile radio broadcast transmitter van used at the 1995 Grand Championship Kinetic Sculpture Race ... and possibly a few other events. All chargers were dropped after the crates were returned to the dairy department of the Arcata Coop (undamaged because of the special non-invasive clapping techniques used to harness the crates as seats to the adjustable seat support assembly ... an example of an anarchistic act of non-violent social responsibility and FUN of the "highest" order!)

Designed and Built by Bart Orlando,Todd King and Mark Mueller

(With Corrections In Red By Bart Orlando)

The Human Energy Converter has gone through at least three incarnations since its invention in the early nineties by our pedal power engineer, Bart Orlando, and Todd King, a former co-director of CCAT. The first design did not succeed, leading to our second effort, a flat bed trailer with bike gearing a pedals that powered two generators at the end of the trailer. We used an early type of invertor and powered lots of local concerts and rallies. Actually, there was only one H.E.C., the 14 seater, named by Todd King. It used a Dynamote - Brutus 24v 3000w inverter. The previous first attempt at a concert pedal powered generator was built by Bart on the grounds of CCAT in '93 and employed the rear wheels of bikes ridden to the Hog Farm Pignic, to drive friction wheels attached to ~ 14 ft long drive shafts directly coupled to permanent magnet generators. It produced 18v which is capable of powering 12v systems. The CCAT pedal powered generator exercise bikes used to power events was built by Bart Orlando with assistance of HSU engineering students. Each bike had its own generator, allowing pedalers to choose the pace of their workout. Here is a link to Bart's web pages describing the systems. colored text [1]

It's design can be seen below.

Unfortunately the seats on our design were made with milk crates that were borrowed from our local dairy--an employee had given us the OK, but a manager later demanded the crates back. Without seats, we decided to scrap this HEC and begin anew.

The HEC in its current incarnation is actually a series of "Pedal Power Generators" that is described at the bottom of this page. It is, in essence, a series of exercise bikes that are individually hooked up to small 12V generators that are about the size of a car alternator. They each put out about 50-100 Watts, depending on who's pedalling, and we connect them in series and in parallel to make a 24V charge. We have eight matching Schwinn bikes mounted to a flat bed or just lined up on a lawn, and people line up to pedal the power for the event! It's a great hit among all party-goers, usually affording a great view of the stage as well as fun for kids and the kid within the adults.

The electricity made by the bikes is run through a 4024 Trace inverter to make clean AC electricity appropriate for sound systems, but we have the option of feeding excess electricity into the "grid" or into batteries. We often also wire in solar panels to the HEC set-up to provide extra power, but that is not necessary. It's just nice to say we made more electricity than we used.