This page describes the process of building the roof rack to secure the solar panels on the Mobile Energy Operations on Wheels ( CCAT MEOW ) project. Project and write up by Scott and Yvonne, Spring of 2005 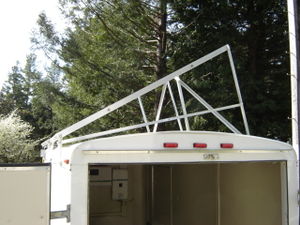 Our task was to design a newer, sturdier frame that could be easily raised up to a 30 degree angle and then lowered for storage/transportation. Since neither of us had barely any prior metal construction experience, we new this was not going to be a simple task.

We wanted the solar panels to sit above the roof since additional panels may be added to one side of the trailer in the future. However, the trailer has been plagued with leaks, so we decided not to mount the racks to the roof itself. Mounting to the roof, in a worst case scenario could create more leaks and in a best case scenario would create additional maintenance because someone would have to re-caulk the mounts occasionally to prevent leaks. We decided to attach aluminum supports to the side beams of the trailer and attach the rack to those supports.

Removing the interior wood panels was a painstaking process mainly due to the location of battery box and other components in the way but was necessary to find what we would be securing the outside supports to. It was determined that the interior frame supports were not structurally strong enough to support the intended weight, so we secured 2 new supports to the inside of the frame on each side for a total of four. After this was completed and the interior panels were replaced and the components re-secured to the wall, we were able to attach (6) six-inch angled aluminum supports to which we would attach the rack to.

The next part of the design, was of course the rack design. Before we could continue, we had to figure out what sort of raising/lowering mechanism that would support 300+ lbs and be easily accessed and operated.

Pros:Ease of design. Cons: Ease of use - it would require more than one person and they would have to be on ladders working simultaneously.

Pros: Ease of use. Cons: Mechanical difficulty with weight and design considerations. May be tough for one person to operate.

Pros: Ease of operation, weight considerations not a factor. Cons: Angle limited based on height and placement

After much consideration and several brainstorming sessions with engineering professors, solar-installers, students and others, we decided on the car jack system because of its ease of operation and simplified mechanics.

There are three main components of the rack: 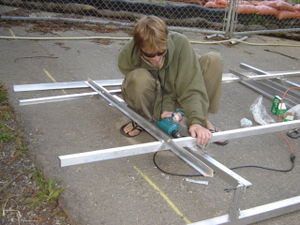 Scott working on the rack

We decided to construct the entire rack using the same angled aluminum that we used for the supports with an exception of one piece of square tubing that we salvaged from a local solar installer. The aluminum was 1 1/2" x 1 1/2" and was 3/8 inches thick.

One of the more challenging design issues was securing all the angled pieces to each other. In order to do this we need to drill many holes, and all bolts and nuts used needed to be weatherized with an anti-seizing agent. We also needed to make many difficult precise cuts of our own to get our desired lengths and sizes of pieces we wished to use. Safety goggles, gloves, and multiple securing clamps are definitely recommended for anyone attempting to cut lots of aluminum at home. More than one (minor) injury was incurred in this phase and demonstrates our true dedication to appropriate technology!

As we neared completion of the frame, we test-raised the frame and were excited to see it in action. We were also excited to reach our desired angle of 30 degrees. We were however, concerned with the slight wobble and tilt that was exhibited by the frame and thought that once the panels were attached, the weight would be distributed and the problem corrected.

After attaching the panels, the frame was ready to be raised for the final test before we attached the frame to the roof. As we began to raise the jack, it became painfully obvious that the lengthwise wobble had not gone away. To further complicate the matter, the aluminum was bowing under the weight in several places and we were now only to achieve a 20 degree angle

Unfortunately the aluminum was bowing in several places We were both obviously frustrated after all our hard work that the frame was not sturdy enough to support the panels. At the present time, we plan to reinforce the center cross beam that rests on the jack with a 1 1/2" square tube. We are also going to add a 2" x 3" square tube connecting the three cross-beams. Hopefully this should stop the bowing and the panels can be secured to the trailer in the coming weeks.

This rack is in good condition and currently in use as of May 2010!

Page data
Retrieved from "https://www.appropedia.org/w/index.php?title=CCAT_MEOW_rack&oldid=631726"
Cookies help us deliver our services. By using our services, you agree to our use of cookies.
Category:
Maintenance categories:
Comments
Privacy policy · About Appropedia · Disclaimers · Mobile view · Content is available under CC-BY-SA-4.0 unless otherwise noted.
</html