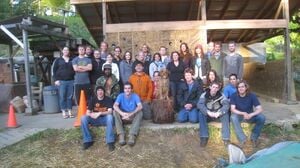 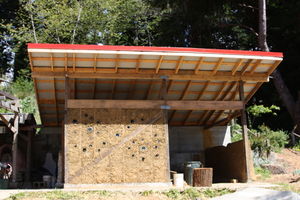 This page is devoted to documenting the process of building the west wall of CCAT's Greenshed using the natural building method called clay-straw slip. CCAT, or "Campus Center for Appropriate Technology" is a student run demonstration home at Humboldt State University which showcases the use of appropriate technologies in a residential setting. CCAT is located at the the south end of the Humboldt State University campus in Arcata, CA. Like many of the technologies featured at CCAT, our clay-straw slip wall was undertaken to fulfill the requirements of our Appropriate Technology class (Engineering 305).


Here's a link to an informational video about the construction of the frame for CCAT's Greenshed:
http://www.youtube.com/watch?v=Owdwpbwe6Xo

In researching alternative building methods for this project, we discovered that there are very many inexpensive, environmentally responsible, non-toxic alternatives to common modern building methods. We looked into sustainable building methods, such as wattle-and-daub, earthbag, rammed earth, adobe, cob and papercrete. We chose clay-straw slip after evaluating the pros and cons of each method. Some considerations that were taken into account were our climate, time constraints and availability of the materials needed.

These are the criteria we took into account when determining what building method to use:

This decision making method allowed us to integrate our criteria with the different building methods being considered. Scores were assigned to each building material, this gave us a basis on which to evaluate and choose a material to build with.

Some General Information About Natural Building Methods Considered:
Uses of Earth as a Building Material:
• formed into blocks
• packed between forms
• molded by hand


Wet Climates and Earth Building:
• mud mixes are often placed wet, directly by hand
• should be elevated off ground to avoid sitting in moisture


Cob:
• made of aggregate (various sizes of rock and sand) and straw bound together with clay
• roughly 3:1 ratio of sand:clay needed
• earth mixture strong against compressive forces, straw gives tensile strength
• soil must be tested for clay content
• small test mixes will be necessary
• construction simple, using few tools
• no framework needed
• hygroscopic, can take on and give off water vapor from air (regulates humidity in building and discourages mold growth)
• fireproof
• shelves can be built in
• labor intensive/time consuming
• can be poor insulator, depending on amount of straw used
• needs to dry for a while before being plastered


Rammed Earth:
• compressed soil, compacted into form
• soil mix is placed in layers about 1' thick
• plaster may be required depending on materials used


Earthbag:
bags filled with earth, stacked in layers, tamped down to lock into place. Barbed wire can be laid between layers for tensile strength.
• very earthquake resistant
• great for forming arches and domed structures


Cordwood:
• Cords bonded with mortar
• hygroscopic
• no plaster required
• wood can shrink or expand causing gaps and cracks
• wood can mold, rot, be destroyed by insects/animals


Straw Bale:
• stacked straw bales, covered with a plaster
• excellent insulator
• very vulnerable to water, must be lifted off ground in moist climates
• plastering can be difficult due to texture/non-uniformity of bales


• applied when wet using hawk and trowel
• can be made of earth, lime, cement
• clay used must be broken down and sifted finely
• lime gets soaked in water to become calcium hydroxide
• plaster must be tested
• the thicker the coat is applied, the more likely it is to crack while drying
• 2 or 3 coats is typical
• 1st coat makes uniform surface and is scratched so that the 2nd coat will adhere
• 2nd coat covers any cracks and smoothes rough spots

There was an existing frame built for the Greenshed by CCAT employees. There were three walls which needed to be filled in. The south wall chose to use cob and the north chose cordwood and mortar. Our west wall used clay-straw slip. Each of these materials were chosen for their abilities to either store or resist heat, as well as durability in our moist climate.

For our design, we consulted with CCAT as to what they would like the aesthetic properties of the wall to be. Because it faces out towards a pedestrian through-way, it will be seen by a high volume of people, therefore the wall must be aesthetically pleasing. CCAT also asked that the wall allow as much natural light into the work space as possible. Considering this need, we decided to incorporate recycled glass bottles into the wall's design.

The following is an AutoCAD sketch of our final bottle design:

Structure:
We started with a traditional stick frame wall. We then placed 2*6 studs 16 inches apart by drilling stabilizers into the cement to secure the studs in place. We also placed a crossbeam diagonally through the studs to provide greater structural support. Additionally, we screwed 1*1in. wooden keying to the interior of each stud. This keying acts as resistance to torque. The straw locks around the key and makes the infill less vulnerable to pressure on either side. We secured 2.5ft tall plywood lengths to either side of the wall with wood screws into the studs.These were the plywood froms which we stuffed our straw-clay slip into.

Materials:
We obtained 3 bales of straw from a local feed store and began with clay dug from the CCAT property. Both the west and south walls used the clay in building, which quickly depleted the resources we had to work with on site. Luckily, we were able to contact a local construction site which allowed us to use clay they had displaced and had no use for. We dug it into the back of a pickup truck and transported it back to the CCAT site in two trips.

Material Preparation:
We broke up the clay and mixed it with water in 5gal buckets. Originally we used a ratio of 4clay to 1water but this varies depending on how wet the clay is to begin with. We then strain the mixture through a ¼inch screen to remove any large particles that didn’t disassociated in the water (ex. Rocks, grass, dirt clods, organic matter). The ideal slurry mixture will be the consistency of a thick milkshake after straining. Then on a tarp we spread out approx. 2 5gal buckets worth of straw and applied the slurry mixture incrementally to the straw. We mixed the straw and clay with our hands until the straw was evenly coated, with no golden straw left showing. One can test to see if the straw is coated properly by squeezing it. If it drips water, the slurry is too wet. If it holds together without dripping, the mixture is ready to pack.

Building:
The next step in the process is filling in the plywood forms. Handfuls of clay-coated straw are pressed into the forms. Several times per lift the straw clay is tamped down using a heavy piece of wood, or compressed using hands. Tamping too much is not advised. If overtamped, it is possible the core of the wall will be impermeable to air flow and will not dry properly. If the wall is not tamped enough, the wall will not be structurally sound. A good way to test the wall’s strength is by pushing on it from either side. If there is movement, this means it was not tamped enough. Each lift is allowed to dry for a minimum of 24 hours within the form. The form is then removed and placed above the previous lift, with a few inches of overlap. The next lift is then ready to be packed. This process is repeated until the top of the wall is reached. In our case, we could no longer tamp from above due to the top beam of our frame being in the way. We instead only used one piece of plywood and packed the last lift from the side, securing the final piece of plywood at the end. Altogether it took 5 lifts to complete our wall. Upon completion, we noticed that the infill for the top lift was not stable enough in two sections (between studs). We removed these sections, which separated readily and re-packed with more tamping. Around our diagonal cross-beam we commonly found gaps between the straw and the beam. This was remedied by mixing a straw clay batch and patching the holes. The wet and dry clay adhered and a flush surface to the wall was achieved.

Making Bottle Bricks:
Bottle bricks were made by using a tile saw to cut bottles harvested from the waste stream. The tile saw was set to cut the bottom 3inches of the bottle off. We butted the bottom parts of two bottles together and wrapped them in aluminum flashing and duct tape. The flashing acts as a reflector, sending light through the bottle and into the shed. Without the flashing, much light would be lost to the interior of the wall.
The finished product is a ~6 inch long bottle brick. We often used the butt of a clear bottle on the interior of the wall and a colored bottle on the exterior. This method allowed for brighter light to enter the shed.

Placing Bottle Bricks:
We bored holes out of our straw-clay infill using a toothed cylindrical drill attachment (~4in. radius). Our bottle bricks were coated in a clay slurry to allow them to adhere to the inside of the wall. Any spaces between the bricks and wall were filled in with chopped straw-clay slip leftover from boring the holes out.

Plastering: We have yet to complete the plastering of our wall. We plan to use the same lime plaster recipe as was used by previous ENGR305 students on their demonstration wall project last year. This recipe has proved durable in this climate over the past year.

Our testing consisted of building several 2x2ft test frames out of 2x6's. We tested three different mixtures. They were straw and clay, wooden planar shavings and clay and mixture of all three. We attached plywood to either side of the test frames to create an infill space.

After filling the forms and waiting approximately two days we removed the plywood. We gave the test walls about a week of drying time.

Findings:
Planar Shavings and Clay:
We found this mixture to be ineffective at keeping its shape. It never dried properly and came apart easily when disturbed.

Planar Shavings, Straw and Clay:
We found the mixture of all three to be more structurally sound, however it also dried very slowly.

Straw and Clay:
The most stable of all of our test walls turned out to be our simple straw clay mixture. It dried the quickest and held its shape under several different stress tests. Based on these findings we decided to go ahead with the straw-clay slip.

The plastering on our wall has yet to be completed. This plaster will act as a sacrificial layer to the elements.The sun, wind and rain will slowly eat away at the lime plaster.We have yet to see the rate at which the plaster will degrade. We are estimating the plaster will need to reapplied approximately every two years.