How to make homemade ecobricks 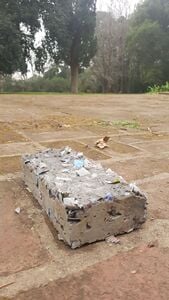 This page explains how to produce homemade bricks from a mixture of cement and plastic.

I made this project in order to recycle my plastic trash myself. Although I try to reduce my consumption of plastic more and more, something always remains. With this technique, I can transform that little bit into bricks and when I have many I will make something useful with them.

Making bricks is an excellent solution to the problem of excess plastic, because unlike other forms of recycling, it allows you to recycle huge amounts of plastic, of any kind, without laborious prior separation and without turning it back into garbage for decades, even centuries. . 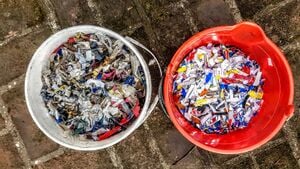 I mainly use semi-rigid plastic (bottles, trays, etc) cut by hand with scissors. I tried a blender but it didn't work. Perhaps with a processor it will work, I did not try. At first I also cut supermarket bags, but if the scissors are not very sharp they are very laborious and add very little volume, so I stopped doing it. In addition, supermarket bags (in Buenos Aires at least) can be put into so-called "love bottles" that are then recycled to produce plastic wood, a solution in many ways very similar to eco-bricks. 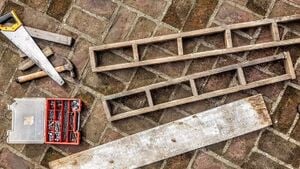 I made my own molds with some old wood and nails.

That is to say the classic mixture of cement, sand and water, for which you also need a bucket and a shovel or something similar to mix.

Mix three parts sand, one part cement, and one part water in a bucket. Stir until desired consistency.

The amount of concrete to prepare will depend on the amount of bricks we want to produce and plastic we want to recycle. As an example, with 1500 ml of sand, 500 ml of cement and 500 ml of water (plus plastic) three bricks are produced.
two
add the plastic

It is important to prepare the concrete before adding the plastic or else integrating everything becomes much more work. It can be mixed with a garden shovel or mason's spoon. In the video I do it by hand but then someone told me that cement can be toxic, so I recommend wearing gloves, especially if you are going to do a lot of bricks or very often.

Add two parts of plastic for each part of cement. Continuing with the previous example, to 1500 ml of sand, 500 ml of cement and 500 ml of water, you would have to add 1000 ml of plastic.

The exact proportion of plastic is delicate. Too much plastic makes for ugly, brittle bricks, while too little is inefficient, as the point is to recycle as much plastic as possible. After several tests, I came to the conclusion that approximately two parts of plastic for each part of cement works well. However, the amount of plastic that enters the pot that we use for measurement depends on the pressure that we exert. The ideal would be to weigh the plastic to give an exact proportion, but I haven't done that experiment yet.
3
go to the mold
Transfer the mixture to the mold and press well to fill the molds as well as possible. Again, by hand it is much easier. I recommend wearing gloves.
4
Let dry
It is important that it dries in the shade because if we leave it in the sun, the bricks can break.

The steps above are the result of several tests and failed attempts. In this section I describe some of these tests and the lessons learned.

For this project I was inspired by an investigation by CONICET (National Council for Scientific and Technical Research of Argentina) where they produced much more sophisticated eco-bricks. The CONICET bricks have several points in their favor:

CONICET released the details of the investigation so that municipalities and entrepreneurs could replicate the technique and market it. Thus, in 2017 the municipality of Junín de Mendoza already recycled more than 60% of its plastic using this technique (today probably more). Another adopter in Córdoba uses them to build social housing and even won an innovation award from Google .

However when I wanted to download the research to adapt it for my own purposes, it was no longer available. I wrote to them but they didn't respond so I had to start from scratch.

page date
Retrieved from "https://www.appropedia.org/w/index.php?title=Cómo_hacer_ecoladrillos_caseros/en&oldid=659421"
Cookies help us deliver our services. By using our services, you agree to our use of cookies.
Category:
About Appropedia · Policies · Contact · Content is available under CC-BY-SA-4.0 unless otherwise noted.