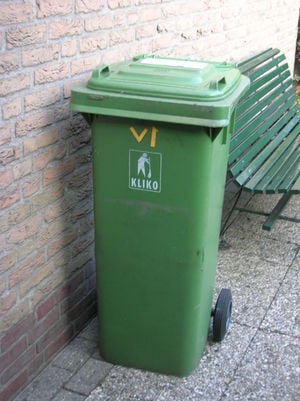 A container for collecting the biodegradable waste of a household

The main environmental threat from biodegradable waste is the production of methane in landfills. Methane is 21 times as potent a greenhouse gas as carbon dioxide and accounted for some 3% of total greenhouse gas emissions in the EU-15 in 1995. The Landfill Directive 1999/31/EC obliges Member States to reduce the amount of biodegradable waste that they landfill to 35% of 1995 levels by 2016, which will significantly reduce the problem.[3]l

Biodegradable waste can often be used for composting which turns the waste into humus. It can also be used as a resource for heat, electricity and fuel in future, by using anaerobic digestion[4] as it is being achieved by the swiss Kompogas treatment for 20 years now. This produces additional Biogas and still delivers usable nutrients that can be implemented to the soil.[5] Especially animal-based kitchen scraps (such as leftover fish, meat), ... are best disposed this way (as these are best not composted). Finally note that leftover human food (vegetables, ... -no animal flesh-) can also be used as fodder to flightless birds, goats, pigs, sheep, ... or alternatively can be fed to birds, and other wildlife.

In the USA, approximately 50% of waste sent to landfills or incinerators is biodegradable; therefore, composting could create many new jobs, and recover significant resources that are being lost.[6]