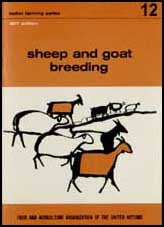 Reproductive system of the she- goat and ewe[edit | edit source]

The reproductive organs are all inside the she- goat or ewe.

All you can see from the outside is the entry to the system which is called the vulva.

Genital organs of she- goat

Genital organs removed from she- goat

Flowers have ovaries which contain ovules (see Booklet No. 3, pace 11).

The female sheep or goat has two ovaries. Every 21 days they produce an ovum. (In speaking of animals we say ovum, plural ova.) If, at this moment, the ewe is served by the ram, and the she- goat by the buck, the ovum is fertilized. It develops and becomes a young one.

Reproductive system of the buck and ram[edit | edit source]

This system consists of:

Stamens give the pollen that fertilizes the ovule in a flower (see Booklet No. 3, page 10).

Testicles give the semen that fertilizes the ovum.

The fertilized ovum becomes a young one.

When the female carries a young one in her womb, we say she is pregnant.

Pregnancy begins with fertilization and ends with the birth of the young animal. It takes about 5 months.

The young animals that are born are called the litter.

If the she- goat or ewe has had one litter in the year, she should not have another litter before the following year.

The she- goat or ewe cannot both feed the young one(s) in her womb and suckle those already born.

The female which is going to give birth stays in one corner; the udder swells and hardens.

At the birth, part of the membranes which cover the young one(s) comes out; the water in these membranes should flow out.

Next you see the legs of the young animal coming out, either the two forelegs or the two hind legs.

After the young animal has come out, if it is still joined to the mother by the umbilical cord, cut the cord and tie knots at both ends.

Then make sure you clean it well.

After the birth the rest of the membranes come out.

They must all come out. Otherwise they may rot inside the womb and cause the mother to die.

Usually the birth takes place without difficulty; there is nothing for the farmer to do, except in the case of a female which is giving birth for the first time.

In this case he can help her by pulling downward on the legs of the young one.

When the young animals are born the mother rubs them with her tongue; she licks them.

You must let her do this.

At this time the mother is often thirsty, so give her water to drink.

Take great care of the new- born animals. They are very delicate. They easily catch diseases and parasites.

To protect them, have them vaccinated.

Take good care of the young animals and house them well. Otherwise they may die, and you may lose a lot of money,

A female should have a litter every year.

After birth the mother suckles her offspring for about 4 months. But from the third week the lamb or kid can take other food besides the mother's milk.

At 6 months the lambs or kids no longer suck and they are said to be weaned. If the mother still has milk, she is milked. After 1 or 2 months have her served by a male.

The mother may refuse her young. This often happens when the mother gives birth for the first time, or when she has two young ones. In that case put the mother and young ones together in a stall to get them used to each other.

If the mother is dead, suckle the young one with the milk of another female, or give pure cow's milk in a feeding- bottle. Give 5 to 7 feeds a day in small amounts.

If there are 20 females in a flock there should be 20 litters a year.

If there are only 10 litters a year, the flock is not producing enough.

A farmer will not earn enough money with such a flock.

A female which produces no offspring during the year should be sold or eaten.

If a female has no young 5 months after being served by the male, she is said to be sterile.

Give her plenty to eat for 4 or 5 months to fatten; then you can sell her for a good price.

The females must be served 5 months before the beginning of the rainy season. Then there will be plenty of grass at the time of birth. The mothers will have plenty of milk and their young ones will be well fed.

A male should not serve his daughter; the offspring will be malformed.

A flock of 30 to 40 ewes or she- goats needs 2 rams or bucks. The flock needs good breeding animals.

The other males of the flock are castrated.

Where goats are concerned, the bucks are sold or eaten while they are young and before they can reproduce themselves so there is no need to castrate them.

How to castrate the males

The animal husbandry service has special instruments for this, and the livestock assistants are used to them.

If the males are not properly castrated. their wounds will not heal up well and they may die.

At what age should the males be castrated?

The males which are not wanted for breeding should be castrated at the age of 2 months, at least.

Castrate old rams and old bucks, because then they fatten more quickly, the meat has less taste, and you can sell them better and faster.