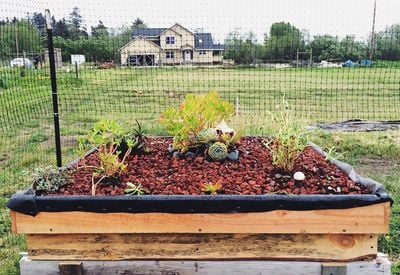 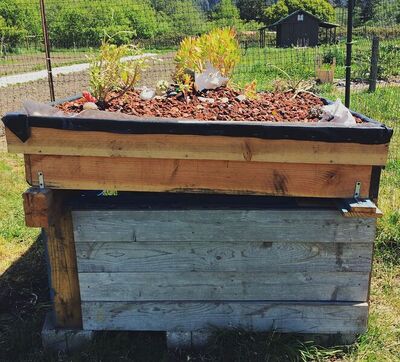 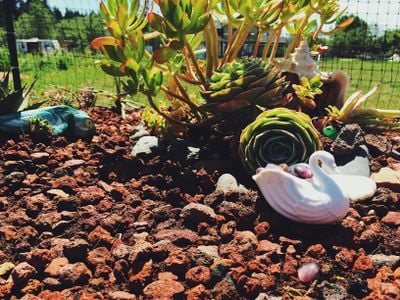 Humboldt State University Engineering 305 class volunteered to construct a living roof for Bayside Park Farm a community farm in Arcata, California. The roof was designed to be placed on top of an animal hutch that the farm was currently in the process of building. The type of living roof is considered to be a form of an extensive living roof, due to the fact that it allows for low maintenance and ease of construction. Currently, the living roof seems to be serving its purpose as a roof for the animal hutch.

Bayside Park Farm located in Arcata California in Northern California in the United States and also goes by the name Arcata Educational Farm. It is a Community Supported Agriculture (CSA) facility that also acts as an educational farm. The Engineering 305 class during the North American Spring 2015 semester will be constructing a functioning living roof. This living roof must attend to the owner's specifications regarding its dimensions and purpose, which are that the living roof be made on a small animal hutch that is currently being made. The construction and development of the living roof will span from January 2015 until May 2015.

The objective of this project is to create a functional, sustainable and sufficient living roof at Bayside Park Farm. A living roof also known as garden roof or green roof, is a roof that provides protection to the roof base and helps reduce water runoff and allows for some temperature regulation inside the housing unit. Furthermore it can be used for improving air and water quality, promoting energy conservation, providing food, and creating an ecosystem within an urban area. If possible we plan on using affordable or recycled materials that may be donated for the roofs construction and by doing so we will cut costs down for the construction of the roof. By doing this we aim to create a feeling of community involvement and create another area of the farm that may teach the community about an alternative to roofing.

The original suggested project was to build a living roof over a cob oven that would be rebuilt. However, at the request of the farm our project was changed to building a roof for a future animal hutch that the farm was wanting to build.

The criteria was defined according to the farms purposes and preferences, which were very loose and only asked that the roof serve as an educational tool that could be used over time. This criteria was used as a guide for the construction of the roof. Where values were higher is where the most effort was placed in providing those demands in the construction of the project. The scale (1-10) represents the importance level of the constraint of each listed criteria.

The construction of the roof took a combined total of four days with the effort of two people at a time.

The living roof was designed based off the information given by the farm that the hutch being built would be a 4.5ft by 4.5ft structure. We were not told anything else about the hutch being built other than its proposed size. Because of the size of the roof it seemed practical to give the roof no more than a two degree slope to prevent soil erosion and allow water to drain naturally. Because we knew nothing of what the structure would look like we assumed an overhang of about three inches. The roof was asked to be built as low maintenance as possible therefore a simple one inch open was allotted for the back of the roof to allow water to flow backward naturally. 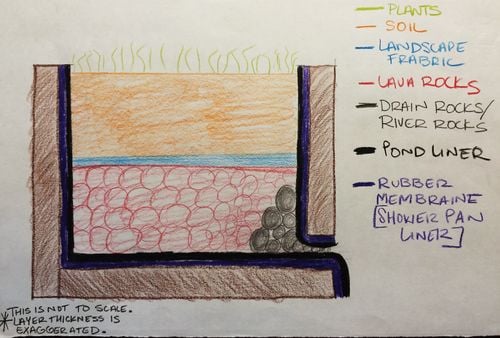 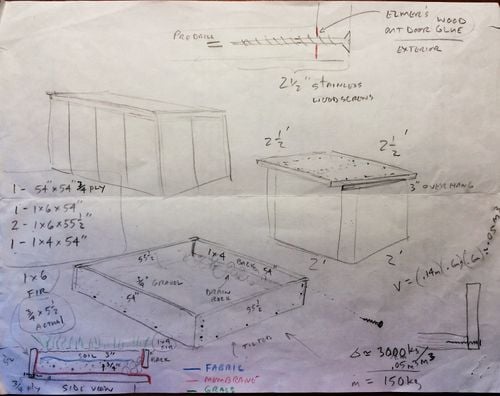 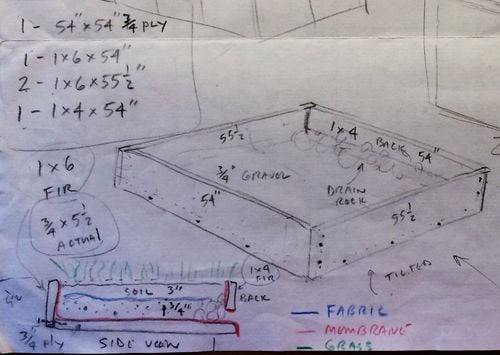 This is the budget for the roof. Almost all of the items were donated.

The roof was designed specifically for low maintenance therefore the farm will have to do some weeding and if required some watering. However, side paneling was placed on the structure and that was not accounted for in the roof over hang calculations. This means that when the roof drains water the back paneling is getting wet because the structure is now extended out an extra three inches. Making sure that back paneling wood does not rot or mold is pertinent to the health of the system.

For the functional longevity of the roof the farm should do minor maintenance as suggested.

Testing involved checking on the roof once a week to make sure the structure was still standing and that the plants were still alive. Testing also involved watering to check for any potential leakage. During the construction of the layers of the roof we had tested to make sure the slope tested on paper was actually appropriate for the roof. This testing consisted of us pouring water at the head of the roof once the first two layers (the membrane and pond liner) and drainage rocks were placed. This allowed us to see that gravity was working for us and that the slope was enough to allow for drainage. We did this same test after each subsequent layer to again make sure the theoretical slope would pan out with each layer.

The actual test was trying to simulate rain fall. This was done by trying to fill the roof with about 12 gallons of water. This proved very arduous and somewhat difficult. However, we were able to exam how the drainage worked and we were able to check the consistency of the water leaving the roof. We discovered that the roof does a very good job of draining the water and retaining some water. We also discovered that there does not seem to be any nutrient loss from the soil, but that because the lava rocks are red (full of iron, magnesium, and potassium) the waters discoloration seems to only be coming from that. Here is what those results looked like.

The maintenance of the roof and durability of the roof seem to be withstanding. The succulents planted have started to take over meaning that thus far the soil depth seems to be permit-able for the succulents. There is a possibility that we could maybe try to go deeper with the soil there is some room currently to add just a few inches of more soil. Regarding the usage of lava rocks. There was some concern that the heavy metals from the igneous rock has the potential to seep into the soil maybe altering the nutrient level for the plants. With this testing result however, it seems that the water is leaching those metals out of the roof. This seems to be good news for the plants, but regarding the water run-off this could pose a potential problem to the grass or plants around the structure. This is actually one of the concerns brought up in peer-reviewed articles regarding living roofs and the amount of metal leaching from living roof structures. Testing of the surrounding plants and grasses of living roofs could be a next step.

Adding more soil or rather having the soil flow over would maybe make the roof more aesthetically pleasing and allow for more root depth. We were lucky enough to use untreated milled wood for the roof base which is a lot easier to work with than particle board or pallets.

The roof has placed side paneling that was not accounted for during the construction of the roof. We were not aware that this would be something that the farm would be doing. What this means is that the farm will have to make sure during the raining season that the back panel wood does not rot or collect mold because it is now getting wet by the water drainage. The farm will have to make sure that the roots being set by the succulents are deeo enough to withhold the strong winds during the spring season. The farm should maintain the plants and grasses surrounding the roof according to the amount of metals being released by the roof run off.

We do not for see any major problems. However, for minor issues we suggest:

The layers of the living roof have remained unchanged. Water still drains through the rocks and they have had no problems with leaks or problems with plants. Overall the living roof has been used to grow succulents for bouquets and presentation. The only problems that the farm has experienced are with the hutch's kittens which have dug up plants and dug up soil and lava rocks. To combat the problem the farm has put produce crates over the plants to protect them from cats. They have offhandedly mentioned that they might put a fence around the roof if the problem continues, but hope that the cats will stop interfering with the roof before any further modifications to the project are needed. 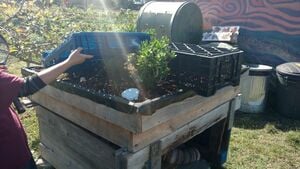 The produce crates on the living roof being taken off

Introduce team and semester in the following format: