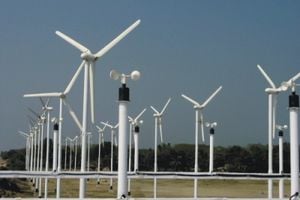 Wind energy or wind power is being used in Bangladesh to combat the country's dependence on Natural Gas.[1] Grameen Shakti[1] plans to make renovations for the wind powered plants on the coastal areas of Bangladesh. Bangladesh's Local Government Engineering Department established that the annual wind speed in the coastal belt ranges from 2.96 meters per second to 4.54 meters per second.[2]

With 90 percent of Bangladesh's electricity produced by natural gas, an alternative energy like wind power is being considered. Wind energy is cleaner and cheaper to maintain and does not create as much pollution as natural gas. Bangladesh has a 724 kilometer long coastline and also has many small islands that are capable of collecting strong winds provided by it's northeast region and winter month breezes.[3]

While it's still in the experimental phase, a wind monitoring system has been set up on the island of St. Martin, which is off the coast of Bangladesh. Wind data for one year was stored in a data logger where its characteristics were under observation.[4]

In 2006, the Bangladesh Power Development Board started a wind power project in Kutubdia, an island off the coast of Bangladesh. The wind power provides power for 12,000 residents.[5]

In 2005, under the supervision of the Bangladesh Power Development Board (PDB, four three-bladed windmills were installed[6] 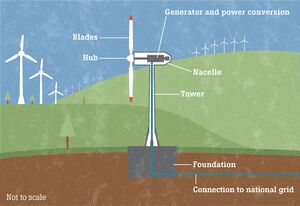 Wind turbines supply electricity to national grids. They must produce enough electricity at the right voltage and frequency to power cities or towns. Smaller wind turbines can be used without grid systems and instead use rechargeable batteries that regulate wind supply to match electricity demands. At standard wind speeds, the output of an electricity-generating wind turbine is produced in watts.[8]

The nacelle sits on top of the tower and contains main technical parts of the wind turbine.Usually made of fiberglass, the nacelle contains the low- and high-speed shafts, the gearbox, the brake and the generator. It also contains the blade pitch control, a hydraulic system that controls the angle of the blades, and the yaw drive, which controls the position of the turbine relative to the wind.

The word nacelle is derived from the Old French nacele, which means a small boat or dinghy, which was in turn derived from the Latin navicella. The term is commonly used in aviation design to refer to a covered housing that holds engines.[10]

The Renewable Energy Information Network (REIN) of Bangladesh approved this project to be run under the Bangladesh Power Development Board (BPDB). In addition Bangladesh Banking Company Grameen Shakti[2] has experimented with coastal wind turbines and installed four hybrid wind power stations, which are a combination of wind turbine and diesel generators.[11]

Sustainable energy in Bangladesh is mostly monitored by REIN, which also has programs for solar energy, biomass energy, and micro-hydro energy.[12][13]

Page data
Retrieved from "https://www.appropedia.org/w/index.php?title=Bangladesh_Wind_Power&oldid=650692"
Cookies help us deliver our services. By using our services, you agree to our use of cookies.
Categories:
About Appropedia · Policies · Contact · Content is available under CC-BY-SA-4.0 unless otherwise noted.