Back Yard and Commercial Rabbit Production/13

From Appropedia
< Back Yard and Commercial Rabbit Production

Rabbit manure has a high nitrogen content when the rabbits are fed a well-balanced diet. It will not burn plants and is easy to incorporate in the soil. It is satisfactory as fertilizer on gardens and when placed at the bases of flowering plants, shrubbery, and trees. There is no danger in using it for fertilizing soil on which crops are to be raised for feeding rabbits if mixed well in the soil or covered.

The value of rabbit manure depends on how it is cared for and used. There will be less loss of fertilizing elements if the material is immediately incorporated into the soil. When manure is stored in piles and exposed to the weather, chemicals are lost through leaching and heat. Much of this loss can be prevented by keeping the manure in a compost heap or in a bin or pit(Fig. 25). 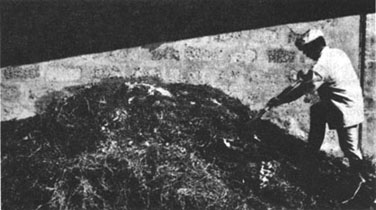 Gather all the materials. Dampen straw or grass by placing in water for 1-2 minutes. Pile wet straw and cover to keep moist.

Next, cut straw into pieces 30 cm. long. Place a layer in the bottom of the hole about 15 cm. thick. Sprinkle in 1/5 of rabbit manure, 1/5 of rice bran or grass, and 1/5 of ammonium sulphate. Place another 15 cm. layer of straw, another 1/5 of rabbit manure, 1/5 of rice bran, and I/5 of ammonium sulphate. Repeat the process until all ingredients have been used up. Cover the pile with grass or pieces of G.I. shed metal.

From time to time, turn the pile. In three to four weeks the compost is ready for use.

In the absence of rice straw or kikuyu grass, use locally available materials such as banana trunks and leaves or any grass that can easily decay.

In view of the emerging and continuing energy crisis our country faces today, the need for the literature on the construction of a methane generator as a source of fuel is of great demand. Methane produced from animal manure could be a cheap, convenient and continuous source of energy for cooking, running a 3-horsepower engine, a small family-size refrigerator and/or even lighting in the home.

A methane generator is made up of two compartments (excavations): a digester with an inverted gas holder and an effluent (Figure 27). The manure from the latter is fed daily into the machine. After the start of operation, the production of methane is continuous.

The digester is an excavation consisting of inner and outer walls made of 4-inch or 10 cm. concrete hollow blocks with a water seal in between them at least 10 cm. wide. The cement used should be mixed with "Sahara", a water proofing agent, and the mixture added in the usual way to (or with) the aggregate (sand and gravel) for filling up the hollow blocks. The inner side of the outer hollow block wall is also plastered with cement mixed with a water-proofing agent. The inner surface of the inner hollow block wall is plastered in like manner. In addition to these, the cement pipes leading to and from the digester are plastered with cement and water proofing agent at their junction with the water seal to ensure that the water in the water seal does not leak through these pipes. The water seal may be filled up partly with sand since the gas holder does not go all the way down.

The inverted tank forming the gas holder is made of an 18 gauge galvanized iron sheet 1.83 m x 1.83 m and 0.91 m high. The gas holder is first rust-proofed with red lead paint and then given one or two coatings of black paint. A i/2 inch G.I. pipe with a gate valve is welded on top at one corner of the gas holder. Four 3/8 inch iron rings are also welded at each of the four top corners of the gas holder to facilitate its removal for cleaning.

To start operation, the digester compartment is filled with manure as fast as possible up to and over the level of the effluent pipe. It is recommended that as soon as the digester compartment is filled, sludge from other successful digesters should be added (inoculated) to hasten the process. Even without sludge from successful digesters, the system will eventually generate methane but it might take 3-4 weeks instead of 2 weeks for gas to be produced when sludge is added. As soon as the digester is filled with manure and inoculated with sludge, the gas holder is placed into the double walled digester compartment. The proportion of methane gas increases with time.

(Used engine oil may be added on top of the water to prevent it from evaporating from the double wall). The valve on top of the gas holder is then turned on, and the gas flows through a Â¼'' G.I. pipe to wherever it will be used within a maximum distance of 50 meters. U-traps are provided along the pipe line to collect condensations of water which might otherwise block the pipeline. The free end of the U-trap should be lower than the gas line.

The manure of as few as 3 pigs weighing an average of 115 kilograms can maintain gas production for the larger model for as long as manure is fed continuously into the digester.

It is desirable to have an alternate outlet for liquids coming from the pig house since the passage of large quantities of water through the digester particularly during rainy season somehow allows the gas in the gas holder to escape through the effluent of the digester.

BILL OF MATERIALS FOR METHANE DIGESTER

This methane gas generator plan can be utilized with any type of animal manure including rabbit manure.

Earthworms in the rabbitry[edit | edit source]

Where earthworms are active throughout the year as in warm climates, they may be used to advantage under rabbit hutches to save labor in removing fertilizer. Make bins the same length and width as the hutch and 30 cm deep for confining the worms. Place the bins on the ground, not on solid floors, and keep the fertilizer moist to insure that the worms can work throughout the bin.

Earthworms convert the rabbit droppings into casts - a convenient form of fertilizer. If you keep a large population of worms, there will be no objectionable odor. In addition very few flies will breed in the bins. It is necessary to remove the manure only at 3 to 6 months intervals. This is especially conducive to areas which have porous soil.

Page data
Retrieved from "https://www.appropedia.org/w/index.php?title=Back_Yard_and_Commercial_Rabbit_Production/13&oldid=627939"
Cookies help us deliver our services. By using our services, you agree to our use of cookies.
Categories:
About Appropedia · Policies · Contact · Content is available under CC-BY-SA-4.0 unless otherwise noted.