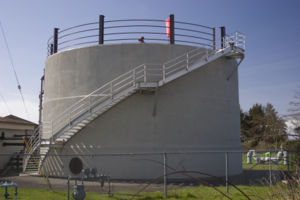 The purpose of an anaerobic digestor, shown in Figure 1, is to employ bacterial biological processes to consume organic matter in the absence of oxygen. In the case of the Arcata Wastewater Treatment Center, a digester is processing the raw sewage-sludge from the primary treatment. As wastewater passes through the Headworks and the Clarifiers (Figure 2)[1] settlable, organic material settles out and is sent to the digesters for processing. The water is diverted and goes on to the oxidation ponds. 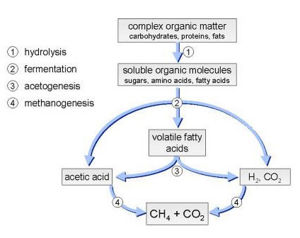 Latin~ Hydro- (water) and -lysis (break) In this stage, water molecules react with the complex organic molecules and breaks them into smaller parts. The bacterial digestion involves the breakdown of major organic components such as sugars, fats and proteins into their respective monosaccharide, fatty acid and amino acid subunits.[3]

Latin~ Acido- (sour, as in excess lactic acid in sour milk or excess citric acid in a sour lemon) and -genesis (creation) The enzymes used by the bacteria in the Hydrolysis stage, continue to break the smaller organic subunits into even smaller parts. The sugars are digested the same way that yeast produce alcohols. Largely, the fatty and amino acids are metabolised in the following Acetogenesis phase. Production of gaseous by-products such as carbon dioxide (CO2) and hydrogen (H2) are elevated during this phase. The hydrogen gas (H2) plays a pivotal role in the final methane-conversion process.

Latin~ Aceto-(vinegar, product of acetic acid) and -genesis (creation) This stage generates acetate and other molecules which break into methane in the next stage. This is accomplished in coordination with the hydrogen gases (H2) formed and the bacterial enzymatic digestion where the organic matter has been broken down to its more basic components.

This stage describes the final step in the digeation of organic material into its simplest form of methane, one carbon bonded to four hydrogens. This methane is produced from the many molecules present at this point. Take for example, a product formed from the previous stage, called an acetate anion:

The methyl component (H3C-) on the left side needs only react with one hydrogen to break away from the ester and become one molecule of methane (CH4).

The digesters in Arcata have increased efficiency and use of energy in the waste they receive by generating biogas (methane) in their process. The methane is used as a fuel for heating boilers that control the temperature of the organic matter. At the end of the digestion process, the 'treated' sludge is dried to produce a nutrient-rich compost.

Cogeneration refers to the use of methane, produced in the metabolic digestion of organic material to creating heat and/ or electrical power. The use of Combined Heat and Power (CHP) illustrates the potential for the reduction of energy consumption in treatment of wastewater and the creation of electricity for municipal grids. The Environmental Protection Agency (EPA) diagrams the process in Figure 4, WWTF refers to wastewater treatment facility:

The Encina Wastewater Authority and the East Bay Municipal Utility District[4] have shown what can be realized with a system that allows for enrgy savings and electric production from cogeneration. Arcata Wastewater Treatment Plant has an electircal cogeneration facility built in the 1980's that is currently offline due to operational difficulties. The City of Arcata is investigating solutions to bring congenerated electricity back online.[5]

However, the Arcata Wastewater Treatment Plant does use the energy of combusting methane to run boilers which bring the temperature of the sludge to around 99 degrees Fahrenheit. This allows the creation of favorable environments for Mesophilic (Latin~ warm-loving) and Thermophilic (Latin~ hot-loving) bacteria that are digesting the activated sludge. The primary digester is heated, the secondary tank for digested solids is not.

The remaining solids present a nutrient substrate for compost material. The Arcata Wastewater Treatment Plant also uses the digested solid as a mixing point to compost invasive hydrocotyl that is removed from treatment ponds.