The headworks are the first component of the Arcata marsh system. They receive the raw sewage that the City of Arcata generates every day. The purpose of the headworks is to pretreat the waste before it is sent to primary treatment, as well as measure the flow of the influent. The headworks are responsible for removing large objects and grit that would be harmful to further components of the treatment system. Passing through the head works are small particles and soluble organic matter to be removed by further treatment, as well as chemicals that may require special treatment.

The headworks of the Arcata marsh Wastewater treatment system (above, photo courtesy of Dr. Dustin Poppendieck) consists of four main components: The influent pump, to move the water along; flow measurement channel, to measure incoming flow; bar racks, to catch large incoming objects; and grit settlement, which settles out. The headworks are named so because they are at the 'head', receiving portion, of the Arcata Marsh system.

The head works of the Arcata Wastewater Treatment Plant system consists of four main components; all of the components are contained in a large, concrete structure. The tops of the channels are open but have grating over them to permit manual inspection of the components by plant operators. 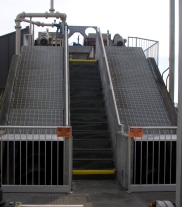 The influent that comes into the head works is first received by a special type of pump called an Archimedes screw pump. The screw pump, shown in Figure 1, lifts the influent so that it can flow down by gravity through the head works and primary treatment. A diesel engine located on site is used to drive the pump system in case of emergencies. To ensure continuous operation of the pump there are two screw components so that one can run while the other is serviced. 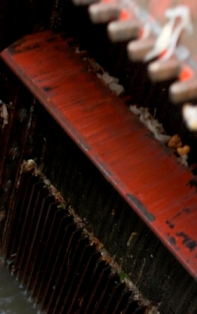 Bar racks are responsible for removing large objects that end up in the sewer system. A bar rack consists of a set of evenly spaced bars that intersect waste flow vertically. Liquid is allowed to flow between bars while larger objects cannot pass and remain stuck on the bars. To allow for flow not to be hindered by objects accumulating at the bars, the bars are cleaned by a mechanical 'claw', which can be seen in Figure 2, that removes the objects. After being removed the material is sent to a land fill. 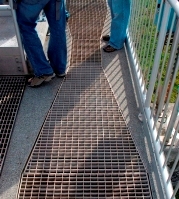 Flow coming into the Arcata marsh system is measured in a flow channel. The measurement works by constricting flow into a narrow channel which causes the water level to rise in the narrower portion. The channel can be viewed from above through the metal grating shown in Figure 3. By knowing the dimensions of the channel and the height of the wave created the operators can compute the amount of influent flowing through the Head Works.

Grit is any large, generally inorganic, matter that is suspended in the influent. "grit is traditionally defined as particles larger than 0.21mm (0.008 in) (65 mesh) and with a specific gravity of greater than 2.65"[1]. Grit consists mostly of sand particles and glass particles that are small enough to have made their way through the bar racks. It is important that grit be settled out because it can be damaging to the mechanical components as well as hinder flow by building up in pipes. Since grit has a relatively quick settling time, it is settled out in a small basin that is contained within the head works. After being settled out grit is removed from the system and dried by a centrifugal dewatering system. This system works by spinning the grit laden sludge in a large cylinder where centrifugal force pushes only the solid sludge to the walls where it is scraped off[2].