The Arcata Wastewater Treatment Plant processes the biosolids from the digester into compost at its onsite composting facility. The finished compost is used as a soil amendment by the City of Arcata Parks and Recreation department throughout Arcata city parks.[1] 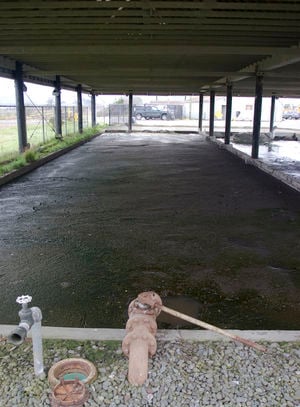 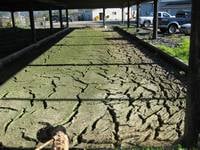 Figure 2.b. Biosolids in drying beds. Photo by Woodland Schultze 2008

Biosolids are the solid and semisolid organic matter produced from wastewater treatment facilities. Although historically called "sludge," biosolids (as defined by the Environmental Protection Agency[2]) differ in respect to the fact that sludge refers to untreated, raw sewage, whereas biosolid refers to the beneficial by-product of sewage treatment that can be used in composting.[3] The Arcata Wastewater Treatment Plant processes its sludge into Class A- Exceptional Quality biosolid.[1] The biosolid is pumped from the digester onto covered outdoor drying beds (Figure 2), and left to air dry for up to six months. The two drying beds are rectangular in shape, four feet deep, and use one center drain. Dewatering is necessary in order to reduce the liquid content and increase the solids concentration to greater than 20 percent.[1] By converting the liquid biosolid into a damp "cake" it can easily be moved into the composting facility. Biosolids can be recycled as soil amendment and or fertilizer due to having nutrients and metals that soils tend to lack.[4] 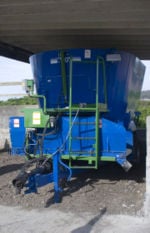 Biosolids can be categorized into either Class A Unrestricted (exceptional quality), Class A restricted, or Class B restricted. Both Class A biosolids, unrestriced and restriced, are sold to the public for home use. When sold, Class B biosloids are used for agriculture and landscaping, in areas of limited public contact. The reason that only Class A biosolids are sold to and used by the public is because they have fewer pathogens which lead to potential harm. For more information regarding the technical differences between Class A and Class B biosolids refer to page six of the 503 regulations.

How biosolids are categorized at Arcata Marsh 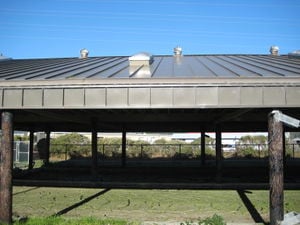 To meet Class A standards for exceptional quality, fecal coliform counts must be less than 1000 MPN (Most Probable Number) per gram of dried biosolids.[7] Also the salmonella levels must be less than three MPN per gram of biosolids, according to the EPA.[4] The criteria differentiating Class A and Class B biosolids in relataion to heavy metals can be found in the 503 regulations on page seven.

Where and How Biosoilds are Dried

Biosoilds are poured into drying beds which are a set of two rectangular cement floored holding areas that have drains. To get an idea of how large they are, look at (Figure 2.b) and compare the bed to the Ford truck in the background. It is in the drying beds that evaporation and transpiration (evapotranspiration) act as the drying mechanism of the biosolids.[8] The hotter and sunnier the year is, the faster the biosolids harden into a dirt-like consistency. Built above the drying beds is a metal roof with air vents and skylights, viewable in (Figure 2.d). Because Arcata gets rain for a majority of the year, this roof helps the biosolids from getting watered down or inundated. Drying can take anywhere between six months to one year. Each year at Arcata Waste Water Treatment Plant two dry beds of biosolids are generated (Figure 2.c).

In order for composting of the biosolid to take place, a bulking agent is added to allow for aeration, porosity, and proper carbon to nitrogen nutrient balance.[9] The composting facility uses wood chips, grass clippings, and hydrocotyl from the oxidation ponds to provide this function. Operators mix a 3:1 volume ratio of woodchips to biosolids in a double auger vertical mixing wagon (Figure 3) and dump the mixture into long, six to eight feet high compost piles.[1]

The Arcata Wastewater Treatment Plant utilizes an Aerated Static Pile composting process (Figure 6). The "static", or unturned compost piles utilize an air supply hooked up to a pipe that is located at the bottom of the pile. The pipe runs through the entire length of the pile and maintains the constant oxygen supply necessary for aerobic activity.[10] During active composting, microorganisms break down the organic material in the biosolids. As a result, carbon dioxide, water, compost, and heat are produced. The composting facility follows the EPA requirements for biosolid compost, performing daily checks to ensure the pile reaches 150 degrees Fahrenheit for three consecutive days, followed by ten days at 135 degrees Fahrenheit.[1] The high temperatures allow for pathogen and fecal coliform elimination or reduction. A pH level of 6 to 8, and a moisture content of 50 to 60% of total weight are also considered ideal conditions.[9] The active process takes about one month to for microorganisms to turn the biosolid and wood chips mix into a stabilized product.

How the Compost is Made[edit | edit source]

After the biosolids are done drying, one part biosoilds is mixed with three parts [1] and two parts [2] inside the mixing machine (Figures 4 and 5).[11] This mixture of 3 parts wood wate, 2 parts green waste, 1 part biosolids provides the correct carbon to nitrogen ratio (around 30:1), helping promote optimal decomposition.[12]

The mixture is dumped into a series of long piles. Each pile sits on top of a large air vent pipe (Figures 7 and 8). This air vent pipe can either feed oxygen to the microorganisms or take it away. Adding oxygen to the pile will raise the piles temperature due to increased microorganism activity. This method of composting is known as aerated static pile composting.[13] A diagram of aerated static pile composting can be seen in (Figure 6).[14] 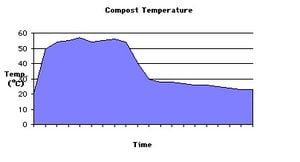 After the month long active composting process, the Arcata Wastewater Treatment Plant cures its compost piles for an additional 30 days.[1] During curing, the compost mix is stabilized as microbial activity decreases and the pile cools. Operators take eight samples from different locations of the pile and bring them to a lab to test for fecal coliform and trace metal contents. If the compost mixture has passes inspections for EPA standards, it is taken by the City of Arcata Parks and Recreation Department. The City of Arcata brings the compost directly to site locations, or store it by Health Sport, an Arcata community center.[1]

Each pile of compost has within it a number of different microorganisms. Each type of microorganism takes part in the decomposing process, some during certain temperature phases only. While the aerated static compost pile sits, mesophilic bacteria and fungi start decomposing organic material. Mesophilic bacteria decompose organic material only in the first and last phase of composting, when the temperature of the compost pile is less than 40 degrees Celsius. A large population of invertebrates aid in this phase of decomposition as well.[16] Some examples of invertebrates include: Ants, beetles, worms, and mites. Invertebrates decompose the larger particles in the compost, making work for the bacteria and fungi easier.

As the temperature of the compost exceeds 40 degrees Celsius thermophilic bacteria take over decomposing for the mesophilic bacteria and invertebrates. Actinomycetes are another decomposer of the pile.[17] These are a major contributing factor to the smell of compost and can be seen on the surface of the pile appearing as a spider's web. It is the combination of microorganisms that makes composting possible.[12][18] 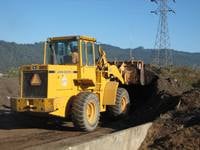 When handling biosolids and or compost, people are exposing themselves to a number of potential dangers. If ingested, both biosolids and compost contain a large number of pathogens, which could cause disease and possibly death. Skin, eye, and respiratory protection in many situations are required, especially when handling Class B biosolids. One disease known to be caused by the bacteria in compost is legionnaires 'disease. Another potential danger is actinomycosis, a disease caused by Actinomyces israelii. These two types of diseases are related to human inhalation and or ingestion of compost. Keeping that in mind, the people who handle biosolids and compost at Arcata Marsh wear protective gear, masks, and wash up after working. As long as one doesn't ingest/inhale compost or biosolids, chances of getting sick are minimal. Another danger involved with composting on such a large scale is the operation of heavy machinery (Figure 10). OSHA has set safety standards for facilities such as Arcata Marsh.[19][20]

Each year Arcata Waste Water Treatment Plant generates only a few piles of compost. Instead of selling it to the public, the City of Arcata gives the compost to the Park and Recreation Department. There the compost is spread about in the local parks and or recreation areas.

Waste water treatment plants such as Arcata Marsh produce large amounts of biosolids. The biosolds initially have high pathogen counts, for example: more than 1,000 MPN fecal coliform per gram biosolids. Composting is used to kill human and plant pathogens as well as balance out the pH to roughly 7. To make the biosolids meet Class A exceptional quality they are composted.

The compost is used exclusively by the City of Arcata Parks and Recreation department and is not available for sale. Presently, the composting facility does not produce enough compost to supply the City Parks department and the general public.[1] The final compost product, however, satisfies the EPA requirements for a Class A biosolid, and can therefore be used in household gardens without any regulations.[21]