Overview of a Clarifier[edit | edit source] 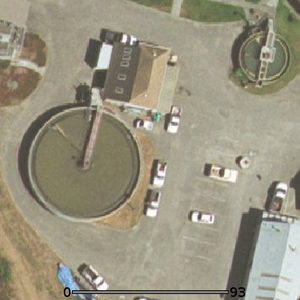 Fig 1: Aerial view of Arcata Marsh clarifiers. The 60 ft tank can be seen on the left, and 26 ft tank on the right.

A clarifier operates on the idea of slowing wastewater down so that suspended solids will settle out on the bottom of the tank. Wastewater is pumped to the clarifier after large solids and grit are removed. This removal occurs in the first two stages of wastewater treatment.

In a clarifier the solids that settle to the bottom are called sludge. Less dense oils and solids called scum will float on the top of the tank. The sludge and scum are then removed, and the wastewater is pumped to oxidation ponds. After the entire process is completed the clarifier will have removed 40-60% of suspended solids[1].

The Arcata Wastewater Treatment Plant is equipped with two clarifiers. Figure 1 shows both of these clarifiers. The first is a 60 foot diameter tank that is used at all times. The second is a 26 foot diameter tank that provides support during frequent winter rains. The main tank cannot process the increased volume of wastewater on its own. The smaller clarifier can also be used when the main tank is maintenanced[2]. 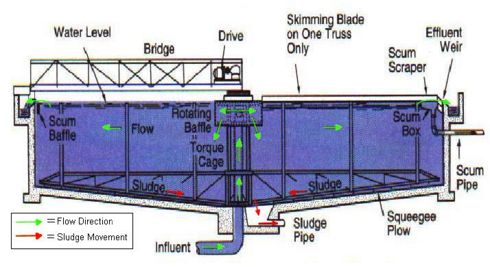 The first task of the clarifier is to slow down the wastewater it receives from the headworks. Water first enters the center of the tank through the influent pipe. A baffle slows down the velocity of the water to about 0.03-0.05 feet per second and directs the flow of water downward[4]. The baffle is a cylinder surrounding the end of the influent pipe. 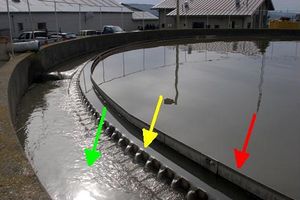 To ensure a consistent water flow the clarifier must also slow down the effluent (wastewater leaving the clarifier) evenly. The perimeter of the tank is designed to accomplish this. A series of v-notched weirs along the edge of the tank slow the water as it departs. In Figure 3 the weirs are pointed out. Once over the weirs the water enters the effluent launder (a channel around the outside of the clarfier). The wastewater can be seen flowing into the effluent launder in Figure 3.

If water does not flow evenly throughout the clarifier, the settling process will not occur evenly. This uneven flow is known as hydraulic short-circuiting[5]. 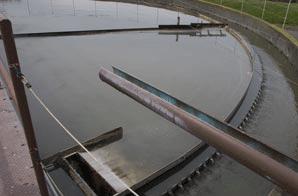 Fig 4: The skimmer arm can be seen at the top of the photo. (Source: Dustin Popendieck)

The denser solids settle on the conical bottom of the tank in the form of sludge. A large rake with a squeegee like assembly rotates and moves the sludge towards a hopper at the bottom of the tank. The sludge is then pumped to the digester for treatment.

Lighter solids and oils rise to the top of the tank in the form of scum. Scum is removed from the tank by a rotating skimmer arm seen in Figure 4. The blade like arm collects the scum into a trough on the perimeter of the tank. Once the scum is collected it is transported to a landfill. Both the rakes and arm rotate together as they remove both sludge and scum from the tank.