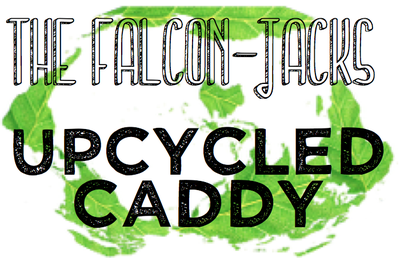 Zane Middle School is a middle school located in Eureka, California that educates 6th to 8th grade. Team Falcon-Jacks partnered with Zane Middle School to work with Elizabeth Baker, a mathematics teacher. Baker teaches 6th and 7th graders with a variety of creative tools and supplies that require organization and student accountability. Team Falcon-Jacks assignment was to create three caddies built from upcycled material for Elizabeth Baker to store school supplies and other school materials that the students utilize. Further work was focusing on the student accountability in which the caddies provide, and safety. Team Falcon-Jacks was composed of four Humboldt State University students who took Engr215 Introduction to Design during their Spring 2014 semester: Kamau Bethea, Mackenzie Danies, Diego Harrison, and Allison Tapaya. 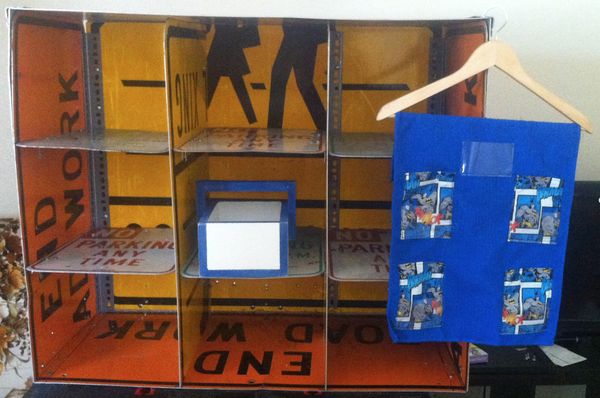 Figure 1: Team Falcon-Jacks final Upcycled Caddy designs (showing only one of each of the Hanging Calculator Caddy and Desktop Caddy).

The Falcon-Jacks final design is a three part caddy organization system; The Hanging Calculator Caddy, the Desktop Caddy, and the Street Sign Storage Caddy. Each of these caddies help organize specific supplies.

The Hanging Calculator Caddy organizes and stores all the calculators in a hanging caddy along the wall in the classroom for easy access for students. The shallow pockets also allow for the instructor to see if the students have returned their calculators or not. Each group of four students has their own Hanging Calculator Caddy. Team Falcon-Jacks built nine caddies each with different themed fabric pockets to provide unique aesthetics to each. 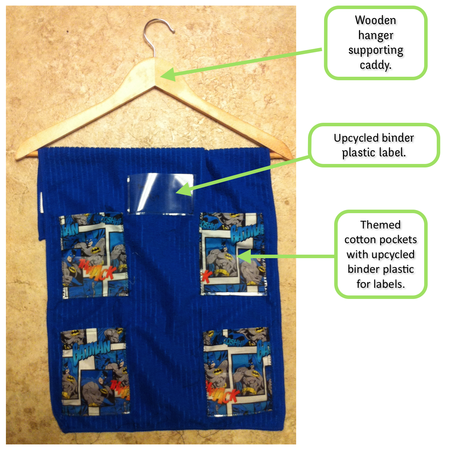 The Desktop Caddy organizes the materials the students will be utilizing that day. Each group of four students has one Desktop Caddy. Team Falcon-Jacks built nine caddies. The caddy is coated with melamine allowing the teacher to easily clean caddies with antibacterial wipes. 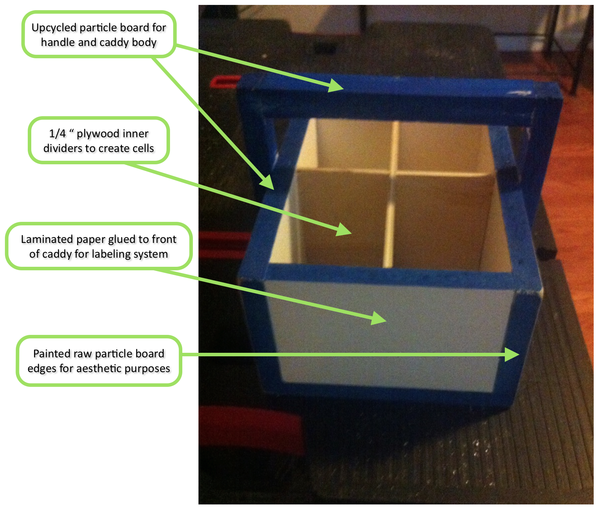 Team Falcon-Jacks objective is to design a long lasting organization system that allows students to be accountable for their materials and promote upcycling to young minds. The upcycled caddies will provide the teacher with more visual access to supplies.

To test the durability and student accountability aspects of the Hanging Calculator Caddy, the caddies were filled with calculators to make sure each calculator was easily visible and the caddy was capable of holding the weight of a full set of calculators. They were also tugged on with different amounts of force to see how sturdy the snaps are. The Hanging Calculator Caddy’s held up to the stress, and showed no signs of ripping or tearing in the fabric. However, if tugged on with an extreme amount of force the snaps could break and may require resewing. The calculator pockets showed to be sturdy with heavy amounts of force placed on them when placing in calculators.

To test durability of the Desktop Caddy each team member of Team Falcon-Jacks dropped each of the Desktop Caddy’s from shoulder height to make sure no chipping of the melamine (the white plastic coating) or breaking would occur. After doing so each caddy was inspected, to find only one with a slight chip on the corner, though it was easily fixable by sanding the area quickly. To test effectiveness they were filled with supplies and tools to make sure that the students could easily handle them, and manage their supplies in their caddy.

The effectiveness of the Street Sign Storage Caddy was tested by filling it full of fully loaded Desktop Caddies, to make sure it could handle the weight from the Desktop Caddies. The Street Sign Storage Caddy was capable of holding up all the Desktop Caddies with no issues. To make sure it was completely safe a member of Team Falcon-Jacks ran their hand along every previously sharp area to make sure the vinyl tubing was doing its job and covering all the sharp places. The members of Team Falcon-Jacks also spent approximately five minutes using the caddy extensively. The members put the Desktop Caddies in and out, did things around the caddy to test its stability, and made sure there would be no hidden sharp parts or dangerous parts that were previously overlooked. In the five minutes of extended use no injuries occurred. The members of Team-Falcon Jacks also applied various amounts of force in order to make sure it wouldn't tip, which it didn't. It stayed stable on the flat surface it was located on.

During the process of building all three caddy designs, The Falcon-Jacks experienced several issues with the original designs.

Team Falcon-Jacks originally decided on using a quilted method to create the backing for the Hanging Calculator Caddy. Upon further research and testing, Team Falcon-Jacks decided to use new store bought dishtowel as a backing. This decision was based upon dishtowels being more sturdy then a quilted method, and more likely to hold up to the wear and tear of middle school students.

The original design of the Desktop Caddies, used only screws to connect the handles to the body of the Desktop Caddy. This turned out to not work because the screws allowed for the handle to rotate, which made carrying them unstable. Instead, a combination of wood glue and screws were used to reassure there would be no movement while being carried. The melamine, which was already coated on the upcycled particle board, also turned out to be sharper than expected once cut. Because of this, the sides were sanded down as much as they could be. The particle board also split on the bottoms in some caddies because of the pilot hole was too small. Once a large pilot hole was provided the drilling went smoothly. All cracks were covered with wood putty.

Almost the entire design Street Sign Storage Caddy had to be re-designed once it became clear that using wood would be too heavy, and it wouldn't hit the upcycling criteria. There were many other options for building a storage caddy, but focusing on the aesthetic criteria and the upcycled criteria, street signs became a clear option. After purchasing 36 pounds of street signs, Team Falcon-Jacks redesigned, and renamed the caddy design to the Street Sigh Storage Caddy. The caddy was now to be built entirely out of street signs. Large ones were used to make the backing, the sides, the top, and the bottom. Smaller parking signs were used to make each of the interior pockets, and the hinged whiteboard area. After showing the Street Sign Storage caddy to the client, Team Falcon-Jacks decided plotted angles instead of L brackets to hold together the larger parts of the Street Sign Storage caddy, so that it would last many years of hard use.

Due to the durability of the Street Sign Storage Caddy there are no anticipated repairs within the first 3 years of use. The Desktop Storage Caddy is anticipated to not require any repairs after the first 2 years of use. However, if dropped on a hard surface, such as cement, form a height greater that 5 feet there may be some chipping on the sides of the caddy. The Hanging Calculator Caddy was shown to be the least durable our of all three caddy designs, and would require minimal repairs annually depending on its use. The table below describes the material needed and cost of material required to fix any damages.