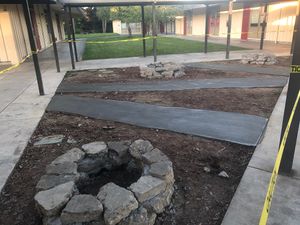 The purpose of this project was to redesign the triangular area in front of Catherine Zane Middle School, Eureka CA. A new, even path made of aggregated concrete in a solid Z-shape was implemented, along with three planters made of the repurposed concrete from the former path.

This project was designed by Team Geometrees, HSU students taking ENGR 215 taught by Lonny Grafman in Spring 2019. Catherine Zane Middle School, a STEAM-based charter middle school, was the client. The client representative for Zane was Trevor Hammons, a school admin. Trevor has worked with Grafman and HSU for several years, and had a previous HSU student group work in the same area as this project. By the time Team Geometrees saw the project, it had decayed to the point of being unsatisfactory. The previous area had an uneven, star-shaped path made of reused concrete blocks. Additionally, there was only wood chips in the triangle surrounding the path.

The Triangle of Death lacked desirable aesthetic, with an uneven path in a star-like design and no plants. Team Geometrees decided upon several criteria to find the solution that best fit the client's desires for the project.

The final project is composed of a Z-shaped walkway made of aggregated concrete that is level and wide enough to be wheelchair accessible. Additionally, there are three planters that will prevent the plants from being stepped on and killed while also doubling as seating for the students during break.

Two separate forms of prototyping were done for the path and planters.

Prototyping for the pathway began with a simple CAD model of the Triangle and the desired location of the path. String and stakes were placed along the designed outside of the walkway. From this, we learned that the poles surrounding the Triangle would interfere with our walkway and make it inaccessible to wheelchairs. The string was relocated to where the path would not interfere with the poles.

Prototyping for the planters consisted of attempting to create three rings of concrete blocks, each one on top of the other. We kept attempting to fit the pieces together, similarly to a puzzle, in order to get the planter to be circular in shape, stable, and flat on the top.

1
Place liners in correct location and depth as desired pathway.
2 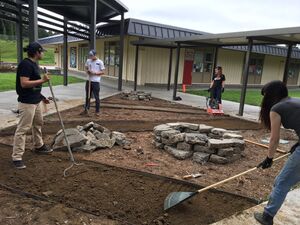 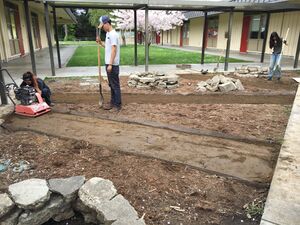 Compact the dirt between the liners
4 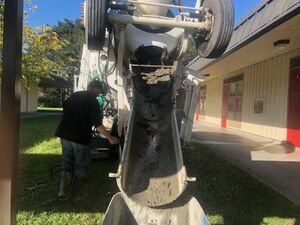 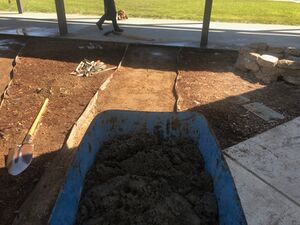 Pour concrete between liners and smooth the top of the concrete using hand paddles
6
Wait an hour or so for the concrete to be slightly drier and then lightly run a brush over the top to prevent slipping
7
Leave to cure for several days
1
Make a ring using repurposed concrete blocks
2
Wet the tops of the blocks
3
Apply Quikrete to top
4
Lay another ring of concrete on top
5
Wet the tops and apply Quikrete again
6
Lay a final layer of concrete, taking special care to ensure it is flat and even on top.
7 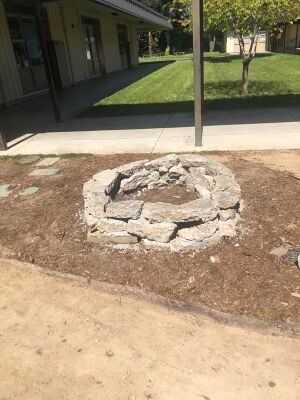 Wait at least a day to dry

Maintenance for the project is very simple. The pathway should be washed and brushed yearly. 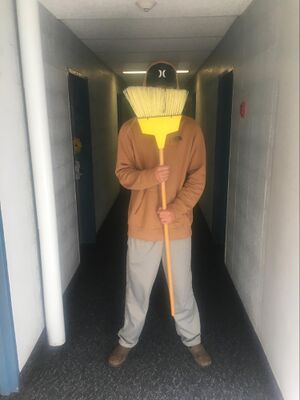 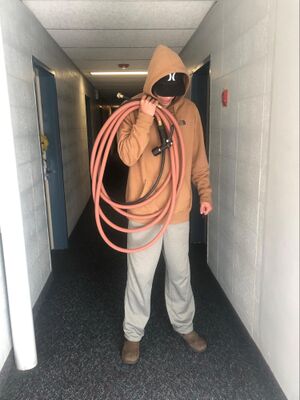 The walkway was very successful and is now much easier and safer to walk on. Although the team had wanted to use permeable concrete and were unable to find the means of acquiring it, the aggregate concrete ended up working well anyway. Team Geometrees was very satisfied with how both the Z-path and planters looked. Next steps would be to fill the planters with soil and plants.

One other option that may be useful for other projects would be to use a more permeable concrete for the walkway, which would allow for water to flow through the path. This would make it rougher and less wheelchair accessible, however it may suit better depending on the needs of the project.

The Triangle of Rebirth Z-shaped pathway is functional, however the liners were sticking out in multiple locations by the path. Additionally, the repurposed-concrete planters were not there. We reached out to Trevor Hammons, the counseling services director. Hammons said that the planters were removed because they were never filled or planted. He suggested that future projects be followed-through to prevent incompletion and lack of purpose. He also mentioned there were worries about ADA compliance, and pointed out three other areas that were ADA compliant.

There are currently no plants being grown within the triangle of rebirth. Trash was also found laying around. Overall, the site is not being maintained to keep its aesthetic, which was one of Zane Middle's schools priorities for the project.

Page data
Retrieved from "https://www.appropedia.org/w/index.php?title=Zane_Middle_School_triangle_of_rebirth&oldid=639785"
Cookies help us deliver our services. By using our services, you agree to our use of cookies.
Categories:
About Appropedia · Policies · Contact · Content is available under CC-BY-SA-4.0 unless otherwise noted.