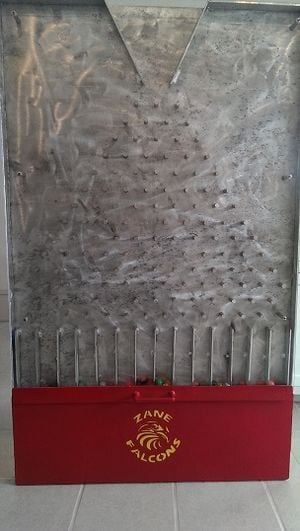 This page and project was created by team GID, who's members include Chris Arcani, Neil Cudney, Marjani Ellison, and Eli Wallach. GID is from HSU's spring engineering 215 class. Our selected client for the design project during the course was Zane Middle School. Our project needed to visually demonstrate probability while being safe, interactive, and aesthetically appealing. The machine that best matched our criteria is a quincunx, which fits well with STEAM. STEAM is a learning motto set for Zane Middle School which stands for: Science, Technology, Engineering, Arts, and Mathematics. The quincunx machine sorts balls by replicating pascals triangle to make out a bell curve, demonstrating probability to Zane Middle School students in multiple ways.

In the fall of 2013, Zane Middle School adopted the academic program STEAM with the goal of providing students from 6th to 8th grade the skills needed for the 21st century workplace. Zane Middle School recently formed a partnership with Cal Poly Humboldt (HSU) around STEAM principles. Therefore, HSU students in ENGR-215 use their knowledge of design and engineering to build structures or visual educational demonstrations to provide middle school children hands-on experience with the subjects covered by STEAM. Team GID (Get it Done) was tasked with the building of a probability machine to provide middle school students a hands-on demonstration of the mathematical concepts of probability.

Zane Middle School focuses on the STEAM curriculum for students from sixth through eighth grade. Zane strives to give students an effective education by focusing on hands on activities. Zane Middle School asked Humboldt State's engineering 215 class to help improve their campus and teaching implements for the second consecutive term. Our goal is to design and build an effective demonstration model that helps to teach students probability in a hands on way. We made a criteria table to better reflect what our client wanted to see in our project. Our criteria is listed in the table below with a weight for the importance and a comment for the constraints.

The quincunx machine teaches applications of mathematical probability. The probability of a single ball bouncing to the left on the first peg is 50%. The probability of a ball bouncing to the left many times in a row is significantly less, because there are more paths leading to the middle of the machine than there are paths leading to the sides. As a result, the balls should form a bell-shaped curve at the bottom of the quincunx. The conversion formula, shown below, is used to convert Pascal's Triangle to The Probability Triangle. In the formula, k is a number in Pascal's Triangle, and n represents the row number that contains k. By this definition of probability, probability is a number between zero and one. Each row in the probability triangle should sum to one. The larger probabilities at the center of The Probability Triangle mathematically illustrate the bell-shaped curve that forms at the bottom of the quincunx.

The machine is designed to capture the attention of middle-school students and to be seen by a large audience. The machine is three feet wide and five feet tall in order for it to be seen by large audiences. The backboard of the quincunx is made of aluminum sheeting along with the collection chute which collects the balls once the demonstration is done. The front viewing sheet is made of acrylic, and the collection chute is an aluminum box. The rubber bouncy balls used to make the curve will be one inch in diameter. The pins that the balls will bounce off of will be aluminum rods cut into two inch sections that are half an inch in diameter.

How to use[edit | edit source]

The quincunx machine creates a bell curve using bouncy balls that the students place in the hopper. The machine demonstrates probability using a basic template by only using the 50/50 probability of a ball going one way or another. The continuous equal chance of the ball falling one way or the other keeps the probability easy to predict and easy to calculate. Some of the bouncy balls that have more elasticity leave the pattern and end in the outer columns.

Cut aluminum round to pin lengths and stand off lengths.

weld stiffener to the back and chute details to the front.

Although the quincunx machine is not the most interactive probability machine, it demonstrates the highest safety and educational value. The bouncy balls sometimes skip a few pegs, but the curve at the bottom of the quincunx still accurately represents the probability curve. The quincunx is made of durable aluminum metal, so the maintenance cost is cheap. The machine only needs to be unscrewed with a Phillips wrench and wiped with a damp rag once a month. The machine will be stored at Zane Middle School in Eureka California.

The quincunx was present at the 2015 math festival located in Eureka's Bayshore Mall on April 25th. The machine does a great job of catching the attention of both children and adults. The machine is durable enough to withstand any shaking caused by children, and children are compelled to keep guessing which chamber the next ball will land in. The only criteria is not fulfilled is the portability. The quincunx is heavier than expected, and requires two adults to move.