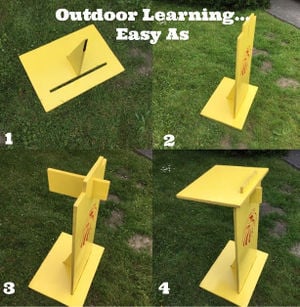 How can you bring a classroom nearly anywhere? Parties at Catherine L. Zane Middle School and Cal Poly Humboldt were pondering that very question. Team Yerba Mates and one other team were tasked with answering that question. After some deliberation Yerba Mates decided to focus on the instructor's portion of the classroom. The team went through several brainstorming sessions and determined that the most basic functional aspects of a classroom required by an instructor would be a level surface on which to store lecture materials and a writing surface to convey information to students. Due to frequent rain and winds in Humboldt County the client, Zane Middle School, requested the system be portable and storable. Yerba Mates finally decided on a fold-flat, collapsible podium and a whiteboard with shelving.

Zane Middle and HSU, located in Eureka and Arcata respectively, lie on a six mile stretch of land that straddles Humboldt Bay on the Northern California coast. HSU's engineering department and Zane have been collaborating for several years to enhance student experiences at both institutions by requiring teams of students in Engineering-215:Intro to Design construct and deliver a project to Zane Middle School. Zane's objective was to have several teams create outdoor learning spaces and tools to cultivate creativity and to provide more opportunity for inspiration. One of those teams is the Yerba Mates. The Yerba Mates are Bailey Cochran, Fiona Connor, Daniel Evans and Albert Figueroa. The course is instructed by Lonny Grafman and the team's liaison with Zane was Trevor Hammon.

The final design consisted of a fold-flat podium made of MDP (medium density particleboard) and a second-hand Quartet whiteboard attached to an AV cart donated from Zane Middle School. When the podium is broken down to its constituent pieces it easily fits on the cart making the whole system portable as a single unit.

The project went through several design iterations before the group settled on the final product. Initially the group went through numerous brainstorming sessions to isolate traits of a potential design that met as many criteria as possible. Early designs consisted of podiums on wheels, desks on wheels and a podium with nesting sections that could be stacked atop one another to name a few. In the beginning, the whiteboard was designed to be a cabinet with two doors that opened opposite each other, with the insides of the doors also being of a whiteboard material. The whole cabinet was designed to be made of wood with the whiteboard surfaces either being painted on or pressed on like wallpaper. Prototyping occurred in several phases. Initially, prototyping was done with donated materials from SCRAP Humboldt. Those prototypes included a miniature whiteboard design made of stir sticks and a collapsible podium made of Altoid tins. The next prototype was a collapsible stand made out of some scrap wood. The prototype was made by Albert and was inspired by a collapsible foot stool he had in his house. After perusing podium designs on the internet, the group eventually settled on a design that consisted of interlocking pieces that were held together with gravity and pressure. Yerba Mates immediately set to work on recreating the design with pieces of cardboard. Several pieces of cardboard were glued together to give the model rigidity similar to that of wood. After the success of the cardboard podium the decision was made to go ahead and acquire the materials to begin constructing full scale, final design prototypes. After several mistakes the team learned which cuts to make and how to properly make them. A few additional pieces were added to give the podium added rigidity and stability.

Testing of prototypes yielded several design changes. The prototype based on the folding step stool showed the Yerba Mates that a collapsible or folding podium would not only be too difficult to build but would also likely be too difficult to use on a regular basis. Testing of the MDP prototypes revealed that a writing surface that was angled downward would be more desirable as that was the way the writing surface was inclined to lean due to the force of gravity. Testing of these prototypes also yielded two pieces that were added to the final design. One of those pieces was a triangular piece that holds up the "body" of the podium. The second piece was a semi-rectangular piece that stops the writing surface from slanting to an unusable angle. Lastly, it was decided that a small piece of wood towards the bottom end of the writing surface was necessary to prevent papers, reading materials and writing utensils from falling off of the podium.

The materials used for the whole design is shown in Table 2. The time (in gender-nonspecific hours) spent on the project is shown in Figure 5. 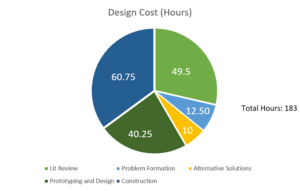 One person is easily able to move the cart along various terrains with the stored podium. The body of the podium slides in and out of the cart with little effort. The podium is simply assembled and disessembled by one individual. The Whiteboard can be taken off by an adult when needed to combat storage issues.

To build the podium:

Next, cut out the body support by cutting out a triangle with a 9" base, a 6" height and a hypotenuse fitting of the Pythagorean Theorem. Then, cut out a rectangle measuring 9" long by 4" tall. This is the most difficult piece to fashion as one end of it must be flat for a few inches and then very gradually taper to an unmeasured angle. This angled portion is what the writing surface will rest on. This rectangular piece must also have a 4" long by 1" tall piece cut out of it to prevent it from slipping out of the hole cut into the body.

Then, cut out another rectangular piece measuring 20" long by 17"tall. About 2" from the top, again drill a pilot hole and use a jigsaw to cut out a rectangular hole ¾" tall by 10" long, leaving 7" on either side of the hole. This will be the writing surface.

To build the whiteboard cart:

Next, use and angle grinder or other tool capable of cutting metal to fashion a rectangular hole on one side of the middle shelf that is 18" long and ¾" wide. This hole will hold the body portion of the podium. Creating a clean cut in the metal proved to be difficult for the Yerba Mates with the tools at hand. So, they used pipe cleaner to cover up the jagged edges of the cut to protect both people's hands and the podium body. Pipe cleaners were also used to cover the sides of the L-brackets.

Lastly, paint, finish or decorate however you please. 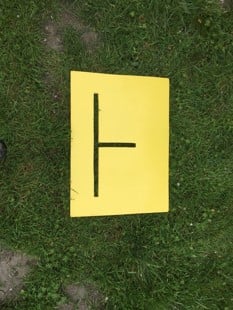 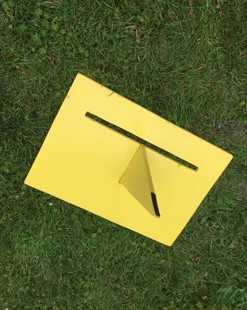 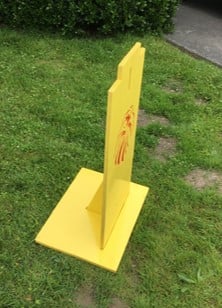 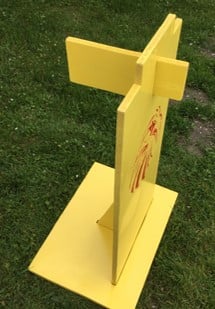 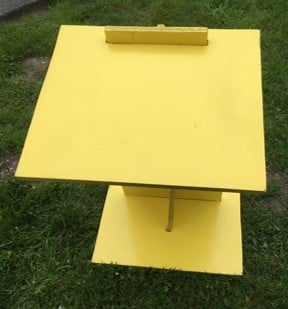 The few components that make up the design require very little maintenance. The Yerba Mates foresee only needing to oil the wheels on the cart infrequently and possibly touching up the paint. A regular cleaning of the whiteboard with alcohol or sprays made specifically for dry erase boards would prevent the dulling of the sheen on the whiteboards surface.

Troubleshooting the finished product should be relatively simple. The team foresees the only problems being a broken wheel or a damaged member of the podium or cart. In either case a simple internet search should yield ample potential fixes to the problem.

The Yerba mates had limited tools at their disposal. All cuts were made with a jigsaw. In retrospect, a table saw or handheld circular saw would have been better for the all of the long cuts that were on the side of the boards. Using proper tools for cutting metal would have also yielded a more aesthetically pleasing final product. While MDP was cheap and repurposed it also required an exceptional amount of sanding. Working with a more finished material to begin with would have saved time and made the final product more aesthetically pleasing but would also have increased the cost of the project. The group also welcomes any other suggestions for future changes to this design. An internet full of minds is better than four. 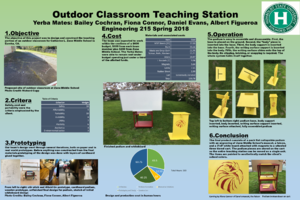 Fig 6: Final Design Project Poster
Page data
Retrieved from "https://www.appropedia.org/w/index.php?title=Zane_Middle_School_portable_teaching_station&oldid=639684"
Cookies help us deliver our services. By using our services, you agree to our use of cookies.
Categories:
Comments
Privacy policy · About Appropedia · Disclaimers · Mobile view · Content is available under CC-BY-SA-4.0 unless otherwise noted.
</html