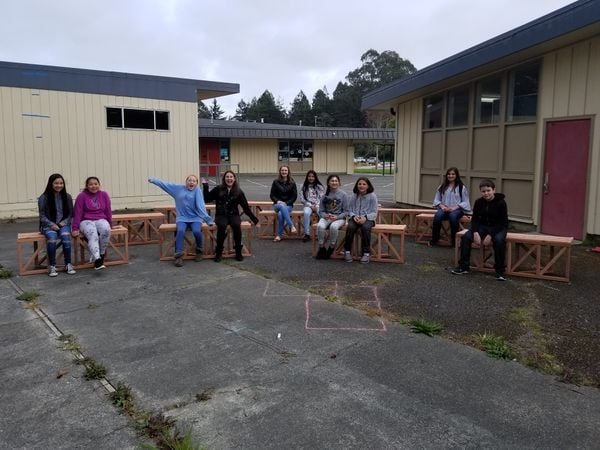 The team Suoicortalaepxcitsiligartilacrepus was tasked with providing both seating and writing surfaces for Zane Middle School's outdoor classroom. After determining criteria and parameters, and applying these to multiple seating concepts and designs, it was decide by our clients that the seating would take the form of 12 folding, truss-style benches. The benches would fit the S.T.E.A.M. orientation of the school by being constructed with engineering design principles and of artistic design. The benches are easy to set up, long lasting, safe, and collapsible. All benches, writing surfaces, and shadowboxing for multiple bench arrangements were completed on time, and only slightly over budget.

In the Spring of 2018, Engineering 215 Team Suoicortalaepxcitsiligartilacrepus was commissioned by Lonny Grafman and the Faculty at Zane Middle School in Eureka, California to build an outdoor classroom for students and teachers to use at Zane Middle School. The school has been the recipient of many projects in the past, but until now did not have an outdoor classroom.

The goal of this project is to create an outdoor classroom learning environment for junior high school students.

The project criteria outlines qualities which the outdoor classroom must possess as desired by the client.

The final bench design is built of light-weight redwood planks, which will ensure longevity outdoors. It also folds to compact dimensions of roughly 18"x58"x5". The legs hinge outward, and the lid becomes the seating platform, and is placed on top of the unfolded legs.

The writing surface design is made from standard clipboards and white board applique. The applique is applied to the reverse side of the clipboard to provide an alternative writing surface that does not interfere with the front side.

This first prototype used pegs that fit into slots to support the seating platform. Unfortunately the pegs were difficult to set up, and could fall out if the bench was used on uneven ground. The also increased the weight, and decreased the stability of the bench. This prototype also had a handle and casters, unfortunately the casters were so small that the bench had to be held up at an extreme angle for them to work, and on rough surfaces they did not work that well. The bench was also extremely heavy due to the 2"x4" members that greatly increased the weight of the bench.

The next step was to create a bench with a new support structure that could be kept all in one piece. Several designs were created by constructing prototypes out of stirring sticks. Eventually a wing-style folding bench with a hinged seating platform was decided on. All handles and casters were removed, as viable versions of the wheels were too expensive.

After building a prototype with the new folding legs, it was apparent that this was the design to pursue, and that it made more sense for the seating platform to be completely separate, as hinging it would add unnecessary cost and complication to the design. It was also resolved to replace the 2"x4" seating platform with thinner lighter fence boards. The client confirmed that his was the proper course and seemed excited for the direction that the project was heading. It was also figured out that the bench could be built to partly fold into itself by constructing it out of 2"x2" and allowing building the seating platform to partly encapsulate the folded leg structure. These changes made the bench weigh less, and fold into a much smaller form factor. It was these changes that led to the final design.

Tests consisted of sitting on the benches to test the weight that they could hold. Three large adults could sit on each bench without difficulty. The benches were brought to Zane Middle School, where the client and multiple students tested the benches. All tests confirmed that the benches could reliably hold multiple students without any signs of weakness or instability. 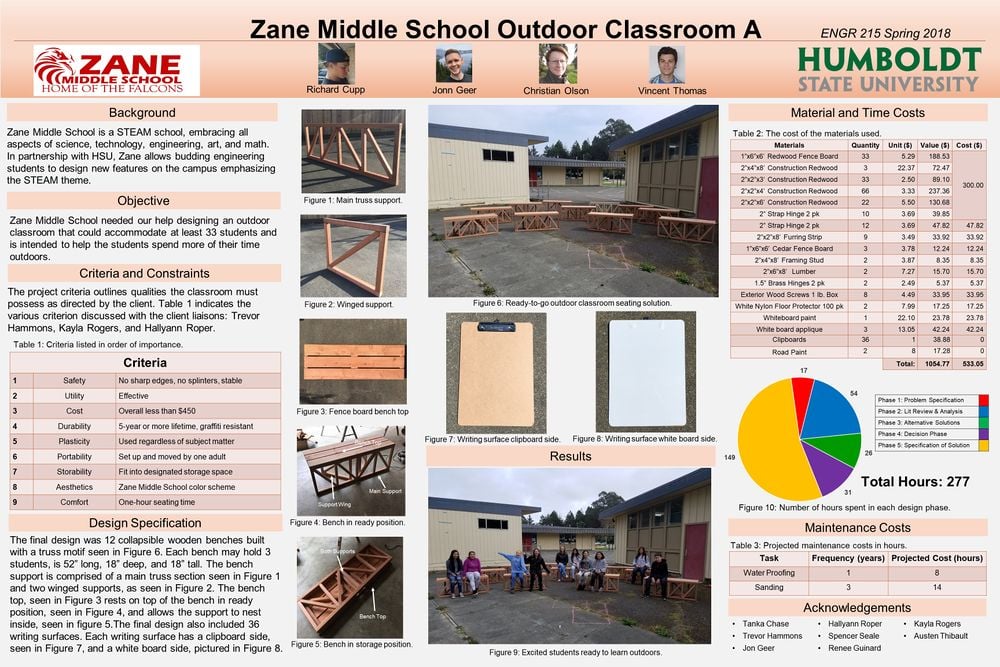 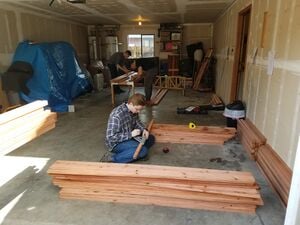 A handsome student measuring wood
Accurately measure out the lengths of all components.
2 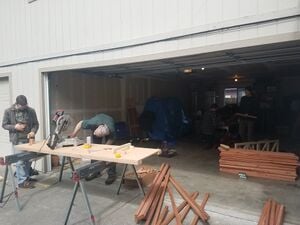 cutting the wood
Cut the wood to the right measurements
3 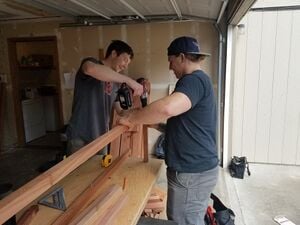 screwing the pieces
Attach all of the pieces together.

The truss bench design for the Outdoor Classroom is a two-piece collapsible bench. To set up the bench for class, students will need to transport the bench, separate the two-piece design, and assemble the bench.

The process to take down and store the bench can be done by the same process in reverse. A visual step by step process can be seen below.

This is only how to troubleshoot basic operation.

In the future it may be necessary to sand the benches, or lacquer them with a thick finish, so as to reduce splinters.It may also be a good idea to add velcro straps or latches to make it easier to carry without falling open. Wheels and other forms of improving mobility may also be added, but as of now, the benches are light enough to be carried by one or two children. Painting the benches with the school colors may also be a great art project, as well as increase the aesthetics of the benches.