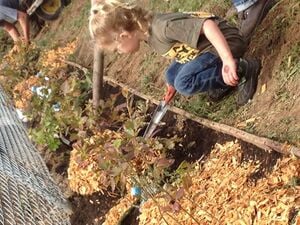 Team Seedling is composed of four Cal Poly Humboldt students: Tanya Garcia, Jax Gill, Jared Goebel and Danielle Holter. They are currently enrolled in the spring semester of 2014 Engr215 Introduction to Design taught by Lonny Grafman. The group is collaborating with Zane Middle School to create an edible landscape on campus that will be utilized by students and community members through out the year. The edible landscape must be aesthetically pleasing so that it attracts students and sparks their interest with nature.

The objective of Team Seedling is to add sustainable edible landscaping to Zane Middle School's campus. This landscaping should be low maintenance and child friendly while providing educational value and awareness of the local and native environment. Table-1 lists the criteria that were created along with the specifications and considerations emphasized by Zane Middle School. The criteria are weighted on importance which aids in making the final design decision.

The Rainbow Walkway is a half oval or "rainbow" consisting of shrubs aligned on the east side of the garden. Within the half oval there is a semicircle with shrubs, ground cover, a bench and a wooden pamphlet holder. There's a 9 foot walk way between the two beds, thus creating a rainbow shape. There are five trees, two of which are to the right of the rainbow and to the left are the other three trees in a triangle shape, equidistant from each other. There is another bed against the northeast fence of the school garden which consists of blueberries, grapes, and ground cover. Thanks to donations and discounts from various sources, this design fits perfectly within the budget. The layout is aesthetically pleasing because of the immense contrast in colors and easy to mow around.

The Rainbow Walkway has three berry planters and five tree planters. There is the half oval berry planter on the east side of the garden containing 3 salal, 2 flowering currant, 2 rosemary, and 2 borage, shown in figure-2. The two flowering currants will become the larger shrub for this bed and provide beautiful pink flowers.[1] Salal was used as a native groundcover.[2]Borage, with its blue star shaped flower, was chosen to incorporate edible flowers into the design and for contrast against the flowering currant.[3] Rosemary was chosen to add a nice smell to the space while also providing contrast to the flowering currant.[4] The bench and pamphlet holder are also placed in this planter, as it is centrally located. 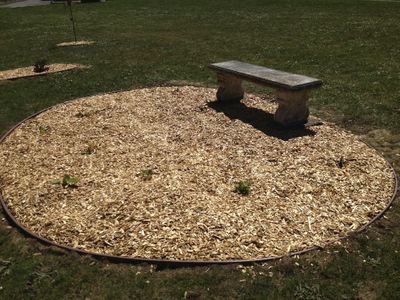 There's a 9 foot walk way behind the oval followed by the rainbow shaped berry planter. The rainbow planter, shown in figure-3, contains 8 Chilean guava, 8 Oregon grape, 6 wild strawberry, and 10 huckleberry. Chilean guava was chosen as a sweet late fall producer.[5] Beach[6]and woodland[7] strawberries were chosen as a native groundcover. Two different varieties were included in case one did better in Zane Middle School's microclimate. Dwarf Oregon grape was chosen for its colorful flowers.[8] Huckleberry was planted behind the Oregon grape to provide color contrast and due to that level of shade provided by the existing trees in the back of the landscape.[2] 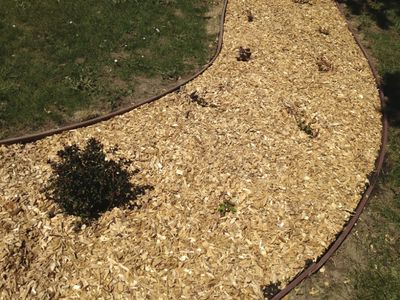 The last berry bed is on the north side of the garden fence, containing 12 blueberries, 2 himrod grapes, 1 interlaken grape, 3 yerba buena, and 3 checkerbloom, as shown in figure-4. Blueberry was chosen and planted in such large numbers because it is a berry most students already know and feel comfortable eating. It is placed closer to the rainwater catchment system because they may need more water than the other species when first being established.[6]Himrod[9] and Interlaken[10] grapes were chosen to help add some beauty to the bare metal fence they will grow on.Yerba Buena[11] and checkerbloom[12] were chosen as a native groundcover to showcase edible leaves. 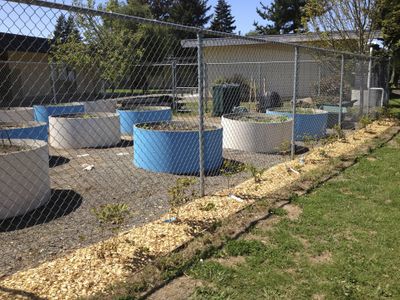 There are three trees north of the blueberry bed in a triangular shape. The last two trees are bordering the right side of the Rainbow Walkway. Two peach trees were chosen for their delicious flavor and the Frost variety was chosen because it is known to do well this close to the coast.[6] Two varieties of apple tree were spaced apart from one another to reduce the chance of a disease possibly affecting both of them.[13] The Asian pear tree provides extra variety into the garden. Figure-5 shows a peach tree and figure-6 a pear tree.[14]

Below is Table-2 which shows the costs of materials purchased to implement The Rainbow Walkway. The table breaks down the quantity of each item purchased as well as the retail cost and the amount paid by the group. Thanks to local businesses, Wes Green Landscape Materials, Miller Farms Nursery, Lost Foods Native Plant Nursery and Pierson Building Center, the net cost was decreased by more than a total of $350 dollars.

The pie chart below shows the total amount of time in hours spent on the project by the Team Seedling team members. It is divided into 5 parts, each representing a different phase in the project. 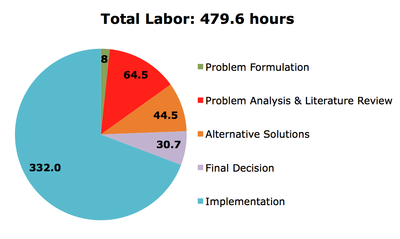 In the following table the estimated amount of time is shown for each task related to maintaining the landscaping. The grounds keepers workload will increase by an estimated 15 minutes due to more obstacles to mow around and the rest of the maintenance will be done by volunteers and teachers. The total cost of maintenance is $17.57 for a box of fertilizer per year and the extra amount of gas necessary.

The result is a beautiful, low maintenance landscape at Zane Middle School filled with a variety of delicious edibles. It has informational pamphlets, for community education, and accompanying curriculum, to ensure student involvement and education.

When creating your own edible landscape, it is important to follow every step listed.

Once The Rainbow Walkway was chosen obstacles slowly started popping up and caused for change in the design. The original design had the open side of the rainbow facing North West and created a sad face with the two trees on the right hand side. The direction of the bed had to be changed because vehicles needed to be able to access the entrance to the garden. After this change had been made the concern of breaking fire regulations arose. The peach tree on the left side of the bed would have to be moved to make the back of the building accessible for fire fighters. Luckily after a month, it was determined that the tree was not breaking code and would not have to be moved. Thanks to donations, twelve blueberry plants could be added along the fence creating an entire bed rather than just three vines. 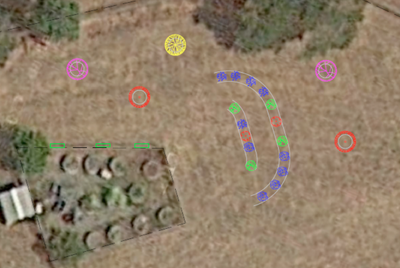 Now that The Rainbow Walkway has been implemented all there is left to do is wait for the plants to grow. As the plants begin to fruit and spread, it is up to the school and its volunteers to keep the plants thriving.

Since the panorama picture at the top was taken, a few things have changed at this edible landscape. Near the bench, which was donated to the middle school, there is a new wooden post made from re-claimed wood which contained brochures about the edible landscape. The brochure contains information on some of the species of plants there, when they are ripe, a blueberry jam recipe, a "how to" guide on creating your own edible landscaping, and a summary on what it is. A picture of the brochure is located below. (Note: The picture of the brochure is black and white because we got a copy from Trevor because we did not want to waste one of their color copies). Some species that are here include: chilean guava, wild strawberries, liberty apples, evergreen huckleberry, blueberries and Oregon grapes. Trevor Hammons, a counselor at the middle school, told us that the whole project was less than $100 total because much of the materials had been donated. The Zane Middle School rainwater catchment system supplies all the water needed to water the plants, creating a self-sustained edible landscape.

The plants have grown and there have been a small number of issues or problems with the landscape project. Two signs had been stolen and an animal mauled one of the peach trees. The school counselor also noted there was a small concern about the wood chips and students possibly throwing them at each other, but there has not been an issue of the sort to date. Another minor issue is maintenance since there is no maintenance crew on this campus, so all the watering and weeding has to be done by the students, faculty or staff at the school. However, Trevor informed us that this is not a big issue because the students are able to learn more about gardening and responsibility.