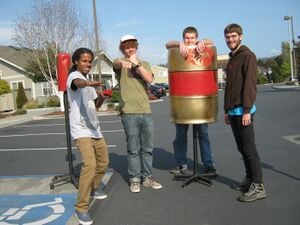 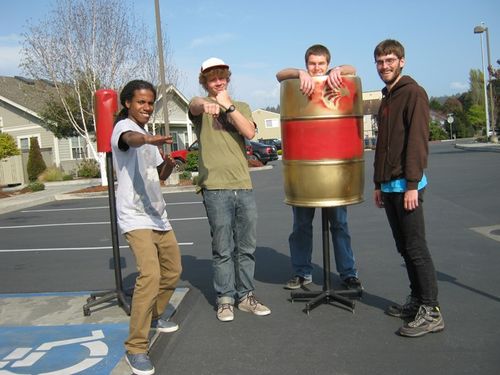 The objective of Team Falcon Punch is to create an upcycled disc golf course for the students at Zane Middle school physical education class as well for intermural tournaments. The disc golf course is to be made from weather-proof and recycled materials that can withstand the stress of being handled by students. In order to conduct this project, the process was broken down into five sections: Problem Formulation,Literature Review, Alternate Solution, Discussing Review, and Specification of Final Solution. As a result, a nine hole disc golf course was built from upcycled materials.

In the Fall semester course of Engineering 215 Intro to Design from Cal Poly Humboldt, we were contracted to build a 9 hole up cycle disc course for Zane Middle School, which is a public middle school located in Eureka, CA. Zane Middle School is committed to inspiring academic Excellence, Creativity, and the confidence to Succeed. Zane Middle School is a S.T.E.A.M school, which is an institution with a curriculum heavily invested in Science, Technology, Engineering, Art, and Mathematics. The members of the team consisted of: Ray Endicott, Jeremy Fischer, Frank Heggeness, Jabi Skyers. 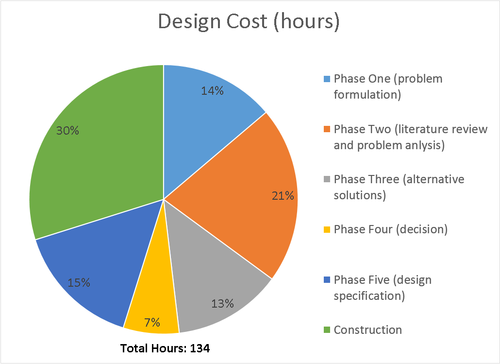 The final design of our project is a combination of three 55-gallon polyethylene drum designs and six stainless steel fire extinguisher designs. The Stationary Safety Goal is a portable and resilient solution created mostly from recycled materials and very few parts that can be damaged easily. The fire extinguisher in the design was replaced with a fifty five gallon drum for some of the goals. The poly-ethylene barrels provide a comparable replacement for the fire extinguisher. While lacking the "bell" sound requested by the client, they do create a larger target for the younger children. All the goals closely resemble the height of a regulation basket, although the fire extinguishers provide a smaller target zone.

To determine the amount of sound the Stationary Safety Goal generated, we tested how loud it was when it is impacted by a disc. When testing the loudness of the prototype, discs were thrown at the goal across a field as if the game was being played. It was found that it was very sturdy with wind up to ten miles per hour hitting the goal. The sound the client asked for is created when the goal is hit from any angle by a disc. This is a successful way to confirm that a goal has been scored. After testing, Team Falcon Punch delivered the disc golf holes to Zane Middle School where students participated in playing disc golf during P.E. The students really enjoyed playing disc golf while using Team Falcon Punch's targets, and expressed their gratitude to the team. Many of the students particularly enjoyed the auditory affirmation that the goals provided when struck by a disc. Overall the testing was a success and the goals will be used for intramural and physical educational purposes at Zane Middle School. 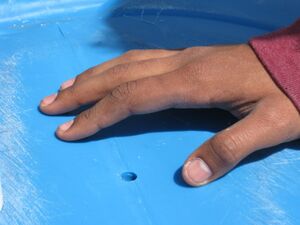 Caption
Put 3/8 inch hole in cap, "top" of drum. The length of this screw must be big enough to go through the cap, a nut, and the drum with enough room left to be screwed on by a wing nut.
2 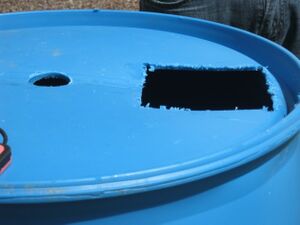 Caption
Cut hole in "bottom" of drum that will fit the PVC pipe that will be used for each goal. This is the left hole shown in the picture below. Also cut a hole big enough to fit your hand into. This hole is shown on the right in the picture to the left.
3 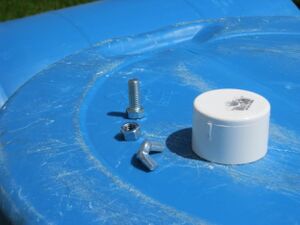 Caption
Put 3/8 inch hole through cap and attach hex nut to the bolt. This will sandwich the cap holding it in place. The wing nut will be attached later on.
4 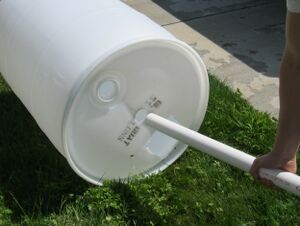 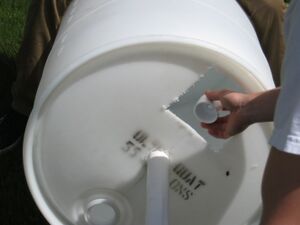 Caption
Attach the cap without the wing nut by using the enlarged hole created earlier.
6 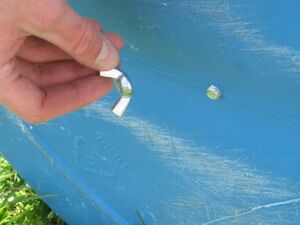 Caption
Stick the PVC-cap combo all the way to the end of the drum and outside the 3/8 inch hole created earlier. Attach the wing nut to the bolt going through the barrel and screw on tightly.

After testing, we found that plastic barrels and fire extinguishers made the best sounds when hit, and were also lightweight. We found that the goals were easy to assemble and disassemble. Due to the large number of goals built, it is best utilized with large groups of students. The next course of action for Zane Middle School could be to build another 9 disc golf holes, thus creating a full 18 hole course.

Zane Middle School was very pleased with the up-cycle disc golf course. The students and faculty were excited to receive and use the course.

How to Assemble (Video)[edit | edit source]