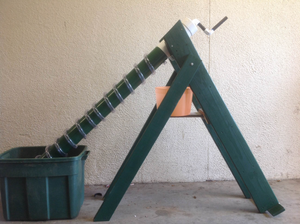 The objective of this project is to construct a device that aids the students of Zane Middle School in Eureka, California in the understanding of how civilizations moved water throughout the centuries. Through participating in the Engr215 Introduction to Design course at Cal Poly Humboldt and the University's partnership with Zane Middle School, a team referred to as The Amenders, shown in Figure 1, was born. By a process of trial and error, we have found that a model of an Archimedes Screw serves as a useful teaching aid. The Archimedes Screw instilled a curiosity among students that left them eager to learn more. 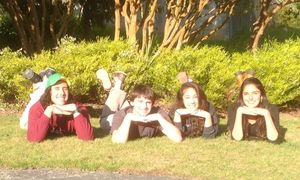 The objective of this project was to build a device that demonstrates how water is transported between two target reservoirs. The Amenders designed an Archimedes Screw that moves water from a low reservoir to a higher reservoir located 3 feet above the ground. The design criteria given by the client, Joan Crandell, are listed in Table 1.

The device being implemented is modeled after an Archimedes Screw. An Archimedes screw is a device used to transport water from a low elevation to a higher elevation. By using this model, students will be able to observe water ascending through the spiral tubes as they rotate the handle. The design consists of three main parts: the Archimedes Screw, the frame to support the screw, and two reservoirs for containing water.

The following figure and tables address the materials used to build the Archimedes Screw Pump, associated costs, design time in hours, and estimated maintenance cost in hours in Figure 3, Table 2, and Table 3, respectively. 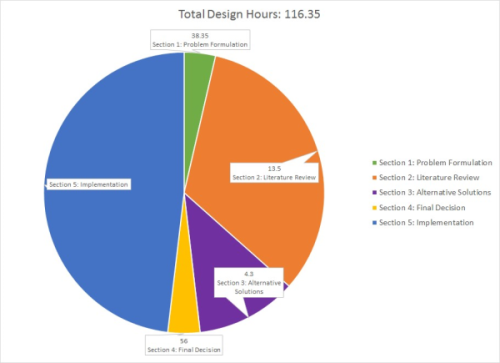 Shown below are the various components of the Archimedes Screw Pump. Some components are depicted to show how they will fit together.

The Archimedes Screw successfully transports water from an elevation of approximately 3 feet. The next step is for Joan Crandell to utilize the device in her classroom at Zane Middle School. During the final decision process the outcome of the Delphi matrix lead to a final design that was entirely different than the Archimedes Screw Pump presented above. Originally our team wanted to combine multiple water moving devices to offer many different ways of moving water. It was our participation in Zane Middle School's fist annual Galileo Day that changed this. The students at Zane's Galileo Day interacted with the prototypes and the feedback that was given strongly suggested that the students were much more inspired and interested by the screws than any of the other devices. Additionally, it was apparently obvious that the level of durability was going to require some great improvements. From this great opportunity given to us by Zane Middle School and Zane faculty, Galileo Day marked the birth of an entirely new and improved final design; a larger Archimedes Screw Pump, capable of moving larger amounts of water that will hold up for years of extensive usage to come.