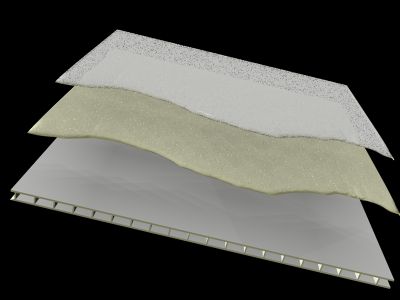 Titanium Sun shield is a primer and topcoat application over the polypropylene exterior of a WorldShelters temporary structure. The plastic sheeting makes adhesion difficult, so a primer is used and the purpose of applying a topcoat is to protect the plastic from ultraviolet radiation.

World Shelters is a not-for-profit volunteer organization that designs, manufactures, delivers, and assembles temporary shelters for both emergency and long-term humanitarian needs. The shelters are made of corrugated polypropylene sheets that are safe, durable and simple to transport and assemble. The structures last an average of three years, as ultraviolet radiation from the sun degrades the polypropylene. The HSU Spring 2010 Engr215 Introduction to Design class worked together with World Shelters to improve the designs of their emergency shelters.

The polypropylene structures used by World Shelters in emergency situation are degraded by ultraviolet radiation. The objective of this project is to extend the lifespan of the polypropylene shelters.

Client criteria shown below in Table 1 are qualitative and quantitative parameters used to evaluate possible solutions. PickUpStix Engineering and the client World Shelters have collaborated to develop solution criteria. In 2009, after two years of exposure, a model U-Dome structure built by World Shelters in Arcata, California collapsed in a windstorm. Analysis of the polypropylene showed cracking of the material along the seams where it is scored with a knife and then bent to form the panels that make up the structure. The failure of the PP material that caused the ultimate collapse of the structure occurred where the fasteners that puncture two overlapping panels to give the structure rigidity, tore through the PP. Visual examination by World Shelters showed that the PP material cracked where the failure occurred instead of stretching, as is the normal reaction of polymeric materials under stress at normal temperatures. The cracking is evidence of UV degradation of PP. World Shelters has since changed manufacturers and the PP now used includes an additive that has a manufacturer warranty against UV degradation for ten years (Armand Mullin, personal email communication, April 15, 2010).

Titanium Sun Shield is the final solution for the protection of World Shelters' polypropylene shelters against ultraviolet radiation from the Sun. Titanium dioxide rutile is used as an opaque white paint pigment that acts to refract UV radiation from the Sun, preventing the radiation from degrading the PP. The PP material must first be cleaned; an oil-based primer is then applied creating a surface to which the topcoat of paint may adhere securely. The topcoat paint is a water-based and contains the bulk of the TiO2 pigment, though some TiO2 is also in the primer.

Design costs in hours are shown in the following figure, which is an estimated value of the work done. These estimated values are dated as of April 28, 2010, the total cost in working hours for the design project is 407 hours. The percentages shown on the pie chart are the amount of hours that were put into this project. 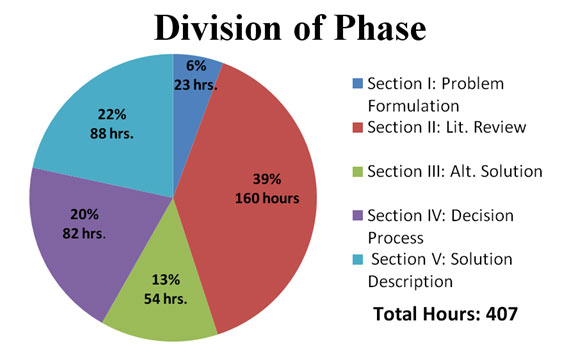 Materials for the Titanium Sun Shield are as follows in the table below. These prices do not include sales tax. The total cost of testing materials is $38.11. Detailed costs for our solution are given below in following table. The amount of paint needed to coat the U-Dome is estimated to be one gallon of primer and one gallon of top-coat paint, totaling $100. The total projected cost including materials is $112 per U-Dome.

To maximize the life span of the PP, you must maintain it by applying the paint. The maintenance consists of cleaning off any dust particles or dirt on the PP, as well as applying paint to the exterior of the shelter. Detailed maintenance costs in terms of hours are shown in the table below.

Maintenance and operation costs in time.