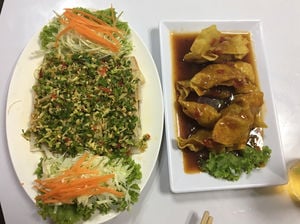 Wide-spread vegetarianism in Western cultures is a fairly new phenomenon, though not without ancient precedents. In many Asian cultures vegetarianism has been established for centuries. The culinary and cultural aspects of vegetarianism may be considered to be more deeply developed in some Asian cultures. However, maintaining a vegetarian lifestyle presents challenges for national and foreign visitors alike.

Seafood plays a large role in many national cuisines, particularly Japanese, Korean, Vietnamese and Thai. Meat consumption is closely linked with high incomes, thus as Asian countries have modernized meat consumption his risen. Although opinions differ between different schools and traditions, advocacy for vegetarianism is closely associated with Buddhism and other religions. Thus vegetarian restaurants in many Asian cities can often be found in proximity to temples. 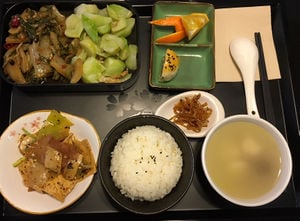 Through most of Chinese history meat has been considered a luxury. Due to high population, grain and vegetable production often had a greater focus in agricultural production, and formed the majority of food consumed in the country. The China–Cornell–Oxford Project ("China study"), conducted in 1980-81, recorded the "diets, lifestyle, and disease characteristics of 6,500 people in 65 rural Chinese counties."[1] Interpretations of the data by T. Colin Campbell of Cornell Univ. found that lower consumption of animal products correlated with lower mortality rates and other health indicators. Since that time, China has rapidly developed into a modern industrial society. Higher household incomes have lead to higher consumption of meat. From 1982 to 2016 the average consumer went from eating 13kg to 63kg of meat per year.[2] China thus accounts for 28% of the world's meat consumption and half of it's pork consumption.

Many Chinese, particularly younger urbanites, are bucking this trend by embracing vegetarianism. Vegetarian lifestyles in China are closely associated with Buddhism and Daoism, and practiced by both clergy and laypeople. Vegetarianism is generally not considered mandatory by various religious schools, but may be more strongly encouraged in some than others. Many Buddhists also do not consume eggs due to their role in reproduction. Some schools also discourage the consumption of pungent/ aromatic vegetables similar to the the sattvic diet. As in other cultures, there are also many non-religious individuals that practice vegetarianism on ethical or other grounds.

At first, living as a vegetarian in China may seem intimidating. Despite the ancient tradition of vegetarianism in China, many Chinese do not understand the concept or reasons behind this diet. Small-scale restaurateurs or food vendors may not understand a customer's request to exclude all meat from a dish. It is not uncommon to have to send dishes back because it includes mince meat. Many dishes are cooked in animal fat or fish sauce. Chinese meals typically include several dishes, most of which include a mix of vegetables and meat. Vegetarians in China often choose to eat around the meat or make certain exceptions for practicality's sake. Vegetarian restaurants are common in major cities, but may not have convenient locations or opening hours.

Many popular dishes can be easily adapted for vegetarians. Tomato and egg (番茄鸡蛋, fānqíejīdàn) is cheap, easy-to-prepare, and popular all around China. It can be served plain, over rice or noodles, or as a soup. Buddha's delight (罗汉斋, luóhàn zhāi) is probably the internationally best-known vegetarian Chinese dish, but of limited availability in some regions. Fish-flavored eggplant (鱼香茄子, yúxiāng qiézi), despite the name, contains no seafood and is vegetarian by default.

Tofu (豆腐, dòufu) has been produced since at least the Han dynasty (ca. 2000 years ago), and is a common ingredient in many Chinese dishes. Many more varieties of tofu are available in China than the white "silken tofu" commonly available in western countries. The tougher texture of pressed tofu (豆腐干, dòufugān) makes it an appropriate meat substitute in many Chinese dishes. Mápó dòufu (麻婆豆腐) is a popular spicy tofu dish which can be prepared without the typically-included minced pork.

Vegetarianism is perhaps nowhere as well-established as in India. 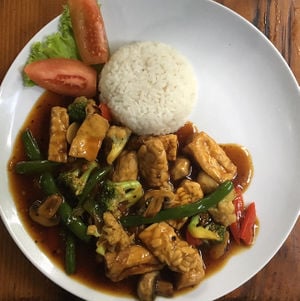 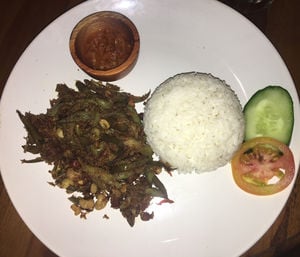 Japanese cuisine is well-known for it's seafood dishes. It can be difficult to find food that contains absolutely no animal products, particularly fish stock (dashi). Temple food (shojin ryori) is fully vegan. The typically vegetarian/vegan macrobiotic diet was first developed in Japan.

As a peninsular country, seafood is an important part of Korean cuisine. Many dishes are typically prepared with fish or shrimp sauce, particularly the staple kimchi (김치). Meat-heavy meals such as barbecue, fried chicken or raw meat/ fish (회, hwe) are popular. However, a few vegetarian dishes can be readily found. Kimbap (김밥, "Korean sushi rolls") are usually prepared with canned meat (Spam), and sometimes with beef bulgogi (불고기) or eggs any of which can be excluded. Bibimbap (비빔밥) typically comes with egg and may come with meat, which can be excluded. Naengmyeon (냉면, iced noodles) may be made with vegetable stock instead of meat stock. Vegetable dumplings (소만두, so mandu; 납짝만두, nabjjak mandu are available at many grocery stores. 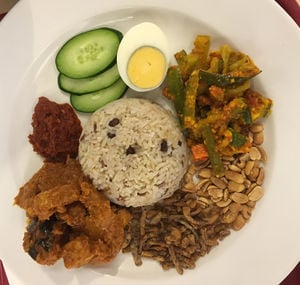 The Malay peninsula has been an important focal point in world trade for centuries. As different waves of people settled there -- Orang Asli, Malay, Thai, Chinese and Indian -- they brought their foodways with them, giving modern Malaysia a richly diverse culinary heritage. As with other countries in the region, rice and noodles are staples, and seafood plays an important role. As a majority Muslim country, pork plays a lesser role and many restaurants prominently display whether or not they are certified halal. Over the generations Straits Chinese culture became influenced by Malay culture, which gave rise to the fusion nyonya cuisine. Vegetarian versions of the various ethnic cuisines are easy to come by in Kuala Lumpur and Penang. Outside of the major cities it becomes rather more difficult, except in Indian restaurants. 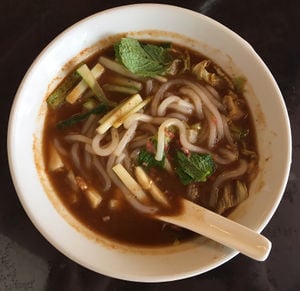 The unofficial national dish nasi lemak is composed of 5-6 parts: rice cooked in coconut milk, cucumber slices, roasted peanuts, sambal (chili sauce), and fried anchovies, typically accompanied with a piece of fried chicken. Vegetarian restaurants use mock anchovies and may serve fried tofu or vegetable curry in place of chicken. Non-vegetarian restaurants are often willing to serve the dish without meat or seafood, however be advised that sambal may be made with shrimp or fish. Laksa, a rice noodle soup dish, has several regional and ethnic variations. The most common versions have a tamarind or coconut soup base. It may be served with shrimp or chicken, but can be made with tofu instead. 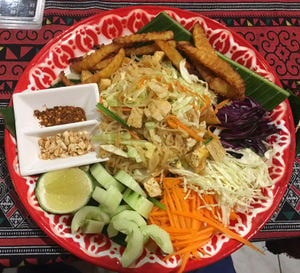 Relative to many other ethnic cuisines, Thai food offers a wide array of dishes based on fresh vegetables. Although fish sauce, shrimp, and pork are common in Thai cooking, they can usually be excluded with little trouble.

Page data
Retrieved from "https://www.appropedia.org/w/index.php?title=Vegetarianism_in_Asia&oldid=656245"
Cookies help us deliver our services. By using our services, you agree to our use of cookies.
Categories:
About Appropedia · Policies · Contact · Content is available under CC-BY-SA-4.0 unless otherwise noted.