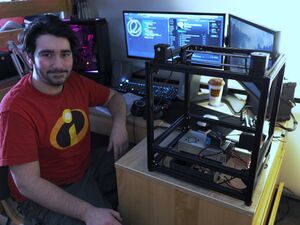 Hello! My name is Wilson Holmes and I am a Senior Computer Engineering Undergraduate student at Michigan Technological University. I am love the snow/winter and am also very passionate about Linux, robotics, computers, and programming. Currently I am working with Dr. Joshua M. Pearce in the MTU MOST lab on open source bioreactors!

I am from the Grand Traverse area in lower Michigan. I currently go to school at Michigan Technological University and am working on my undergraduate degree in Computer Engineering. I am planning on continuing to get my masters as well. I previously worked at Verified Path Machining where I used CAD and operated CNC lathes. I love the Keweenaw, skiing and snowboarding, robotics, and programming.

Building a 3D printer with a core-xy motion platform, and a direct drive extruder (E3D Hemera). Runs on 8-bit electronics based on an Arduino Mega 2560 and a RAMPS 1.4 board.

This semester I worked on the front and back end of a web app for the Growbot project. Here is a link to the OSHE GitHub V1 branch. The main goal for the semester (for the website) was to get sensor data from the robot to be graphed on a page of the website. This was accomplished using python3, the Flask framework for python, Flask-Admin, Bootstrap 4 classes, graph.js, a SQLite3 database, the peewee object relation mapper for SQLite, and many other software tools. By the end of the semester, the website was capable of dynamically graphing all data stored in the database, as well as displaying a webcam stream from the robot. There are also conveniently placed links on the website that will take the user to the Appropedia Standard Operating Procedures (SOP) page with a tutorial on how to add new sensors to the Growbot, as well as how to start up the web server correctly. This included mini tutorials of all of the software tools I had used throughout the semester so that hopefully this project can easily be taken over/understood by future teams/people. In addition to the SOP page, I also provided a full installation guide on the Firmware Installation page. Because of the use of Bootstrap classes, I was able to make the website have full functionality and correct styling for both mobile and desktop devices.

I also implemented a data management system for the Growbot's database, that everyday (1 am) saves the database tables to .csv files, and clears the database, and sends an email with those CSV files to the user. Using Flask-Admin allowed me to give the users an option to view the database (Individual tables and specific contents) right on the website. Eliminating the need for copying the database file over sshfs to the users main computer.

During my Fall 2020 semester on the Growbot project I was software lead of the team and worked on configuring and programming the open source motor controller, ODrive v3.6. The main goal for the semester was to get the robot physically moving and autonomous functions developed. By the end of the semester, the robot was able to be controlled through a python curses Terminal User Interface (TUI), the ODrive configuration procedure/parameters were recorded in odriveCommands.txt for future students to reference, and rudimentary wire following was implemented. This was accomplished with the use of an Adafruit Analog to Digital Converter (ADC) and an inductor-circuit combo that can be found here at robotshop.com. To see a snapshot of this semester's software progress I will refer you to the OSHE GitHub V2 branch for the "OSHE_Growbot" repository.

So far, all of the programming that I have done in the enterprise has been in python. This includes the Terminal User Interface to a remote control program for the Growbot, the test files for the Adafruit ADC, and the rudimentary wire following code. Even odrivetool, a terminal shell for the ODrive is remarkably similar to the python shell. As for wire following, for the current set-up there is no feedback control loop in place for the robot (no PID) so it is directly driven by the values coming from the inductor circuit and to the ADC. This is something that can be worked on in future semesters when hopefully in-person collaboration is available again.

During the Spring 2021 semester on the Growbot project, I was again software lead of the team and worked on implementing wire following on the robot. The main goal for the semester's software progress was to get the robot following a wire on the ground, and by the end of the semester I was able to accomplish this. By using the two inductors on the robot in combination with their OP-amp circuit and the Adafruit ADC connected to the Raspberry Pi I was able to get the robot to follow a wire and also fail safely if the robot lost track of the wire. I have included several videos below to show the differences in implementation between the beginning of the semester, the first proof of concept test, the first true successful test on the ground (as well as an example failure), and then the final revision which while more reliable, also has an auto-stop when the robot has lost track of the wire. The current wire following code can be seen here, but to see a snapshot of this semester's entire software progress, see the OSHE GitHub V3 branch. In one of the below videos I describe the wire following version as "tic-tac", and by that I mean that neither inductor is intended to sense the wire at all times. The robot continues to drive forward when it "sees" nothing on either inductor, but will then begin to correct with a speed that is a factor of the strength of the signal being read from either inductor. That way the robot should be able to react more or less aggressively depending on how off course it is.

The robot would simply set the speed of the motors to a scaled value of the ADC's inductor readings.

Robot following wire, this was our first successful attempt, but the robot was too aggressive in its corrections.

Robot failing to follow the wire due to too aggressive movements.

Robot following wire and stopping when it has lost the wire.

I also made some improvements to the remote control code from last semester. There was a way to control the speed of the robot by pressing `f` to increment the motor speed up by 0.25 turns/sec and `s` to decrement the speed by 0.25 turns/sec. This however, was not visible to the user anywhere in the TUI. So I added instructions to the terminal window explaining this (and the rest of the functionality of the program) so that the user would be aware. I also added a speed readout on the top so that the user would not have to guess how fast the robot was set to move at. That code can be found here. I also added an entry to the cron table on the Raspberry Pi that would run a bash script to then run a python program to check the battery level of the robot, eventually this code will be adapted to instead tell the robot when it needs to go back to the charging base, but for now it is simply a safe guard to shutdown the Raspberry Pi if the battery is too low as to not over-discharge the LiPo battery, which ruins the battery, as well as making it a safety hazard if recharged from that overly-discharged state. 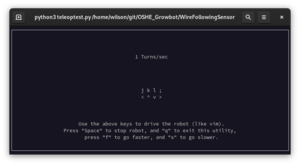 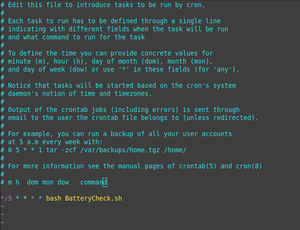 Screenshot of the crontab on the Raspberry Pi meant to check the battery level every five minutes.
Battery checking/auto-shutoff script

This is the script intended to be run every 5 minutes by the cron table defined cron job to check the voltage of the battery and react accordingly.