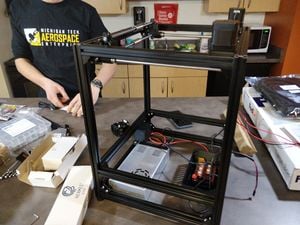 I have wanted to get a 3D printer since I 3D printed in my junior year of high school. One of the main goals I had in creating this printer was to have a machine that was capable of printing flexible filament well. I decided on building my own (rather than just buying one), because I determined after some research and talking to others that it would be more cost effective to build a printer to my wanted specifications than to buy another printer off the market and retrofit it with the necessary parts to print flexibles as I was wanting it to do.

The x and y axis use a belt system called "CoreXY" online. It is a Cartesian motion 3D printer based off of the FuseBox2 CoreXY printer on Thingiverse. I intend to use Marlin 2.0 as my firmware.

Coming soon I wish to update the BOM provided when I started with the parts that I used.

I still have more assembly to do, and I wish to keep updating this page until the design and assembly are final (or as close to that it can be).

No conclusions yet, however in the meantime, I would like to note that I have been having a blast putting this all together.