On lower altitudes above the soil, VAWT's (vertical axis wind turbines) are more efficient than HAWTs. Several types exist including Panemone, Savonius, Darrieus and Variable geometry HAWT's. Their efficiency can be read at following articles:

VAWT harvesters design is different from what people most associate with wind turbines. They are set up where the "main rotor shaft is set traverse to the wind while the main components are located at the base of the turbine.". This makes it so the generator and the gearbox are closer to the ground so that they are easier to maintain and operate.

On higher altitudes above the soil, HAWT's (horizontal axis wind turbines) are more efficient than VAWTs.

A basic HAWT wind harvester is composed of the following components:[1]

A regular HAWT wind turbine comes with a tower at least 30 feet above obstructions. To power a regular family house a 30 metre high tower is even recommended with blades spanning 5 meters in diameter (see Domestic energy consumption). There are two basic types of towers useful for residential wind power systems (free standing and guyed). Free standing towers are self supporting and are usually heavier which means they take special equipment (cranes) to place them. Guyed towers are supported on a concrete base and anchored by wires for support. They typically are not as heavy and most manufacturer's produce tilt down models which may be easily raised and lowered for maintenance.

The kinetic (moving energy) from the winds is harnessed by a device known as the turbine. This turbine contains airfoils (blades) that capture the energy of the wind and use it to turn the shaft of an alternator (like you have on a car only bigger).

There are 2 basic kinds of blades (drag style and lifting style). We all have seen pictures of groundsailor windmills and these are a good example of the drag style of airfoil. Lifting style blades are twisted instead of flat and resemble the propellor of a small airplane.

A HAWT turbine is classified as to whether the wind strikes the blades or the tower first. A vertical turbine typically requires less land for it's installation and is a better option for the more urban areas on the planet. An upwind turbine is created for the wind to impact the airfoils before it does the tower.

These units normally have a tail on the turbine which is required to maintain the unit pointed into the wind. A downwind turbine doesn't need a tail as the wind acting on the blades tends to keep it oriented properly.

These turbine systems would be damaged if they were to be allowed to turn at excessive speeds. Therefore, units should have automatic over-speed governing systems. Some systems use electrical braking systems although some use mechanical type brakes.

The output electricity from the alternator is sent to a controller which conditions it for use in the home. The usage of residential wind power systems requires the home to either remain linked with the utility grid or store electricity in a battery for use when the wind doesn't blow sufficiently.

Also note that unconventional HAWT wind turbine designs also exist. Some designs (such as the bladeless wind turbine) may be even much more efficient, yet may be more difficult and more expensive to make. 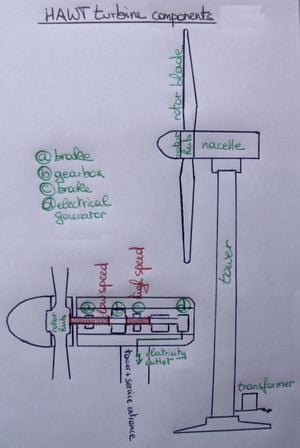 Large horizontal axis wind turbines are generally equipped with a gearbox to improve efficiency. This however also complicates the design considerably, and makes it more costly.

Regardless of the type of wind turbine used, the optimal power output is not obtained in practice at wind speeds above or below what the wind turbine was designed for. This is due to the alternator or dynamo used, which tends to be chosen for a specific wind speed. If the wind speed goes above or below this speed, the efficiency is much lower than what could actually be harvested at this time.

Solutions to these problems are:

Gearboxes are the most efficient solution since they allow the turbine to use all available wind energy. However, the downside (and the reason why gearboxes are almost never used, especially not with small-scale wind turbines -they tend to make use of gear reducers or gear increasers instead-) is that they tend to make the wind turbine complex and expensive. This, as a PCB connected to a wind speed meter needs to be present to measure the wind speed, and then change the gears accordingly, so that the alternator may keep rotating at its optimal RPM.

Furling systems do things differently; rather than taking advantage of all wind energy, they just make the turbine blades capture less wind energy, so that the rotor remains rotating at a same RPM. Variable pitch blades do this by changing the angle of attack of the airfoils (blades); tail furling rotate the wind turbine's head away horizontally; tilt-back furling does the same but than in the vertical direction, and blade flexing twists the blades.

Another problem with wind turbines is that, when the site has been poorly chosen, and turbulence (non-laminar air flow) is present (due to obstacles as trees, houses, ... in the vicinity), the turbine's head tends to rotate left to right and vice versa and this constantly. the result is that very little of the wind power can actually be captured by the blades. The best solution is to just pick your site carefully (so that it's turbulence-free). Alternatively, a system that has solenoid-activated pins (which are mostly activated, yet deactivate every 10 minutes or so to allow the head to reposition itself as the wind has turned by many degrees) may prove to be a solution.

Page data
Retrieved from "https://www.appropedia.org/w/index.php?title=Types_of_wind_turbines&oldid=650042"
Cookies help us deliver our services. By using our services, you agree to our use of cookies.
Category:
Maintenance categories:
About Appropedia · Policies · Contact · Content is available under CC-BY-SA-4.0 unless otherwise noted.