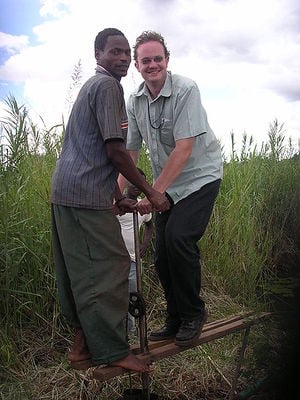 A treadle pump being demonstrated in Malawi.

A treadle pump is a human-powered Pump designed to lift water from a depth of seven meters or less. A treadleW is a lever device pressed by the foot to drive a machine, in this case a pump. The treadle pump can do most of the work of a motorized pump, but costs considerably less (75%) to purchase. Because it needs no fossil fuel (it is driven by the operator's body weight and leg muscles, it can also cost less (50%) to operate than a motorized pump. It can lift five to seven cubic meters of water per hour from wells and boreholesW up to seven meters deep and can also be used to draw water from water sources such as lakes and rivers. Many treadle pumps are manufactured locally, but they can be challenging to produce consistently without highly skilled welders and production hardware.

Many NGOs (IDEW, KickStartW, Practical Action, IDEI ) have been active in developing and promoting treadle pumps, as well as student and researcher teams at universities.