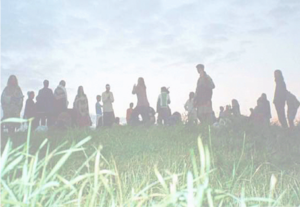 Ting is a gathering that initially was started as a way for eco-activists and anarchists to talk about practical action in the Nordic countries. Gatherings happen in the Winter and Summer in different Nordic Countries. 2010 Summer gathering was in Finland, with events occurring each summer and winter since 1979. After coming under influence from the Rainbow family, the activist aspect has lessened. Instead there is more experiential learning on how to live in a low impact, community solidarity fashion.

Food tends to be vegan and there is collective cooking. Decisions are made in consensus circles and there are several workshops during a gathering. Nothing is compulsory, although drugs (including tobacco and alcohol are discouraged).

Nordisk Tingmøde has no "Rules" and no "Leaders" and nobody can speak on behavior of a Nordisk Tingmøde. So this is Sune's thoughts now, take them, use them or forget them.

If we see Rainbow as a meeting of Tribes, then Nordisk Tingmøde is a meeting for the Nordic Tribe.

My feeling in "the old days" was, that Nordisk Tingmøde is people coming down from the Mountains, out from the Forests, from places where they feel kind of alone, even lonely – and meeting similar people, creating happiness to see that We Are Not The Only One, enjoying the creation of family, for some weeks, before returning to daily life amongst scared ignorant unaware greedy etc. members of the local society, and filled with the warm Ting-Spirit working to unfreeze the neighbors Hearts, making small revolutions where possible – or at least survive keeping happiness well functional, until next gathering…

Today is it still the same, with the difference that now a lot of people also comes out of the towns. And people today increasingly want to create "Ting"-life together in their daily activities - Ecovillages, Collectives or however it may be possible.

Nordisk Tingmøde is local – not universal. It is hold in the Nordic countries (Denmark, Sweden, Norway, Finland and occasional Iceland). The common language was "Scandinavian", but is changed to English (because of difficulties with Finnish). There should be local/regional gatherings everywhere in this World. This is the place to meet friends that we will meet again and again, and that we will work, talk, meet also between the gatherings. It is the place to meet yourself, by reflections from the personal meetings and the "family", where you (more or less) know everybody, after the first week. This is the place for the "personal" revolutions. Some Nordic Ting people join Rainsbow-gatherings, but only a few – this may change this year in Finland, where it is easy to go from Ting to Rainbow.

The gatherings are small, 120-200 people, though thousands have participated during the more than 30 years, since the first one in Thylejren in 1979. There have always been a few "not-Nordic" people, but only people somehow related to and familiar with the Nordic (and of course some occasional visitors).

Nordisk Tingmøde is a winterTing and a summerTing. In the beginning the winter-Ting was a (mostly) national meeting, to prepare the Nordic summer-Ting, but it is now changed into a also Nordic Tingmeeting, during Christmas and New Year, very cosy and often quite crowded because of the (mostly) very limited indoor-facilities. WinterTing may be even less published, because there may be physical limitations. This winter was very nice, in Finland with minus 35 degrees and fantastic space for up to 150 (over 200 passed by), but it is unique to have this indoor space, at least as seen from small Denmark, hehe ;-)

Nordisk Tingmøde is never published, - especially after one year when it was (mistakenly) published – and it turned into some kind of festival summer holiday…

There is an open part of Tingets.net and a closed part. The login is only given mouth-to-mouth, and the information about the Gatherings should never be published – there is consensus on this.

If you find no information, it may also because there is none (for example the confirmation of the TingPlace came yesterday…).

Not to publish the Gatherings is not the same as not to publish "Ting-life". I feel very nice when People are getting inspired by telling about my (Ting)Life, and this is a good way to spread the Peace, Love & Understanding. Inspiration to make more gatherings, local and in other circles.

If we see Nordisk Tingmøde as a meeting of People, then every Person is an ambassador for Ting-Life.

Nordisk Tingmøde is No Drugs (no cannabis, no alcohol, no nothing, You Know!), and no Electrical Music! This is for sure. And no Dogs (accepted if in lines and kept in very outside of camp). And no common meat (sometimes accepted, after long discussions and with special conditions, and only in special occasions). And no electrical devices in common space (noiseless mobiles kind of accepted, as well as some discrete computers for travel-bookings). Photos should not be taken including recognizable persons, without permission, and/or not published in open internet. In principle photography is not wanted – but as the photos are highly appreciated by most people (afterwards) - but this is an unsolved conclusion.

For the drugs: The last years it has been successfully starting new tradition of No Drugs. We go for Natural High! It does not mean that a few (a very few, you know who you are) claims their "rights" to do whatever they feel for, including smoking cannabis. It means, that when those few personalities, with their ego based on this behavior, does it have effects and leads to discussions, both personal and eventually in the Circle.

It is not only a matter of principles.

It is very difficult for some people to see other people smoking, without wanting to smoke themselves. It is part of the nature of drugs. So just one person smoking, will cause other people to do the same, even if they not really want.

Ting-meeting is a unique occasion to meet and develop yourself in a new spiritual way. This possibility is destroyed by using drugs. The transformations is very dependent on the seeing yourself by the reflections of Others. This reflections are destroyed by their use of Drugs. Therefore it is Not Accepted to smoke "in the circle". It is accepted to smoke outside the common space - discrete, in the outside of the camp area – if people stay there until next day. Do not come to the common space, "happily high" on drugs. The same rule exists for alcohol of course. It is possible to use all the drugs we want all other weeks of our lives – but Ting is a pause – drugfree zone.

Already now – so much said, and we did not even mention the physical aspects, or the Children's Life, and… So there may come more circles – and we will learn again and again how to communicate and develop together ;-)

In Finland 2006 there was a (quick) circle about drugs (alcohol). It was happily solved.

In Denmark there was long circles on Electric Music (special occasion), and some Wild Rabbit (gift from neighbors), and everything went fine. Some drunk people were handled in a "personal" way, and no problem afterwards.

In Sweden there were a few brothers who did not respect NoDrugs, and they were told both personally and in the Circle, and they had difficulties accepting this. Later.. they learned, by their karma…

In Norway, there was a single(?) brother who claimed his rights to… It was told in the circle… and maybe he learned something(?) on the way to wintering in Finland.

This was indeed a long article. Merete from Denmark – and others - have made much-appreciated introductions to Nordisk Tingmeeting. They may follow in separate emails, and we may have a lot of circles about History, Future and EveryTing – see you there. For this summer I see the uniqueness as Many Ting-People will come to Rainbow. Rainbow may even want to do some things in Ting-style, now the occasion is here. The Rainbow will not come to Nordisk Tingmøde (some people will, of course).

Be aware also that Nordisk Ting is not planned for thousands, not even many hundreds, of people. The shitpits will be filled, the pots need to serve in 24hours shifts, we will need hammocks in every tree, hehe ;-)

Well – these were thoughts – maybe they are already changed after writing them – I will send this now, including all mistakes, even the ones I may recognize myself, so feel free to change what you like, as always.

Page data
Retrieved from "https://www.appropedia.org/w/index.php?title=Ting&oldid=618926"
Cookies help us deliver our services. By using our services, you agree to our use of cookies.
Categories:
About Appropedia · Policies · Contact · Content is available under CC-BY-SA-4.0 unless otherwise noted.