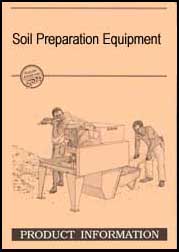 In view of the vast choice of machines and devices available, it seems difficult to decide which one should be bought. If there is not enough money to buy expensive equipment, the choice is smaller and the decision much easier. But generally, a number of points need to be considered, especially when the available resources allow for the purchase of higher priced equipment.

Since there are various categories of soil preparation equipment, the specific selection criteria of each one are described first, and are followed by aspects that are common to all.

In developing countries, the excavation of soil on a small or medium scale is preferably a manual operation, using picks, shovels, wheelbarrows, baskets, etc, as they cost the least, are labour intensive, easy to replace and can be used without special training. In large scale projects, where high outputs are essential, more efficient mechanized equipment is necessary, as described above, but they are expensive (usually imported), require only a few but well trained workers, and are not always easy to maintain and repair locally.

Mechanized equipment for soil excavation is not usually offered by suppliers of earth construction equipment. These have to be obtained from suppliers of quarrying, road building or agricultural equipment. Special transportation tools, such as conveyor belts, motorized wheelbarrows, pick-ups, front loaders, lorries, and the like, will also be needed.

Before considering the purchase of laboratory equipment for soil testing and quality control, it is advisable to investigate whether a building materials laboratory is close by. They possess the necessary equipment and expertise to carry out the tests, and if these services are available to the entrepreneur, he can save the costs of buying the equipment and training his staff. Only the instruments for daily tests need to be procured.

Manufacturers of laboratory equipment rarely produce all the apparatus needed, but generally operate as distributors of the remaining equipment. These distribution channels are sometimes very slow, on account of the specialization of the market. It is therefore advisable to contact each manufacturer separately. It is also advisable to work with companies having a local branch office or representation, that can assure sufficient follow-up.

Most of the testing equipment is produced on the basis of well-known standards, such as ASTM, AFNOR and DIN, so the variety of equipment is limited, which facilitates choice.

Pulverizers should be capable of processing both dry and humid earth without clogging the mechanism. Thus, machines in which the impact energy can be controlled (eg by variable speed) are advantageous, as this permits adaptation of the pulverizing parameters to each specific type of earth, and optimization of the end result. A further advantage would be if the machines were designed to control the maximum grain size. Generally, pulverizers must be able to produce earth in which at least 50 % of the reconstituted grains (bound by clay) have a diameter of less than 5 mm and 100 % less than 10 mm.

Jaw grinders are capable of crushing pebbles, which could be undesirable for a correct grain size distribution. Moreover, the jaws are usually designed to move apart if bigger particles threaten to jam the mechanism. When the jaws part, a large quantity of uncrushed material bypasses the system, spoiling the quality of the processed material. Such machines should only be used for very uniform types of earth.

To facilitate work, pulverizers should be designed such that a wheelbarrow can be put below the discharge opening to collect the pulverized material. The height of the feeding hopper should also be limited, in oder to allow easy access. The machine should also be equipped with an inertial system (eg pendulum, flywheel, etc).

Motorized feeding and discharge systems, as well as replaceable and/or adaptable sieves would be further advantages. For smaller, non-automatic mechanized production it is an asset for the pulverizers to be equipped with wheels. This allows moving the pulverizers along the raw material heap, rather than transporting the latter to a central processing plant.

Sieves can have two types of holes: round and square. Round holes are made by drilling through metal sheets; such sieves are therefore very sturdy, but also expensive. Sieves with square holes are made of woven wire; they are not very durable, but also not very expensive.

Sieves with round holes of a certain nominal diameter allow particles having that diameter (or less) in one direction to fall through; only its length can be greater than the diameter of the hole. The nominal size for square holes is the side of the square, and since the diagonal dimension is larger, particles having diameters greater than the nominal size can easily pass through. Therefore, the side of a square hole should be 0.8 times the diameter of around hole in order to obtain the same result in sieving.

Since sieves can get damaged, it should be possible to repair or replace them easily.

Sieve designs should also foresee direct collection of the sifted material by means of a wheelbarrow placed at the discharge opening. For smaller, non-automatic mechanized production units it is an asset for the sieves to be equipped with wheels, so that they can be moved along the raw material heap, rather than transporting the latter to a central processing plant.

Earth can contain a high proportion of abrasive particles, especially lateritic earth, which can cause rapid wear of the tank and blades. Therefore, these parts have to be made of especially resistant steel. The paddle should be shaped such that the blades penetrate the earth with the least abrasion and the most displacement of the earth.

If the use of a concrete mixer is contemplated, it must be remembered that earth is a cohesive material in the humid state, while concrete is not. Far more power is required to mix earth than to mix concrete, hence the concrete mixer must be equipped with a more powerful engine. The useful capacities of these machines indicated by the manufacturers often refer to data concerning the mixing of cement concrete, and must be reduced by half when referring to the mixing of earth.

For the production of compressed earth blocks and pise (rammed earth), ordinary tilting concrete or mortar mixers are unfit, unless used for dry mixing only. Damp earth is likely to produce conglomerate balls of earth, which is unsuitable for block production.

While the height of the feeding hopper should allow easy access for filling, the mixer design should foresee direct discharge of the mix into a wheelbarrow. Mixers should also be equipped with wheels to reduce the need for transporting raw materials or mixes to a minimum.

Of special importance with regard to production efficiency and output rate is the spatial arrangement and organization of the various working areas. Some equipment manufacturers supply complete production units with a system of machines and equipment that can be combined to form a production line, which is tailored to the user's requirements.

Special consideration should be given to the working conditions for the production team, especially with regard to operation procedures and handling of products, that is, avoidance of exceptionally hard manual work and activities that have to be done in a bent position.

Special attention should also be given to safety measures, such as avoidance of projecting moving parts, designing manual operations such that hands cannot get jammed between moving parts, clearly marking and/or protecting dangerous points, incorporating thermal fuses, security pins, etc. Automatic machines must at all cost be equipped with an emergency stop switch, which is easily accessible.

A balance must be found between the desired output rate, quality standard and level of sophistication. Complicated mechanical and electronic control devices often necessitate special training and experience for maintenance and repairs. Spare parts are usually expensive and difficult to procure (import). As far as possible, the machines should be sturdy enough to withstand rough use and harsh climatic conditions. Furthermore, wearing parts should not only be easy to remove and replace, but they should also be of such a simple design that they can be produced locally.

Equipment suppliers for soil preparation equipment range from small to large companies, with varying degrees of commercialization offering a very diverse choice of products and services. The larger companies are usually better known, experienced in international trade and consequently reliable business partners. Small firms or their machines are often not so well-known, because of small advertising budgets, hence their list of references can be small in spite of a good product.

Personal visits to the manufacturer and/of sites at which their machines are in use should be undertaken as far as possible. The value of reference lists is to be able to meet or correspond with users, to learn about their experiences. If such lists do not contain addresses, these should be specifically asked for.

The "FOB" price (free on board) includes packaging, transportation and insurance costs of the machine within the retailer's country. This price can be artificially inflated in order to compensate for the reduction offered on the factory price.

It is advisable to include a penalty clause in the contract, to safeguard against late delivery.

In the case of an after sales service contract, the waiting period for repairs and maintenance must be clearly indicated. A detailed handbook should be provided, including specifications of all spare parts and a maintenance plan, indicating operations necessary and expected maintenance frequency.

Page data
Retrieved from "https://www.appropedia.org/w/index.php?title=Soil_Preparation_Equipment/5&oldid=628070"
Cookies help us deliver our services. By using our services, you agree to our use of cookies.
Categories:
About Appropedia · Policies · Contact · Content is available under CC-BY-SA-4.0 unless otherwise noted.