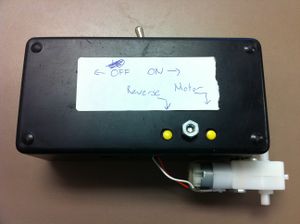 This prototype of smart motorized blinds was created by the Queen's Solar Design Team to put into a demonstration solar home. The prototype is based of the design from the www.instructables.com user biochemtronics.[1]

Though there are many blinds on the market that come with motors, they are often very expensive and do not have automatic elements installed. It would be more cost-effective to install a custom motor attached to a circuit box able to control the tilt of manual blinds based on ambient settings. The goal of this project is to open the tilt of the blinds during the day and close them at night, allowing natural light to fill the house during the day and giving privacy in the evening. Additionally, these blinds will contain a temperature sensor to close the blinds if the interior becomes too warm.

Automatic motorized blinds should be put on the south windows in a North American household as the south facade has more sun exposure. This placement will ensure that the blinds operate at the right times and will be able to measure the temperature due to the sun exposure more accurately. With the motorized blinds installed, it will be much easier to decorate the interior of the test house with living plants, while also eliminating the need to manually open the blinds for daily demonstration purposes.

The general design of the smart blind technology is based off of the schematic provided by a user on www.instructables.com named biochemtronics. Many of the components used in the original schematic were substituted to slightly different specifications, and to reduce shipping costs. One of the best designs for motorized blinds would be to create a box containing the circuitry and motor and simply attach the motor to the blinds via a hook. This will allow the smart blinds to be used on any set of venetian blinds.

In order to control a motor based on light and temperature readings, a microcontroller is needed. The PICAXE controller was chosen to be the optimal microcontroller after assessing the required functionality and cost. Though the cheaper PICAXE-08m would be satisfactory for this project, the PICAXE-18m2 model was chosen just in case more inputs would be needed for future alterations of the project.

There were two options to power the blinds: either to plug them into an electrical outlet via a transformer or to power it using batteries. To reduce the amount of installation required and the amount of wires needed for the design, the battery method was used. The PICAXE-18m2 microcontroller cannot support a voltage much higher than 5V, so if the batteries used exceeded 5V, a voltage regulator would be required. Using 4 AA batteries running through a 5V LM7805T voltage regulator powered the PICAXE controller, its outputs and the temperature sensor.

To make testing of the blinds easier, a 3.5mm Serial Jack was incorporated into the schematic so that the PICAXE controller could be reprogrammed while inside the motorized blind box. This jack can be accessed without opening up the box. In addition, two buttons were put into the schematic as a manual override to open and close the blinds. Lastly, a master switch was installed to save battery life when the blinds are not in use.

The following table outlines the approximate cost to build one set of blinds. Shipping costs are based on shipping to Kingston, Ontario.

There are many assumptions to this price list. Firstly, it assumes that this is the first time using a PICAXE microcontroller. The PICAXE-18M2 comes with the programmable USB cable (which accounts for most of the starter kit's cost) and a few other useful components. If the USB cable is already available then there is no need to buy a starter pack, putting the total cost of the blinds closer to $50. Additionally, it assumes that there are blinds already available, a few common resistors (two 10k resistors and a 22k), wiring, soldering equipment, and some sort of project box (or box that can hold the circuitry.).


There are three major steps in the physical construction of the blinds: creating the circuit, modifying the box and securing the components.

Every prototype of motorized blinds will have a different layout of components, even with the same schematic, depending on the components at hand. The schematic can be viewed in the picture to the right. All connections are soldered on the breadboard. The black PCB shown in the pictures comes with the PICAXE starter kit ordered from Solarbiotics. It contains the Darlington array, serial jack and the PICAXE-18m2. There are pads on the PCB where the power is attached, as well as the microcontroller's inputs and outputs.

It is important to make sure that the two manual override buttons are on the opposite side of the breadboard as the rest of the circuit. These two buttons should be accessible from the outside of the box through a couple of drilled holes. In addition, a master switch was placed between the positive end of the 4xAA battery pack and the input of the voltage regulator (not shown in schematic). 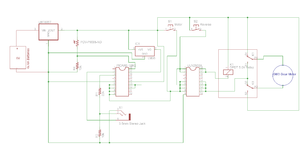 In order to make sure the motorized blinds box functions properly, it is important to strategically drill a few holes in the box. The box used in the prototype was left over from another project, and therefore has many holes that are not needed - the pictures should not be a model for aesthetics. The following is a list of holes needed to be drilled:

In addition, there should also be a small hole in the lid of the box to fit in the photoresistor. 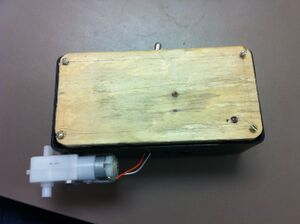 Back of the circuitry box. Note the Small hole for the photoresistor. Makeshift backing cut from spare plywood.
2 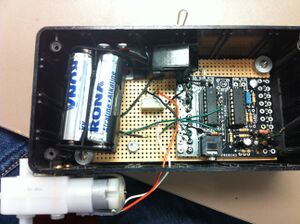 Inside the circuitry box of the motorized blinds.
3 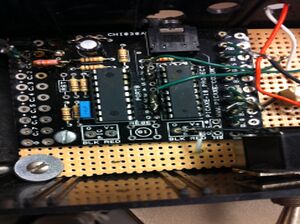 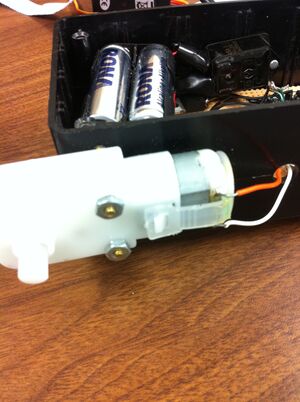 Screws used to attach the gear motor to the project box.
5 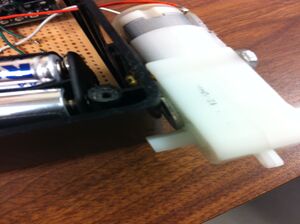 Close up of motor attachment to the project box. Note the placement of the washer to make sure the motor is secure and lies parallel to the underside of the box.
6 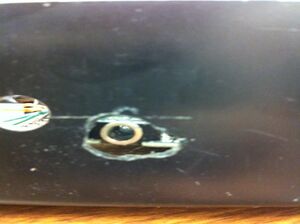 Hole in box drilled for access to the 3.5mm stereo jack.
7 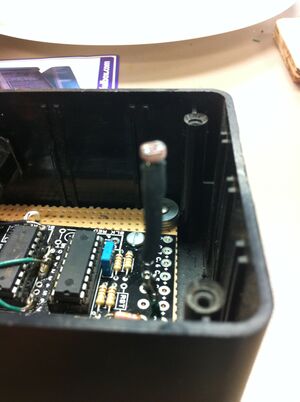 Photoresistor used to measure light. May be vaguely seen also in the view of the reverse side of the motorized blinds box. Black heat shrink tubing prevents accidental electrical connections and makes the resistor more rigid.

It is important to make sure there are as few moving parts within the box as possible. Anything that may be screwed in should be without compromising the circuit. The corners of the breadboard may be drilled and screwed into the box to prevent it from moving. If this is done, make sure that the circuit is not near any of the drilling areas. Tape may be used to keep the battery pack in place. It is very important that the wires of the photoresistor are long enough to let it protrude from the box, but do not touch. To solve this issue, heat shrink tubing was put on each individual photoresistor wire. If heat shrink tubing isn't available, electrical tape will suffice.

The software used to program the PICAXE may be downloaded here: http://web.archive.org/web/20110903015353/http://www.rev-ed.co.uk:80/picaxe/. This software gives the option of using either textual BASIC to program the microcontroller or flowchart programming. The code to program the blinds is as follows:

Please visit our website for more information about the Queen's Solar Design Team.