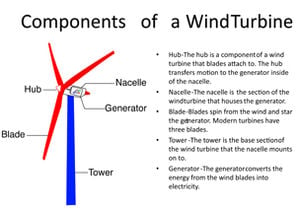 Figure 1: Components of a wind turbine

For a wind turbine, it is recommended to have a free acre of land to install the system on. This reduces wind turbulence, which is the result of wind passing over and around objects such as buildings.

Determine the amount of electricity that the system is required to produce. This calculation will aid in the decision making process of selecting the right wind energy system.

Government policies and incentives may reduce or increase the feasibility of installing a wind energy system.

First, estimate the total initial cost and maintenance costs of the system.

Second, use the following equation:

Third, compare the results in order to determine the feasibility of installing the system. 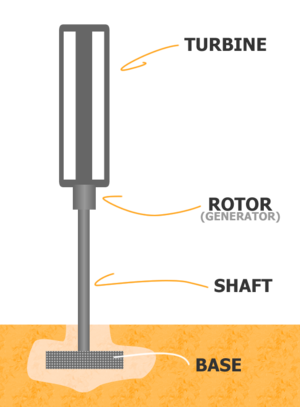 Vertical Axis Wind Turbines are a type of wind actioned turbines, which by force of wind applied to its blades, get to spin a rotor perpendicularly located against soil. Different designs are used for these systems.

Designs such as the Darrieus, Savonius and Gyromill Turbine are the most common and studied. Newer turbines, such as the Gorlov or helicoidal turbines are just being developed with promising results. Being far more eficcient, cheaper and even structurally stronger than older designs. The helicoidal turbine, mentioned is derived from the Savonius turbine principle, hybridized with the concept of a helicoidal shape.

It seems as there is a whole fight on what are the advantages of VAWT's against HAWT's. This is due to diversified thoughts on how durable, efficient and costly a VAWT system might be compared to the known and all proven up HAWT systems. In some sources you might find that these systems are prone to failing[3]even though in others you will find that the system is praised because of its simple mantainance needs[4][5] 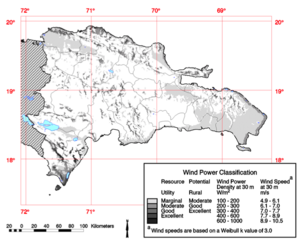 The Dominican Republic possesses windy land areas that range from good to excellent resource potential for large scale systems. This land covers 3% of the Dominican Republic. Using 7MW per sq. kilometer, it has been estimated that this land can be used to supply 10,000 MW. Twenty provinces possess greater than 100 MW capability while three more provinces possess 1000 MW capability.

As of now, there isn't any large scale projects operating in the Dominican Republic, aside from private households or companies that are using wind power individually.The most recent attempt at installing and operating a large scale system failed as investors decided not to continue to support the project.

Page data
Retrieved from "https://www.appropedia.org/w/index.php?title=Small_Scale_Renewable_Wind_Energy&oldid=631595"
Cookies help us deliver our services. By using our services, you agree to our use of cookies.
Categories:
About Appropedia · Policies · Contact · Content is available under CC-BY-SA-4.0 unless otherwise noted.