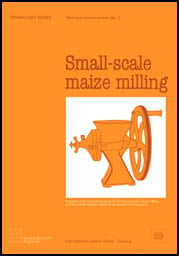 The processing of food grain plays an economically important role in developing countries for the following two reasons. First, processed grain is one of the most important elements in the diet of low-income groups, especially in urban areas where these groups are not equipped to carry out the basic processing of agricultural and animal products. Second, the use of appropriate technologies for the processing of grain may contribute to the achievement of important socio-economic objectives such as employment generation and the saving of scarce foreign exchange. Consequently the expansion of food grain processing should be carefully planned with a view to maximising the benefits which may be derived from it.

A number of developing countries have developed and promoted food grain processing techniques with a view to maintaining an adequate balance between small units, using labour-intensive or intermediate techniques (e.g. small plate, stone or hammer mills) and large units using imported, capital-intensive techniques (e.g. roller mills). Other countries have not been able to maintain such a balance and have favoured the establishment of large-scale milling plants to the detriment of small mills.

One factor which may explain this reliance on imported technology is the lack of technical and socio-economic information on alternative milling technologies. This lack of information also applies to other food processing sectors such as oil extraction, fruit and vegetable processing, fish processing and so on. Public planners and project evaluators from industrial development agencies have therefore tended to favour large-scale technologies for which information was readily available from equipment suppliers and engineering firms since they did not have information on small-scale technologies which were not widely used. Consequently, the International Labour Office has started a new series of technical memoranda on food processing technologies for wide dissemination among small-scale producers as well as public planners and industrial development agencies which have an important role to play in the promotion of these technologies. Eight such technical memoranda have already been published or are under preparation.1 Some of these memoranda are jointly published with the United Nations Industrial Development Organisation (UNIDO) and the Food and Agriculture Organisation of the United Nations (FAO).

1 Two technical memoranda on food processing (fish processing and oil extraction from groundnuts and copra) have already been published. Five other memoranda - in addition to this one - are at various stages of preparation.

This technical memorandum on maize milling represents a classical example of the choice of food processing technology. The issues raised relate to a wide range of factors which determine technological choice. These factors include the nutritional content of various qualities of maize meal, the location of mills, the transport of grain and product, the different shelf-lives of various types of meal, the employment effect of alternative milling techniques, the use of foreign exchange for the import of equipment, the organisation of production in different types of mills, the generation of backward and forward linkages, the marketing of maize meal, the prevailing legislation regarding the retail prices of meal and the supply of maize grain to various types of mills, and so on. These factors must be considered simultaneously when assessing the overall socio-economic impact of alternative milling technologies. Given the importance of such assessment, Chapter I is devoted exclusively to an in-depth analysis of these factors and suggests general guidelines for the formulation and implementation of various measures in favour of appropriate milling technologies. That chapter is of particular interest to public planners and industrial development agencies since they are directly concerned by the formulation and implementation of the above measures. It may be noted that although the chapter is exclusively concerned with maize milling, the issues raised also apply to any other type of food grain. Thus, the information contained in Chapter I may also be used for the formulation of similar measures concerning a large range of food grain.

The remaining chapters of the memorandum - Chapters II to VI - are of a mostly technical nature, and will be of particular interest to established or would-be millers. They provide detailed technical information on various aspects of maize milling, including grain preparation, shelling and milling.

The memorandum covers a narrow range of maize products, namely whole meal - produced by small-scale custom and merchant mills - and bolted and super-sifted meals produced by roller mills. Detailed technical information is mostly provided on milling technologies used in the former mills, since the detailed description of large-scale roller mills is outside the scope of this memorandum. Potential millers wishing to obtain information on roller mills should consult equipment suppliers listed in Appendix I of this memorandum.

The scales of production analysed in this memorandum range from one tonne to eight tonnes of maize per 8-hour day. These outputs are typical of those of custom mills and small-scale merchant mills. Roller mills with outputs exceeding 50 tonnes per 24-hour days are briefly described for the benefit of millers who may be considering investing in such mills.

This memorandum does not cover milling techniques used at the household level since its main target audience comprises, in addition to public planners and project evaluators, established or potential entrepreneurs planning to invest in a small-scale custom or merchant mill, or to improve an existing mill. Thus, manual milling equipment used by individual households or groups of households is not described.

Chapter V provides some general guidelines for an assessment of the requirements for various types of mills. Both material requirements (including the subject of floor areas) and skill requirements are covered. Chapter VI describes a methodological framework for the estimation of unit production costs with a view to enabling the reader to evaluate alternative milling technologies and to identify the one which is the most appropriate to prevailing local conditions.

The local manufacture of small-scale shelling and milling equipment is being undertaken by a number of developing countries. Any country should, a priori, be able to produce its own equipment economically as long as there is a sufficiently large market for it. Local manufacturers may use a number of available designs which may be obtained free of charge or for a relatively low fee. The only component which may need to be imported is the mill's or sheller's engine (electric or diesel-powered). The local manufacture of local milling equipment should be profitable from both the private and the social point of view since such manufacture will save scarce foreign exchange while generating employment (see Chapter I).

This memorandum does not describe all existing milling technologies. Rather, a choice has been made from among those which have been successfully applied by small-scale millers in a number of developing countries. Other technologies, not described in this memorandum, may also be adapted to local conditions and tried out in a few production units with a view to assessing their technical and economic efficiency. The bibliography in Appendix III lists the sources of information on those technologies.

Comments and observations on the content and usefulness of this publication can conveniently be sent to the ILO or UNIDO by replying to the questionnaire reproduced at the end of the memorandum. They will be taken into consideration in the preparation of additional technical memoranda.

This memorandum was prepared by J. Crabtree and G. Flynn (consultants currently working for the Tropical Products Institute in the United Kingdom) and M. Allal, staff member in charge of the series of technical memoranda within the Technology and Employment Branch of the ILO.

Page data
Retrieved from "https://www.appropedia.org/w/index.php?title=Small_Scale_Maize_Milling/3&oldid=627819"
Cookies help us deliver our services. By using our services, you agree to our use of cookies.
Categories:
About Appropedia · Policies · Contact · Content is available under CC-BY-SA-4.0 unless otherwise noted.