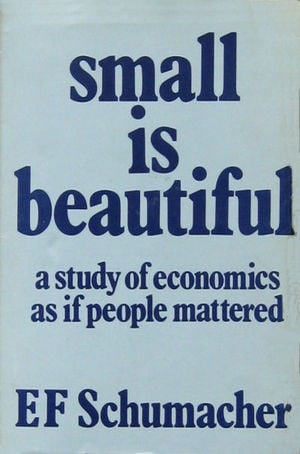 Small Is Beautiful: Economics As If People Mattered is a collection of essays by British economist E. F. Schumacher. The phrase "Small Is Beautiful" came from a phrase by his teacher Leopold KohrW.[1] It is often used to champion small, appropriate technologies that are believed to empower people more, in contrast with phrases such as "bigger is better".

Schumacher was a respected economist who worked with John Maynard KeynesW and John Kenneth GalbraithW, and for twenty years as the Chief Economic Advisor to the National Coal BoardW in the United KingdomW. He was opposed to the tenets of neo-classical economicsW, declaring that single-minded concentration on outputW and technologyW was dehumanizingW. He held that one's workplace should be dignified and meaningful first, efficient second, and that nature (like its natural resources) is priceless.

Schumacher proposed the idea of "smallness within bigness": a specific form of decentralizationW. For a large organization to work, according to Schumacher, it must behave like a related group of small organizations. Schumacher's work coincided with the growth of ecologicalW concerns and with the birth of environmentalismW and he became a hero to many in the environmental movementW.

The book is divided into four parts: "The Modern World," "Resources," "The Third World," and "Organization and Ownership."

In the first chapter, "The Problem of Production", Schumacher argues that the modern economyW is unsustainable. Natural resourcesW (like fossil fuelsW), are treated as expendable incomeW, when in fact they should be treated as capitalW, since they are not renewable, and thus subject to eventual depletion. He further argues that nature's resistance to pollution is limited as well. He concludes that government effort must be concentrated on sustainable development, because relatively minor improvements, for example, technology transferW to Third WorldW countries, will not solve the underlying problem of an unsustainable economy.

Schumacher's philosophy is one of "enoughness," appreciating both human needs, limitations and appropriate use of technology. It grew out of his study of village-based economics, which he later termed "Buddhist economicsW," which is the subject of the book's fourth chapter.

He faults conventional economic thinking for failing to consider the most appropriate scale for an activity, blasts notions that "growth is good," and that "bigger is better," and questions the appropriateness of using mass production in developing countries, promoting instead "production by the masses." Schumacher was one of the first economists to question the appropriateness of using gross national productW to measure human well being, emphasizing that "the aim ought to be to obtain the maximum amount of well being with the minimum amount of consumption."