European settlers arrived in the early 1850s and found good land for crops and livestock. Three early reports verify the abundance and variety of the foods produced in the 19th century.

Table 4.1 Agriculture in Humboldt County in the 19th Century 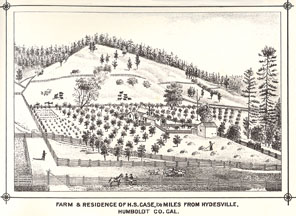 By 1892, there were 26 creameries. A salmon cannery was located at the mouth of the Eel River, and Fortuna had a fruit cannery.

The Fortuna fruit cannery was started in 1892 and by 1893, canned 25,000 cans of strawberries, prunes, plums, cherries, raspberries, currants, gooseberries, wild blackberries, huckleberries, pears and “pie fruits.” The Humboldt Chamber of Commerce reported the fruit cannery “ . . . has been of inestimable benefit to the surrounding country in stimulating fruit production, especially berries and small fruits for which the soil and climate of Humboldt are particularly adapted.” In one season, this cannery established a reputation for excellence of its product and easily contracted the whole output for 1893 at profitable figures.[2]

It should not be forgotten that one of the greatest apple experts in the world, George E. Rowe, vice-president of the American Pomological Society, has declared that Humboldt county contains some of the best apple-growing lands on the face of the earth.[4]

Albert E. Etter, Humboldt County’s famous plant breeder and strawberry grower, predicts great things for the small fruits and berries. He sees many spots which are capable of being transformed into veritable gardens of Eden, this without any fear of frost or pests.[4]

By 1927 Humboldt County farmers were winning numerous awards at the California State Fair. Seven first prizes for apples, four for varieties of wheat, two for barley and three for oats. Sorghum and maize also won first prizes. Four varieties of beans, crisp head lettuce, Swiss chard, sweet corn, spinach and three varieties of potatoes also took first-place awards. Many gold medals and third awards were also won in a large number of categories.[5]   From 1951, Humboldt County’s records show that agricultural output has been dominated by livestock and dairy products. Livestock and dairy products, which accounted for more than 90 percent of the dollar value in 1951, now account for more than 80 percent. Fruit, vegetable and grain crops have been a small proportion of the economic value of our agriculture since 1950. They peaked in the 1970s, reaching nearly ten percent, largely due to the success of the potato crops. Since then, fruit, grain and vegetable crops have represented about two to four percent of the economic value of agriculture in Humboldt.

Some parts of our agriculture may have declined, but this brief review demonstrates that local self-sufficiency is indeed possible.

Page data
Retrieved from "https://www.appropedia.org/w/index.php?title=Six_Rivers_Region_food_history_from_1850&oldid=622050"
Cookies help us deliver our services. By using our services, you agree to our use of cookies.
Categories:
About Appropedia · Policies · Contact · Content is available under CC-BY-SA-4.0 unless otherwise noted.