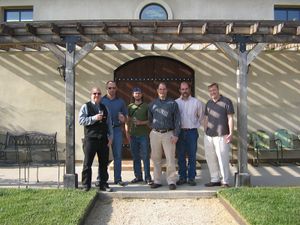 To research and understand the construction of a winery and the appropriate technologies incorporated within for the creation of a niche market in the Treasure Valley, Idaho.

Amador County in the Shenandoah Valley, California (elevation 1000 ft), outside of Sacramento in the Sierra Foothills.

When in Plymouth, CA we looked at two different scales of wineries; large scale (Montevina and C. G. Di Arie) and small scale (Cooper Vineyards, Young's Vineyards and Dobra Zemlja). Large scale wineries produce around 15,000 cases annually and small scale vineyards produced <5,000 cases annually. Wineries are an agriculture business and require larger amounts of water in order to grow different types of grapes in regions with dry environments with large amounts of sun. These environments have high water potential but the water has to come from somewhere. In the wine making process the grapes must be washed off before crushed, surfaces and tanks must be kept extremely clean because contamination can have a adverse affect on the taste of the wine, the grapes must be watered throughout the season, and any landscaping used to create a pleasant environment for tourists to come and taste tour wineries. 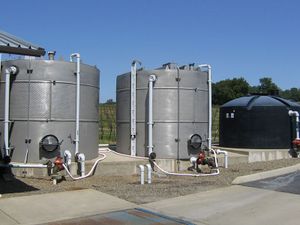 Grey water treatment systems were established at many of these wineries, the treated grey water was being used to water the landscaping and/or used for watering the grapes. The size of the winery (yearly output of cases) determines whether or not a permit will be required by the EPA for the grey water discharge. 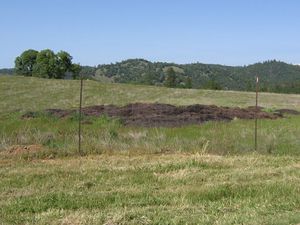 When your talking about a few hundred acres of grape vines, your going to have vine prunings that need to be deposed of. Grapes skins are not used in the making of white wines and are eventually filtered out before the final product of wine is bottled, 15,000 cases can produce a lot of grape skins and by products. Many of the wineries compost their grape skins and by products as well as the vine prunings. Mr. Cooper (Cooper vineyards) uses the cut vines and throws them in the middle of the rows. The rows are disked and the clods left so as to create a protective cover over the ground, this will help in the retainment of moisture in the ground. Drip irrigation was used at Cooper Vineyards because it is a more efficient method of watering, compared to sprinkler irrigation where moisture is lost by evaporation.

The buildings were constructed for the grape processing and wine storage. Copper vineyards wine maker, Michael Roser, suggests a minimum of 1 sq ft for 1 case produced, preferably 25% over in square footage, (2,000 cases = 2,500 sf) which would allow space for access to all barrels, which is important. One winery stood out in the engineering design in the building where the grapes were crushed on a second story so that the juices from the grapes were fed by gravity into large storage tanks; this would require a hill to build upon which may not always be available.

Another type of winery building facility that used the hillside to its advantage is the Dobra Zemlja winery. Built into the side of a hill similar to a cavern, this cave provides the perfect environment for storing wine without the use of an air cooling system. This facility also had a picnic area with a pond for tourists to hang out have some lunch, taste some wine and enjoy the afternoon at the winery. Most of the smaller wineries we visited had really nice grounds surrounding their winery facility for wine tasters to enjoy. 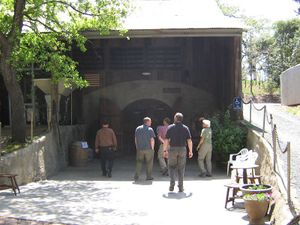 These wineries host events such as company parties and weddings, which seems to be a great way for people to taste the wine and walk home with a case or two of their favorite varieties. The aesthetic value of the winery grounds seemed very important, some of the wineries had very nice ponds, picnic areas, large ares for a band or reception of some kind, adding a personal and homey touch to the visitors experience. The winery with the most exquisite picnicking area and landscaping was Young's Vineyard; when we were there they were getting ready for a party with a couple thousand guests. 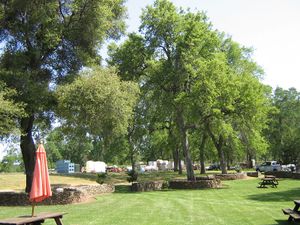 Frost can be a problem for grape vines and in order to keep the temperature high enough in the vineyards the wineries use windmills to push heat around the fields. The windmills are powered by a gasoline engine and propane is used to produce heat that is spread above the grapes keeping the frost off the vines. Mr. Cooper (Cooper Vineyards) says that the windmills are a crop saver, small wineries aren't exactly a huge profit maker so grapevines being destroyed by frost can be a hard hit for a winery. During times when frost can be a problem wineries can spend around $4,000 a month on propane which is very expensive. This method of preventing frost is an effective method but not an efficient method. A lot of energy goes into running these windmills, not to mention the exhaust produced by the engines used to run them. It is difficult to think of alternative ways of preventing frost when your dealing with hundreds of acres of grapes. Any ideas????? 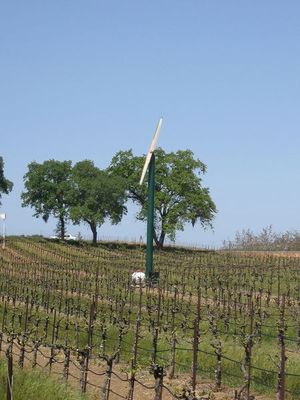 Fig 8:Windmill for frost prevention at Montevina
Retrieved from "https://www.appropedia.org/w/index.php?title=Shenandoah_valley_wineries&oldid=574947"
Category:
Privacy policy · About Appropedia · Disclaimers · Mobile view · All content is available under the CC-BY-SA-4.0 license unless otherwise noted.