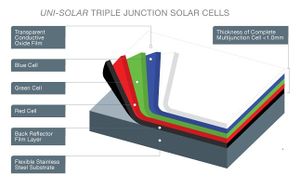 Hydrogenated amorphous silicon (a-Si:H) is a semiconductor material that is primarily used in industry for the production of photovoltaic cells. A-Si:H is deposited on a substrate by the process known as Plasma Enhanced Chemical Vapour Deposition, or PECVD.[2]

The amorphous material is deposited continuously onto the substrate in layers. This gives the material the ability to more effectively capture the broad solar spectrum and also improves performance stability. The manufacturing plant for United Solar is located in Auburn Hills, Michigan, and they use a roll-to-roll solar cell deposition process. The solar cells are deposited on 1.5 mile long rolls of stainless steel. The processor at United Solar can deposit nine thin film layers of the cell on six rolls of stainless steel at a time.[4]


By the Numbers[edit | edit source]

Looking at these numbers, one may wonder why 85% of the gases purchased by the company to produce amorphous silicon are not being used at all. The unused gases are scrubbed to meet environmental specifications and released into the atmosphere.[8] Instead of modifying the gases so they can be ejected, why not modify them so they can be re-used in the process? There are ways to separate and redirect the silane and hydrogen gases that are not consumed by the deposition process. A few new devices and systems would need to be put in place, but the cost of installing and using these systems could very well be much less than the money saved by recycling these gases. So by recycling silane and hydrogen, not only will there be fewer emissions into the environment, but photovoltaic cell manufacturers stand to make noteworthy cost savings.

Using silane (SiH4) gas in the deposition process of amorphous silicon can be beneficial due to the creation of highly uniform layers but can also be costly due to utilization rates of as little as 10 percent throughout the industry. A way to increase utilization rates and lower costs is to capture the gas used in the deposition process, refine it, and reuse it in order to fully utilize the silicon in the gas. Separating the spent hydrogen gas (H2) from the un-utilized SiH4 is simple and would be a cost effective way to increase the utilization rate for hydrogenated amorphous silicon.[8]

The patent for this process involves this separation of the hydrogen gases collected upon exiting the deposition reactor and recycling the silane into the entrance of the same reactor. It would require the use of a cold trap using liquid nitrogen and it is a vacuum process. This could cause a problem because silane is a very violent reducing agent and has a high affinity for an oxidizing agent. This process should have at least 50% of recovered material used, preferably 70% or even 80%. If you add on an additional step to purify the hydrogen in such a way that the gas feed content in the hydrogen is no greater than 100ppm then the amount of recovered material could go up as high as 85%.[9]

Contaminants that maybe likely in this process include:[9]
-Water; To remove the water a cryogenic distillation can be used.
-Dust Particulate; A filter can be used to remove the dust, or small solid chains of silicon, which may cause defects in the film.
-Fluorinated Compounds; Added cost to remove these due to another filtration system. These can be caused from compressor malfunctions in the process stream.
-Oxygen Gas; O2
-Traces of Dopants; PH3, B2H6, TMB 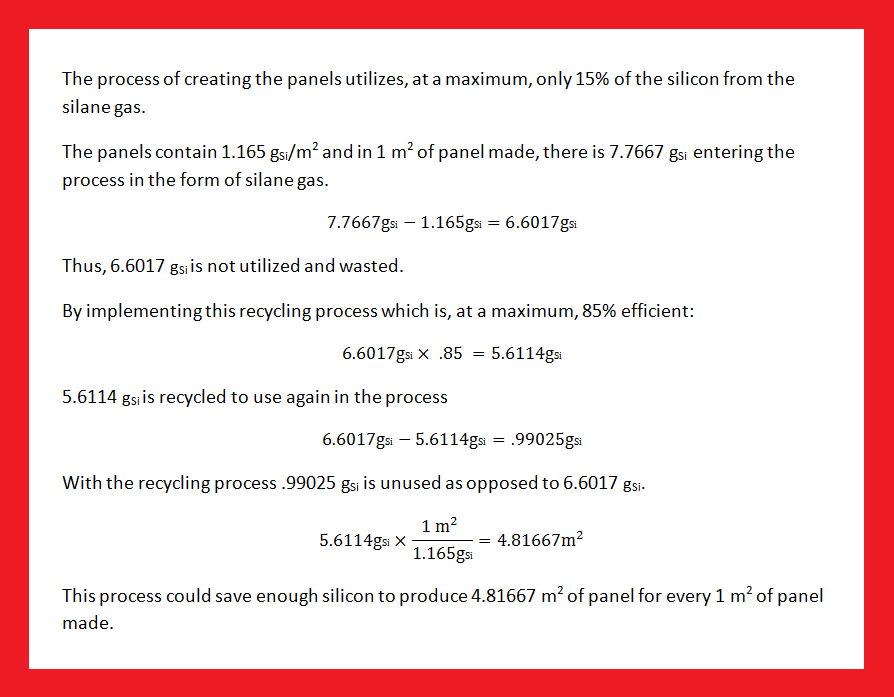 An alternative to straight recycling would be down cycling. This means that the amorphous silicon would be recycled and used for something of less value than reusing it to make more PV material. The advantages to this would be that the material still gets used and is recycled for another use but the disadvantage is that the value of the silicon would go down which doesn't help financially. You can also take the silane and expose it to air in a contained environment. When exposed to air the silane reacts with O2 and SiO2 is produced. SiO2 is a sand that can be used for the production of glass and other consumables.

The Silane Recycling Process would have to be implemented into the thin film hydrogenated amorphous silicon Plasma Enhanced Chemical Vapour Deposition process already in use at plants such as United Solar in lower Michigan as stated previously. The detailed Process Flow Diagram can be seen on page 2 in the patent documentation for Briend, et. al. or an overview of the process can be seen below. 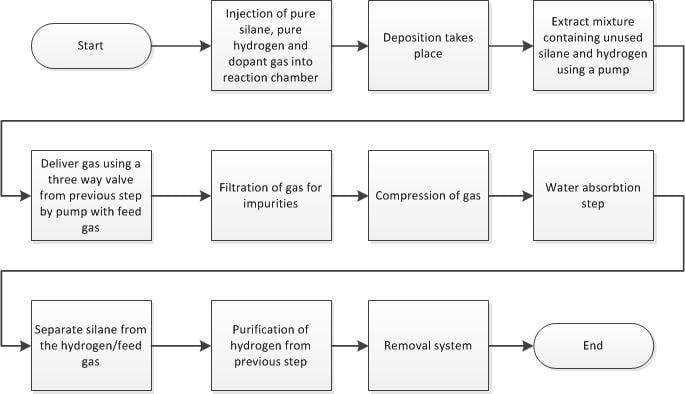 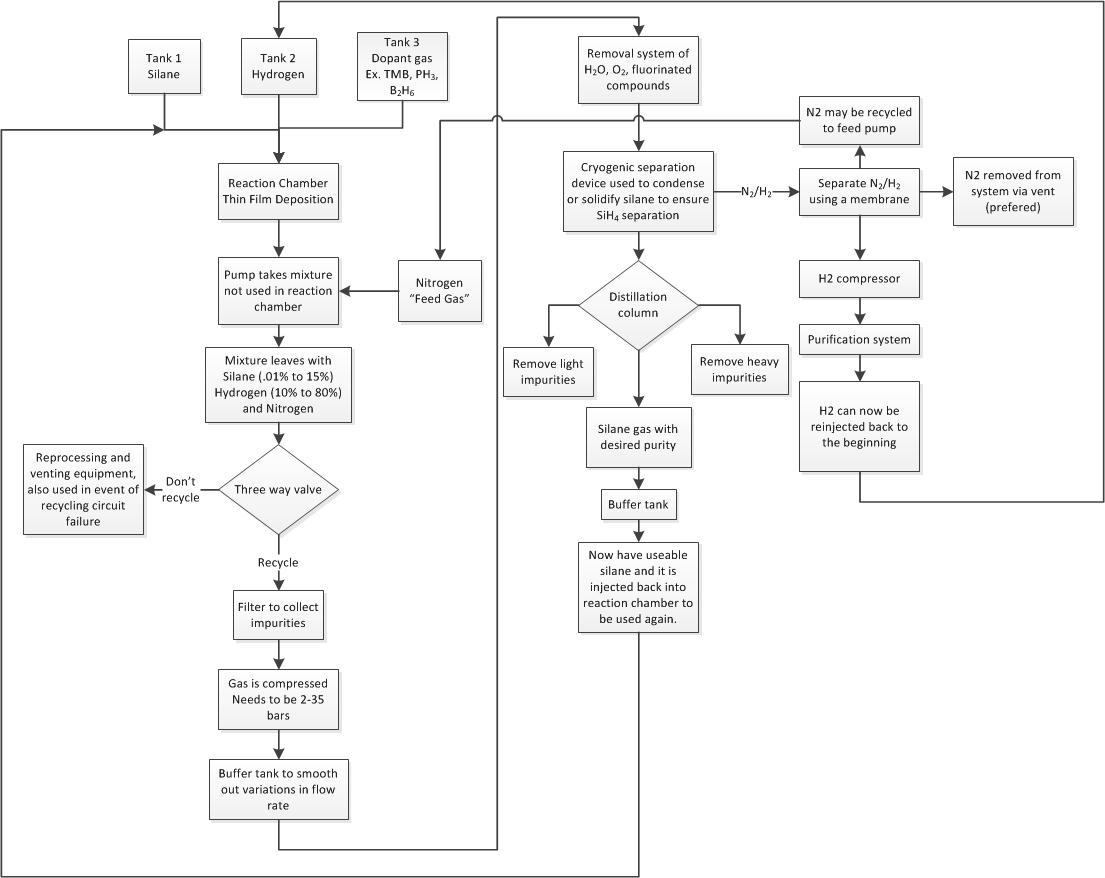 The primary cost contributor of this process would be the additional pumps required to move the gases being recycled. For example, an industrial vacuum pump manufactured by Edwards Vacuum consumes 7 kW*h which would add up to 61.32 MW*h per year at the absolute most, assuming full time operation.[11]
Some manufacturing issues that may arise due to the implementation of this recycling process can include, but not limited to:
-Fire; if the Silane is released into an oxygen rich environment. This can occur if the vacuum to the system is lost and an inert gas, such as the Nitrogen used as the feed gas, is not 60% to 80% of the surrounding environment being introduced into the system due to the lost of vacuum. 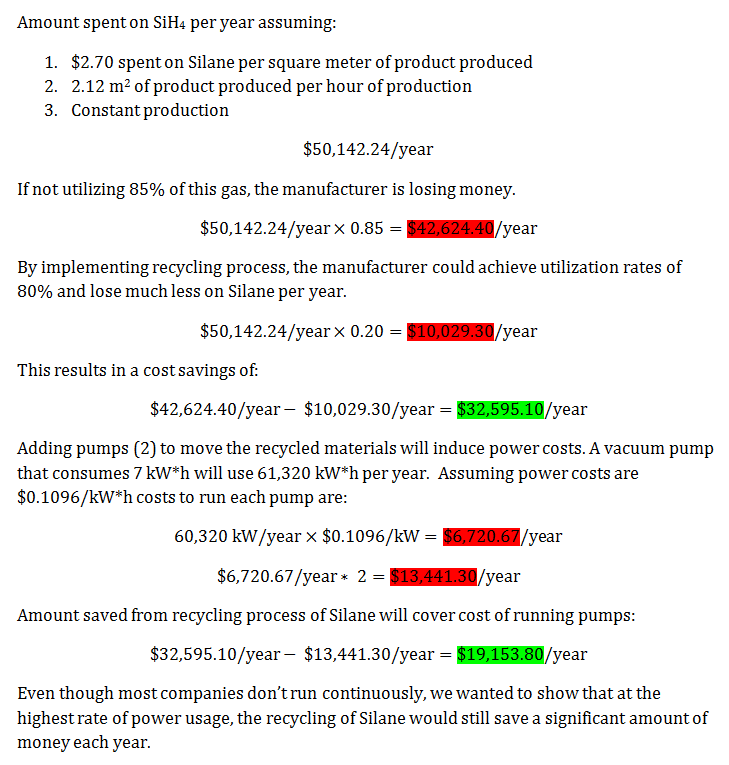 The silane safety in amorphous silicon operations can be seen in this link silanesafety
In the winter of 2011 United Solar had a silane gas leak and because of the safety plans that have been put in place, no one was injured and the leak was fixed properly. To see more on this click Video

If there is any leak of the gas or an equipment malfunction, a sensor will be able to tell and the system will be shut down. If the sensor fails, the worker should notice a drop in pressure if there is a leak and the building should be evacuated immediately. All employees will be trained to comply with Ocupational Safety and Health Administration (OSHA) rules of safety and always have access to safety documents requiring equipment, gases, and the workplace in general. Workers will be provided proper PPE (Personal Protective Equipment) for their specific job.

Another safety feature in place for production is the three way valve in place after the extraction of the gas mixture. This way if something is wrong in the mixture the gas can be redirected to the appropriate location.