GaAs crystallizes into a cubic zinc blend called a sphalerite with is similar to a diamond cubic structure.

GaAs only requires a few microns to absorb light (~5 microns)

typical g/m^2 assuming dimensions given above:

The steps to semiconductor processing are as follows:

Bulk growth of GaAs can be done through the Liquid-encapsulated Czochralski method(LEC). The semiconductor is grown from a seed crystal to ensure a dislocation free lattice. The GaAs is melted and placed into a quartz crucible. The melt is not in contact with the air but instead with boron oxide to prevent volatile gases from escaping. A seed is placed at the top of the quartz container at a cooler temperature than the melt. The crucible spins in a circle while the melt is pulled upward to the cooler temperature, thus solidifying as it is pulled. Average growth rates are from 1 to 5 mm per hour. The average diameter of the ingots is about 6 inches in diameter.

The top and bottom layer, approximately 20 to 50 microns is destroyed in the cutting process. The wafers are etched with an oxidizer while simultaneously polished to remove this layer. This step generates the largest recyclable liquid waste.

Epitaxy it the process of depositing a mono-crystalline film onto a mono-crystalline substrate. The substrate acts as a seed crystal because the deposited film takes on the lattice structure and orientation of the substrate. It is important that the film has a coherent crystal structure. Molecular beam epitaxy is an easy method of depositing solid films through vacuum evaporation. Molecular beams are used to heat a substrate in a vacuum. The beams contain the components of that will become the epitaxial film. The temperature of the beams is controlled to insure the correct intensity of the beams. The beams escape and condense on the substrate and grow into the epitaxial film. The process is kinetically controlled by adsorption of the constituent molecules and surface migration and dissociation of the adsorbed molecules, and by incorporation of the atoms to the substrate resulting in growth.

MBE can be simply represented by the following chemical formula:

MOCVD uses metal alkyls and hydrieds as a source of materials in a cold walled reactor. Some of the metal alkyls are TMGa (trimethylgallium), TEGa (Triethylgallium), TMAl (Trimethylaluminum), TMIn (Trimethylindiumn), and TEIn (Triethylindium). The methyl compounds are used more often because they have a higher vapor pressure that facilitates their attachment to the substrate.

The GsAs crystals are grown by placing a susceptor (material used to converted electromagnetic energy to heat re-emitted as infrared thermal radiation) inside of a quartz reactor. A TMGa and TMAl gas flows through a growth tube by bubbling H2.Gas molecules diffuse through layers in the substrate. The gas is mixed with AsH3 and the hot surface causes the gas to decompose in the absence of oxygen due to high temperatures above the substrate. The following reaction takes place producing GaAs because the decomposition products move over the surface of the substrate and find available lattice sites where they are incorporated into the lattice.

The previously described process can be represented by the following chemical formula:

As with many semiconductor processing techniques, waste is acquired during the production of gallium arsenide wafers. Utilization of materials is highly dependent on the process used to create the semiconductor. Final material yields for GaAs range from 15-40%[5][6] 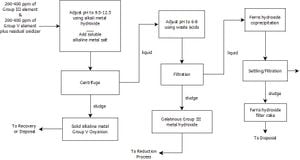 It is estimated the only 8.5% of the input materials from the semiconductor fabrication process above will be used in the final product. The reason for such little output from the semiconductor creation is that the final product must be 99.999% pure to be functional. Both liquid and solid GaAs wastes are created in the fabrication of semiconductors as mentioned above. The steps to GaAs recovery are listed as follows: 1. Separate Ga and As through chemical reactions. 2. Process "slags" for recoverable metals. 3. Undergo a reduction reaction to recover elemental gallium and arsenic.

The process for making pure GaAs for the fabrication of semiconductors involves several steps with little tolerance for impurities and mistakes. It is estimated that only 20% of the GaAs is actually usable for commercial grade semiconductors. In the processing of GaAs the following waste products are developed: liquids from etching, defective single crystals, wafers, epitaxial structures, and powders from the slicing process.S.A Kozlov et. all found through titration of semiconductor waste the weight percent of GaAs that can be recovered from the semiconductor fabrication process. Growth of epitaxial structures is 20-45%, crystal growth waste from rejected crystals is approximately 70% or less, rejected wafers are 6% or less, and powder waste after slicing is 40% or less.

Dopants added to the GaAs during semiconductor fabrication are extremely hard to remove from waste products. Some of the added dopants include: Sn, Ge, Pb, Cu, Ag, and Au. Processes do exist however, and are listed as follows: thermal dissociation, oxidation with oxygen, nitriding with ammonia, and chlorination with chlorine gas.

Vacuum heat treatment is used to remove moisture, dissolved gasses, and volatile compounds GaAs. The volatile compounds have a high vapor pressure in atmospheric air and a low boiling point. Such compounds include Cd, Zn, Mg, and alkali metals, all of which are more volatile than Ga. The process takes place in a quarts container with the Ga placed in a graphite well. The dynamic vacuum is held at a pressure of 0.013 Pa at a temperature of 900C for two hours.

GaAs must be extremely pure to be used in the semiconductor industry. Some of the most common impurities are Ca,C,Cu,Fe,Mg,Mn,Se,Sn. These elements should less than 1 micro gram per 1Kg of semiconductor. Al,Hg, and Zn should be present in concentrations of 5 micrograms per Kg of sample. Al, Cl, and Na are a little more tolerant and concentrations of 10 micro grams per Kg of sample.

These residual elements can be detected using a technique called Secondary Ion Mass Spectroscopy (SIMS). Dynamic SIMS detects the concentration of ions in a volume of semiconductor in parts per billion. SIMS operates by scanning a depth of material 10 to 20 angstroms thick. After the scan takes place, the layer is sputtered away and the next layer is examined. The sample size is usually 85 mm long and 20 mm thick. The sample is placed in an ultra high vacuum and an ion beam is used to eject ions at the surface. The ions on the surface of the sample are removed and their mass is analyzed to determine what elements the sample is made of. This is an excellent method to detect small impurities in semiconductors because it is done on an atom by atom basis.

As mentioned above, gallium and arsenic are separated using a thermal process and an aqueous waste process. As is usually not recycled because it is a low cost material compared to Ga. Gallium is an abundant element in rocks, however it is not highly concentrated with and average of 19 ppm. No concentrated sources of gallium exist. The gallium used is obtained from processing of other ores such as aluminum or zinc that have a low percentage of gallium which is later concentrated. Aluminum ores contain approximately 0.003 to 0.01% Ga.

Arsenic is currently not recycled in the semiconductor industry. Is is considered a low cost material and is usually discarded. However, it is possible to recycle As from both solid waste and from polishing waste water. To recycle As from solid waste, a zone refining method is used to separate arsenic compounds such as arsine. Zone refining works by causing a molten zone to travel along a solid rod. This process is carried out at 814 C and a pressure of 36 Atm. Impurities are more soluble in liquids than they are in solids and are carried away with the molten zone. The recrystallized material is purified where the zone starts. After the zone refining, the As must be reduced to an elemental state. This is done by reducing agents such as Hydrogen are aluminum. A negative aspect of handling arsine is that it is a toxic gas and has the possibility to spontaneously ignite in air.

The major costs associated with the recycling of semiconductors are associated with the disposal of waste. 50% of solid GaAs wastes made through semiconductor foundries are disposed of and 50% are sent to off-site facilities for gallium recovery.[8] It is estimated that approximately 10 tons of GaAs contains 5 tons of Ga and 5 tons of As. This means that there is a 1:1 ratio by weight for Ga and As. Approximately 100 tons per year of bulk GaAs crystals are produced in the United States, and roughly 75% of this is waste material. Estimates show that 37.5 tons of Ga and As each are waste. With Ga costing $900,000/ton this would total $33,750,000 in gallium waste. The waste for As would be 37.5*$45,0000/ton equal to $1,678,500 in arsenic waste. Combined waste for GaAs totals $35,437,500 per year.

Etching the GaAs in the production line accounts for a loss of 1 ton each of gallium and arsenic and a total loss of $945,000.

The epitaxial process operates at about 25% efficiency. Much of the material is lost as solids on the reactor walls. With this estimated efficiency, $1,687,500 of gallium and $118,100 of arsenic are lost each year.

As mentioned previously, Arsenic is highly toxic to the human body and must be handled with care. The following safety regulations should be acknowledged when handling recycled Arsenic:

Ventilation: To keep particulate matter from being inhaled and to keep recycled material from being contaminated before reuse, ventilation systems should be installed. Clean air should be continuously circulated to keep air breathable for all employees.[9]

Exposure Limits: To ensure no person is harmed during the handling of recycled arsenic, exposure limits must remain under 10 micrograms per cubic meter every 8 hours. All persons in contact should be equipped with the proper respiratory PPE and follow proper cleaning and replacement procedures related to that equipment.[10]

The Materials Safety Data Sheet (MSDS) for GaAs also outlines many of these safety procedures and cautionary warnings. It also outlines storage procedures which are important for both safety of the handler and purity of the sample. GaAs should be handled in dry conditions and stored under lock and key, only accessible to trained technicians.[11]

Page data
Retrieved from "https://www.appropedia.org/w/index.php?title=Semiconductor_recycling_plant_case_study_of_GaAs_photovoltaic_manufacturing&oldid=622235"
Cookies help us deliver our services. By using our services, you agree to our use of cookies.
Categories:
Maintenance categories:
Comments
Privacy policy · About Appropedia · Disclaimers · Mobile view · Content is available under CC-BY-SA-4.0 unless otherwise noted.
</html