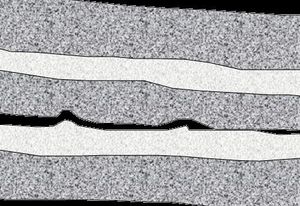 Polymer materials systems are often exposed to small scale damage. If these damages are in the form of cracks that are on a small enough scale, it is possible for the material to undergo autonomous repair. This process of self-healing without external inputs is meant to mimic the ability of biological materials to repair themselves. The polymer matrix is embedded with the necessary materials to complete a healing polymerization reaction over the damaged area.

Healing in these materials is achieved by addition of microencapsulated healing agent, and a catalyst to the matrix of the polymer. Small fractures move through the material and rupture the microcapsules, releasing the agent. The healing agent fills the crack through capillary actionW.[2] The agent then reacts with the catalyst embedded in the matrix, polymerizing across the gap.[3]

Conventionally the healing agent contained within the microcapsules is a liquid DicyclopentadieneW (DCPD), and the solid catalyst is Grubbs' catalystW. The catalyst initiates a ring opening metathesis polymerizationW of DCPD, where the driving force is relieving the ring strains in the DCPD to form a polymer. Microcapsule material is a urea-formaldehyde shell.[2]

Self-healing has been pioneered using epoxyW-type thermosetting polymerWs. These materials tend to be involved in laminated structures, as in Fig1., and also tend to fail in a brittle manner. Self-healing occurs best over planar surfaces, such as those created by delamination, or by small brittle fractures. As well the nature of the materials processing of thermosets allows for the microcapsules to be added to the material during formation.[2]

Elastomeric materials also represent an opportunity to apply principals of self-healing. These material's failures are tears, that represent somewhat planar areas that can be recovered by polymerization. There is a similar processing opportunity to add capsules and the catalyst in elastomers too.[2]

Adding microcapsules to the matrix of a polymer can help to increase its fracture toughness, as well as being part of a self-healing process. The strengthening behavior of microcapsules has been demonstrated to be even more beneficial to the strength of a material than the addition of solid particles. One complex effect of microcapsules is their ability to absorb the energy of a crack by rupturing.[4] More substantially, microcapsule addition to epoxy materials changes the crack plane morphology, suggesting that greater energy is being absorbed by the material than in the case of the neat epoxy.[5] The main changes in the morphology are the increased presence of hackle markings, the changed tail structure around capsules, and microcracks. For reference, it should be known that in the neat epoxy, the crack plane is mostly mirror-like and only exhibits hackle markings near the crack tip.

Hackle markings represent a rough surface between the crack plane that is created by sub-surface cracking that lifts small hair-like sections of the material. In a neat epoxy this zone is minimal, and is followed by a much larger smooth crack plane. With the addition of microcapsules, the zone of hackle markings dominate the entire crack plane as it propagates around the inserted spheres. An increase in hackle markings indicates greater surface area at the crack plane, therefore the material is absorbing more energy for the crack to move the same distance.[5]

When a crack plane encounters a particle within the matrix, it must diverge out of the plane to move around it. Where the crack plane reconnects on the other side of a particle is called a tail. When a crack encounters a particle its motion is halted until enough energy is present to move past it. With a solid particle, the crack will form a delta tail when the crack plane rapidly reforms on the other side of the particle. In the case of a microcapsule, the crack will form a step tail, which is postulated to indicate greater opposition to crack propagation than in the case of a delta tail.[5]Images depicting tails formed from solid particles and microcapsules are given below, in both cases crack propagation is from top to bottom.

Microcracking underneath the surface of hackle markings can also be witnessed in the propagation of cracks around microcapsules. These cracks further indicate that energy is being absorbed by the material and strength will be increased. 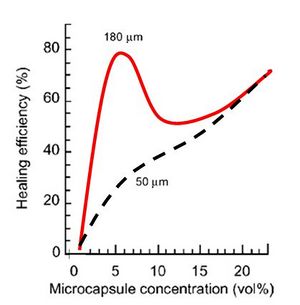 Fig. 4: Efficiencies of two sizes of microcapsules is shown. 180um capsules are the most efficient size. Based on data from Brown et al.[5] 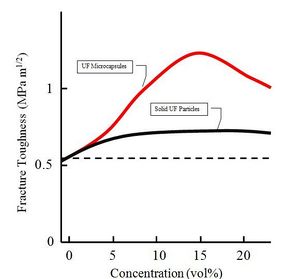 The rate at which the reaction occurs is a limiting factor in the self-healing of polymers. For DCPD to recover a significant amount of toughness, it can require up to 48 hours and 5wt% catalyst.[7] It is not only the static rate of recovery that matters, but also the dynamic rate.

In a dynamic fracture situation, the mechanical rate of fracture must be balanced with the chemical rate of recovery. If the fracture forms too quickly, recovery will not have time to occur. If the reaction occurs faster than the rate of dissolution of Grubbs's catalyst, insufficient mixing will put a limit on polymerization.[2]

The rate of healing of DCPD does not represent the fastest healing agent. 5-ethylidiene-2-nonbornene (ENB) is a faster healing agent, that requires less concentration. It was determined by Lee et al.[7]that the time it took for the healing polymer to go from liquid to gelationWand from gelation to vitrificationW for DCPD with 1.0wt% catalyst were 5 minutes and 50 minutes respectively. For ENB at 0.1 wt% catalyst, the times were 0.8 minutes and 8 minutes respectively. Therefore ENB is a much better healing agent in terms of speed and efficiency.

Current methods of microcapsule processing put lower limits on the sizes of the urea-formaldehyde spheres. The capability to produce capsules on a nano-scale is desirable, as it would allow for self-healing to be applied to nano-scale cracks, and spacings. With microemulsion polymerization, the current range of microcapsule sizes is 10um - 1000um.[2]

The conventionally used capsules of DCPD, begin to freeze at temperatures below 15 degrees Celsius, such that there is an operating temperature limit for these capsules. There exists an upper limit for microcapsule use as well, due to the urea-formaldehyde composition. The capsule itself tends to explode at approximately 200 degrees Celsius from interior pressure.[7]

An obvious limit to self-healing polymers is the resources available for healing within the material. Given the method of microcapsules and dispersed catalyst, there is only so much of each healing material that can be used to polymerize over cracks in a material. As self-healing is meant to mimic a biological reaction in the first place, it is thought that a solution to the longevity of these materials might be biologically inspired as well. Preliminary work has been done into implementing and modelling vascular networks to carry healing materials throughout a polymer.[8]

Self-healing mechanisms are limited to materials that present planar or non-irregular failures across short distances. For this reason, materials that experience ductile failure will not be candidates for this type of self-healing application. These failures occur with necking, over great distances, and with significant deformation, such that they cannot be repaired by autonomous self-healing.[2] 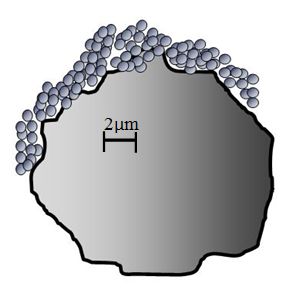 Microcapsules are created through a process of microemulsionW polymerization or in situ polymerization. In original work pertaining to self-healing polymers, the work was recorded as follows:

In this process, agitation is used to separate components into droplets. These droplets can then be controlled into desired polymerization reactions. It is by isolating droplets of DCPD, and polymerizing urea and formaldehyde around them that microcapsules of DCPD are formed. In in situ polymerization, the urea and formaldehyde first form a pre-polymer as they mix in water. As they gain molecular weight, these pre-polymers move to the interface of the water and the DCPD droplets. These pre-polymers become significantly cross-linked to form a smooth microcapsule. Gelation of this layer occurs with more UF deposites which increase the molecular weight. Higher molecular weight UF particles deposit themselves on the microcapsule creating a rough outer surface.[10]

With this process of microcapsule processing, diameters of 10-1000um are obtained with agitation rates varying from 20-2000rpm. Consistent over any conditions, it turns out that the shell walls varying in thickness from 160-200nm. On average microcapsules contain83–92 wt% DCPD and 6–12 wt% UF.[10]

In composite materials in general, there tends to be greater tendency to fracture where fibres or other constituents are present in a polymer matrix. This tendency is due to higher energy states associated with the interfaces between materials.[11] Microcapsules are by definition on the scale of microns, and therefore can only fit into comparably sized spaces. In nanocompositeW materials, the spacing between fibres can often be on a nano-scale. Therefore, the development of nanocapsules for use in self-healing materials is important in the development of better nanocomposites. Nanocapsules will be able to fit in very small sites, and the nanocapsules' healing abilities will compensate for the small fractures that occur at particle interfaces.

Healing taking place at these vulnerable sites within any polymer-matrix containing nano-constituents will mean even more beneficial material properties than the nano-constituents can provide alone. Specific examples such as carbon nano-tube implementation would be improved by the addition of a self-healing element.

As with microcapsules in an epoxy matrix, the capsule structure itself helps to increase strength specifically at sites between constituent particles. Richard and Chiao[12] have outlined high strength fiber-matrix composites in which "low volumetric resistance inclusions"[12]in the form of air, solids, or liquids are embedded where fibers are close together. In their case, the inclusions served to resist the volume changes of deformation and prevent cracking.

Since self-healing at the nano-scale has not yet been appeared in investigation, it is hard to tell what the quantitative efficiency increases would be in nanocomposite materials. Again referring to the example of carbon nano-fiber materials, the current limit of their bulk application is in the polymer matrices they are applied to. If the weakness of the polymer matrices can be overcome, the full potential of carbon nano-tubes may be exploited, which would represent a significantly strong bulk mechanical material. These types of materials could improve efficiency in countless applications. 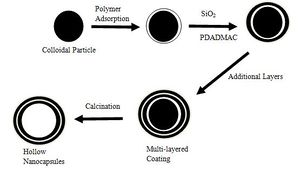 Fig. 7: Depicts the process of obtaining hollow spheres. Based on work by Caruso et al.[13]

New processing techniques need to be established to deal with encapsulating healing agents at the nano-scale. Colloidal templating is one such technique. The ability to deposit material onto the surface of a colloidW to achieve a shell in the nanometer scale range means that nanocapsules may be constructed. Where as this process has been studied, its use in self-healing polymers is a an appropriate extension of the principal.

It was established by Caruso et al.,[13] that alternating layers of silica particles (SiO2) and poly(diallyldimethylammonium chloride) (PolyDADMACW or just PDADMAC) could be constructed on polystyrene (PS) latex colloids (in the nanometer scale range), by electrostatic adsorption of SiO2 and PDADMAC alternatively from dilute solution.

It was subsequently established by Caruso et al.,[14] that the polystyrene centre could be removed by calcination,W as is seen in Fig. 7. For the hollow sphere to maintain its shape after calcination, there had to be a two or more layers of SiO2-PDADMAC assembled. The sphere diameter after calcination was 50 - 100nm, which would be applicable as nanocapsules. Also beneficial is the control available over the shell thickness based on number of layers assembled.

Healing agents such as ENB, or DCPD can be diffused into the nano-shells to create functional nano-capsules for uses in self-healing polymers.